Two of my favorite ingredients. 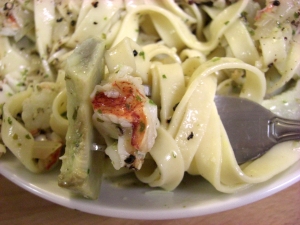 These are also two ingredients that have a reputation–at least here on the East Coast–as being somewhat more labor-intensive and expensive than you’d generally want to spend on a weeknight meal. (In California, the low cost and high availability of artichokes probably makes it an ingredient every man, woman, child, and house cat knows how to cook from birth. At least, I want to believe that.)

Don’t worry if you’ve never prepared one. You aren’t alone–when I was buying these at Harris Teeter, the checkout person looked at me with a quizzical look, and when I explained they were artichokes, she laughed and said, “I’ve never seen one in person before!”

The best trick to extrapolate from this dish is seasoning the artichoke and lobster separately before tossing them into the pasta.

A tragic story, in my opinion, because artichokes are my favorite vegetable by a wide margin, leaving second-place asparagus in the dust. Living on the east coast, they’re not always easy to find at a reasonable price–believe it or not, I paid five bucks each for these sort of old-ish looking specimens. But they’re worth every penny.

Because they’re thistles, artichokes have prickly parts–the tips of the leaves and the “choke” itself in the center of those leaves. Beyond that, they come in two slightly different shapes, colloquially called “boys” (longer, taller artichokes) and “girls” (rounder artichokes that don’t come to a point). The former are especially good for serving steamed or boiled, the tips of the leaves snipped off, the choke removed, and the cavity stuffed with herbs. 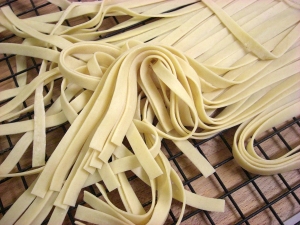 The “girls” are better candidates for this type of preparation, where we pare the artichoke down to its tender heart and stem. To do that, there are a few easy steps. With the larger outer leaves, fold them back toward the stem until they break, then pull them off. Then cut the top off, scrape out the choke, and use a knife to cut off anything that isn’t white or very pale green.

If you haven’t done this before, this is a good recipe to start with, because after the artichokes have cooked, you’re going to cut them into strips. This gives you a second chance to make sure the artichoke really is tender and you didn’t miss any fibrous bits. When it comes to the stems, there’s a simple rule: the older the artichoke, the more aggressive you want to be with cutting off the sides of the stems. For very large artichokes, I end up leaving the stem almost intact, then splitting it in half like a marrow bone and scraping out the tender inside while leaving the inedible fibrous exterior on the plate.

Oddly enough, we’ve talked about lobster’s preparation in the post for Yesterdish’s lobster and corn risotto, but we haven’t talked about the history.

Here’s a bit of good lobster advice (and one bit of very bad lobster advice) from the October 3, 1825 edition of the The (London, England) Morning Post:

Yikes. If you want to torture animals, you don’t need a recipe, you need therapy. 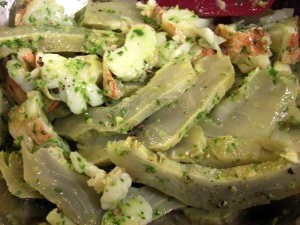 Saveur quite correctly labels as apocryphal the oft-repeated fable about John D. Rockefeller accidentally tasting his servant’s lobster stew in 1910 and elevating lobster to a higher status. Impossible, if for no other reason than that lobster was already viewed as substantially good food by 1910–perhaps not a luxury good, as such, but it was enjoyed extensively in the finer dining establishments, as well as in the lobster salads prepared by New England grocers.

I think the problem with this history is that people tend to view lobster’s status as binary–that there was a time when it wasn’t considered important or valuable, and then it became a luxury good. In reality, its fate was quite a bit like oysters: the better we understood them, and the better we were able to prepare them and preserve them, the more we wanted them.

Everything you’ve heard about lobsters in the 18th century is basically true to one extent or another: lobsters were sometimes fed to prisoners, indentured servants, and even animals; Native Americans would occasionally use them as fertilizer. In essence, the abundant lobster populations of New England were considered a nuisance. They’d end up on the beach and go bad. You couldn’t really transport them without them spoiling right away, and even when you did, there was something not quite right about the meat. 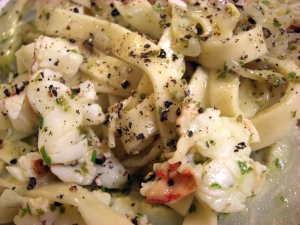 By the early 19th century, we knew enough about lobster that people who knew how to cook them would go to the beach and intentionally pick them up. From there, the introduction of canneries (which we talked about in the post for salmon and pasta salad from Winston-Salem, North Carolina) created a way that lobster meat could be harvested and transported with minimal spoilage.

But by the middle of the 19th century, it was the flow of people into New England that changed lobster’s fate. People who had tried the canned version, but heard from their aunt or uncle that the fresh item was far superior, now had the means to travel to a restaurant by the ocean. Curious tourists wanted to taste the genuine article and restaurants were happy to provide the means.

By 1910, at the time when Rockefeller supposedly tasted his servant’s lobster stew, restaurants all over the coast served things like boiled lobster, fried lobster, lobster stew and even “lobster chops”–a lobster croquette formed into a lamb chop shape with a claw for the bone. Not exactly a servant’s food.

Like anything else, the cost of lobster increased as the supply diminished. By World War II, lobster was classified as a luxury good in the rationing system, which meant that it wasn’t rationed. Those with the means to afford the finer things ended up eating lobster a lot more frequently, if for no other reason than that they couldn’t get as much steak as they wanted. That practice is what cemented lobster’s perception as “the thing missing from the table with caviar, champagne, and truffles.” 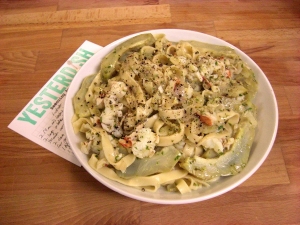 A few odds and ends: if you want to use a dry pasta for this recipe, that’s okay, too. I prefer fresh tagliatelle because artichokes and lobster are both delicate so a delicate pasta works well, but it’d be delicious with dry pasta, too. The mixture of butter and flour stirred into a hot liquid to thicken it is what the French call a beurre manié, or kneaded butter.

The best trick to extrapolate from this dish is seasoning the artichoke and lobster separately before tossing them into the pasta. In that pan, you aren’t going to have enough control over the pasta to ensure every piece of lobster and artichoke is seasoned well. This way, we don’t leave anything to chance, and every bite is perfect.

One of the positive effects of the Food Network (and there are negatives–lookin’ at you, Ina Garten) is the democratization of ingredients. When I was a kid in the 1980s, lobster was almost a punchline. It showed up more in conversation for comic effect than it did to actually refer to the product, because the perception of lobster was so tied to a socioeconomic class that invoking its name would be like putting on airs.

Not so on the Food Network, where lobster is as likely to show up on Diners, Drive-ins and Dives as it is on Iron Chef. It’s an ingredient–an expensive ingredient, a delicious ingredient, but at the end of the day, an ingredient, no better or worse than pizza dough or candy corn or a White Castle hamburger. And it’s actually easier to cook than all three of those.

So get cooking, already. (And invite me over.)

Salt and pepper to taste

Slice lobster and artichoke. Toss in: