The crisp stuffed triangles we typically identify as samosas. 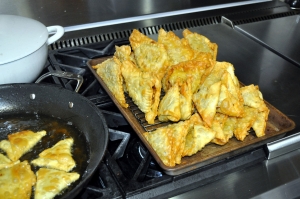 Thanks to the curry-in-a-hurry restaurants that stipple our cities, we associate sambusas with the subset of Punjabi cuisine that we like to call “Indian food.” But they’re probably not Indian in origin, and they travel under lots of different variations of that name.

(This is a topic for another post, but it’s astonishing that more people don’t realize that there are dozens of regional Indian cuisines that in no way resemble the items we’re familiar with. I think I’m not being unfair to say that the average American legitimately thinks that India is a nation of 1.2 billion people and fifteen menu items.)

My mother grew up with them in Eritrea as sambusas, a name also used in Ethiopia, Somalia, Tajikistan, and in parts of Afghanistan and Uzbekistan. They’re samsa in Turkey, sanbusak in Egypt and Jordan, and samuza in Myanmar.

The succulent richness of a well-cooked lentil both carries the toasted spices and provides contrast to the crisp, salty crust. But personally, I’ve never passed on lamb and cumin when that’s an option.

People just tend to associate them with India because we don’t have many Somali, Uzbek, or Burmese restaurants in most towns. Or Eritrean, for that matter, although Washington, D.C. is an exception. So how did so many cultures come up with the same recipe under similar names? 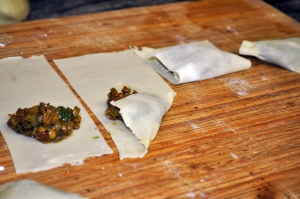 It was Persian traders who proliferated the recipe, and likely the name, too, which is thought to derive from the Persian words sam and būsa, meaning something akin to “even” and “a geometric measurement.” Put together, it means something like “even edges,” which the hypothetically triangular treats have. But the name has stuck to the half-moon versions, which has two entirely un-even edges.

So was this Persian in origin? Probably, but it’s not entirely clear. Most sources seem to cite the work of a 10th century Persian historian, Abu al-Hasan Ali ibn al-Husayn ibn Ali al-Mas’udi, as having first referenced the recipe for sambusas in his encyclopedia Meadows of Gold. According to al-Mas’udi, someone recited a poem by Ishaq ibn Ibrahim of Mosul at a banquet that described in detail the preparation of sambusas.

Fair enough. But I’m still wishing we had better source materials. While there are translations available online, I can’t find the original in Meadows of Gold, even in the comprehensive 19th century French translation. That could be only because the later translation I linked to is so over-the-top poetic that it retains none of the original structure. At the same time, there are enough legitimate scholars involved in this process that I would attribute my failure to find the original to my ignorance (and the lack of a complete English translation). 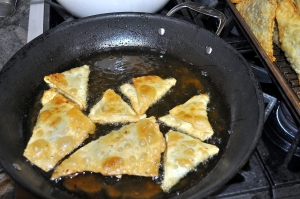 Even accepting this evidence, it doesn’t, by itself, pin down with certainty the origin of sambusas. If, for the sake of argument, sambusas pre-existed in the horn of Africa, there wasn’t a written language to record them until about the 6th century, when Syrian monks started to translate books of the bible into a script developed to create a written form of Ge’ez; that practice stopped in the 7th century, and written forms of Ethiopian language don’t show up again until the 13th century, right about when the first recipes show up in India.

Such is the problematic nature of tracking food that traveled through the Islamic Persian empires, which, in the 10th Century, covered much of the Middle East and Central Asia. You never know whether the appetizers are coming or going. Not that it matters, for the purpose of enjoying them.

Because of the diversity of options in making sambusas, we’ve provided five different filling recipes below; we made two varieties here, the lentil and the chicken and potato. I think the only ingredient we haven’t really discussed that you may find exotic (or not) are the leaves of the curry tree (Murraya koenigii). 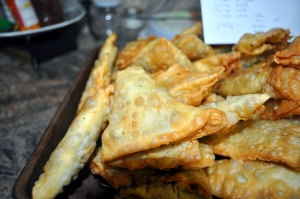 Curry leaves aren’t present in curry powder, but they are often added to curry-like preparations in native Indian cuisines. Typically, they’re either fried with the aromatics in quantity, where the cooking tames the flavor, or they’re added sparingly at the very end. Their favor is complex; herbal and citrus-y with a hint of nutty, bitter umami. If you can’t find them, don’t stress over it, but I wouldn’t try to substitute anything for them, either.

Lentil sambusas are the ones that exceed expectations most frequently–the succulent richness of a well-cooked lentil both carries the toasted spices and provides contrast to the crisp, salty crust. But personally, I’ve never passed on lamb and cumin when that’s an option.

In the Horn of Africa, sambusas are particularly popular during holidays. I think they’re too good to serve just a few times a year. If egg rolls, empanadas, and jalapeno poppers can become recurring guests to our tables, then the even more diverse sambusas ought to be invited.

Click on the name to expand any of the filling recipes.