And a look at ravioli history. 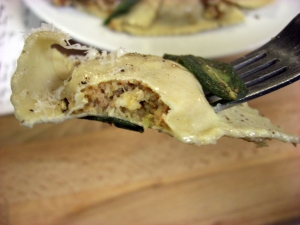 This has been one of those weeks were absolutely everything has gone wrong. (Understatement.) I realize that nobody particularly gives a damn, so I guess I should post something.

Yeah, anyway, my point in starting out that sentence was to say that I had wanted to make something a bit more innovative–a lamb ravioli, something that isn’t at all traditional. But when the grocery store didn’t have any non-ground lamb for less than $25, I opted for a $5 package of pork short ribs and a couple of sausage links.

And so, instead of exciting new ravioli, I made a recipe pretty close to some of the earliest ravioli. Still, it was good enough for the last eight hundred years of Italians.

Pork ravioli should be light and tender, a counterpoint to the crisp sage and crunchy walnuts–and all of it is rich, in a good way.

We first discussed the history of pasta in the post for Yesterdish’s potato gnocchi, so if you haven’t read that or want a refresher, give it a once-over. Otherwise, let’s pick up in the 11th century, when Italians started boiling a flour and water paste they called maccheroni. 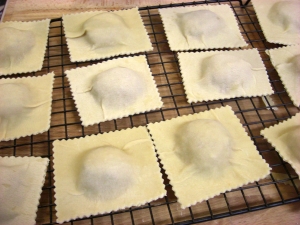 Another use for a paste of flour and water was to line a vessel and enclose a filling in a savory pie, or torta. In Emilia-Romagna, small, boiled half-moons of stuffed maccheroni paste would be described as “little pies,” or tortelli (which ultimately would give us tortellini, or little little pies).

Ravioli themselves, under that name, emerged at some point around the 12th century, although the origin of the name is disputed. By the 14th century, we get a recipe, albeit somewhat indirectly–in notes left by a Venetian merchant.

Francesco di Marco Datini was part of a new trend in art–he would buy pieces for non-religious buyers based on the quality of the art, without a focus on a particular medium. He made quite a bit of money in this practice, and would write his wife and daughter (born outside of the marriage) letters about his business, travels, and observations. Ultimately he died in 1410 without any male heirs, and since only men could inherit property at the time, he left his estate (both physical and fiscal) to the care of the poor.

In 1870, renovation on the property revealed hundreds of thousands of papers and hundreds of books of his business. In one of these, Datini described a ravioli made with pork, cheese, herbs, eggs, and sugar that were deep-fried in lard and then finished with sugar. What, you thought fried ravioli was a modern invention? 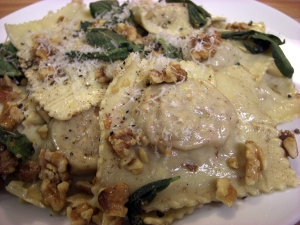 At the time, making pork-filled pasta was an elaborate process, because you had to grind the pork with a mortar and pestle. Cheese-filled pastas weren’t too far behind; by the 16th century, Bartolomeo Scappi’s Opera dell’arte del cucinare mentioned a ricotta-stuffed, tortellini-like pasta.

So let’s look a bit at our recipe, here. The first thing you’re likely to notice is that, unlike wontons, the meat for ravioli must be cooked before it’s ground. That’s because wontons are cooked for longer and have more durable wrappers. Ravioli are delicate, and are only cooked until they float; if you boil or fry ravioli enough to cook raw filling inside, the pasta would be horribly overcooked. (And as I pointed out in the post for Yesterdish’s garlic and Parmesan pasta chips, this is why you shouldn’t substitute wonton wrappers for pasta and vice-versa.)

If you don’t have a meat grinder, but you’ve got a food processor, this is one of the few times when a food processor is an acceptable substitute. Chopping and grinding aren’t the same thing, but all you’re really trying to do with the meat is get it to a fine enough texture that you can mix in your other ingredients. 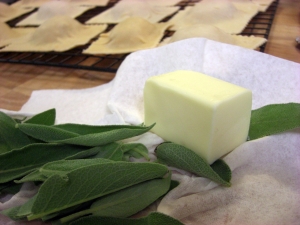 And this is about texture. Pork ravioli should be light and tender, a counterpoint to the crisp sage and crunchy walnuts–and all of it is rich, in a good way. To achieve that, you have to test your filling before you stuff the ravioli.

Take a tablespoonful of the filling and press it onto a cracker as if you were starting to make ravioli. Then microwave it for twenty seconds, take it out, and take a bite. It should be moist and adhere to itself, but fall apart with just a touch of your teeth. And as long as you’re tasting, hey, taste for seasoning, too. I adjusted the amounts in this recipe when I tasted mine and realized I needed more red pepper flakes.

As usual, don’t make a big production out of cutting the ravioli into the same size. If you’re so obsessive that you need to have them identical sizes, use a ravioli cutter. Personally, I’ve never had anybody turn away a plate because one ravioli had a little more along one edge than the other.

Makes about 4 dozen ravioli, depending on size.

Saute mirepox, persillaide, salt, pepper, and red pepper in olive oil till fragrant. Add pork and sausage and cook through, about 8 minutes on medium heat. Grind using a fine plate or food processor.

Add nutmeg, Parmesan, saltines, milk, and egg. Mix with hands till it holds a shape. To test seasoning and consistency, microwave 1 Tbsp. on a saltine for 20 seconds and taste. Adjust as required.

Make 5 eggs of dough, or amount desired (leftover filling can be frozen). Roll as thin as possible. Brush with water; place Tablespoons of filling about 2.5 inches apart and cover with second sheet, pushing out air as you seal. Cut.

Saute nuts and sage in butter. [After three minutes, turn fire down to warm; if you aren’t working quickly, remove nuts and sage with a slotted spoon so they don’t overcook while you’re cooking the ravioli.]

Drop ravioli in simmering water till floats. Remove with slotted spoon to sauce.