A little something we brought home from a party. 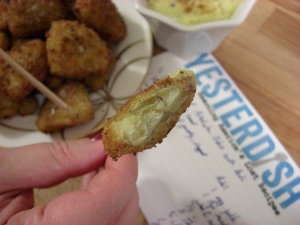 On Saturday, kat&dori celebrated Kat’s birthday at the Topaz hotel in D.C. While Dori made the desserts, the hotel provided the food, and among the offerings was a simple and delicious option: canned artichoke bottoms that were quartered, breaded, fried, and served with aioli.

Sometimes, when something is really simple, you can forget how great it tastes. Your memory tricks you into thinking it can’t be as incredible as you think it is.

For example, you think right now that you know what an ice cream sandwich sold by an ice cream truck on a hot summer day tastes like, or a bag of honey-roasted almonds in Central Park, or a milkshake and french fries–but I assure you, if you tasted one right now, you’d realize you don’t remember.

Good aioli, like a good date, ought to make you a little nervous, then very happy.

Artichokes, lemon, garlic, and salt are one of those combinations. We’ve enjoyed them for hundreds of years. Topaz’s additions were an emulsification of the lemon and garlic (the aioli) and using breaded artichoke bottoms instead of halved or quartered baby artichokes. 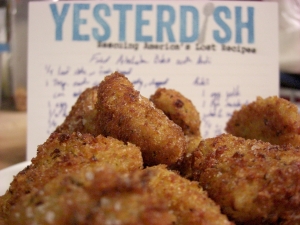 “Baby” artichokes, that is. It’s a misconception about artichokes that small artichokes are necessarily young. In Europe, they sometimes are, but not in the U.S. What we call baby artichokes are the thistles harvested from the bottom of the artichoke plant, where the shade from the leaves prevents the artichokes from getting enough sun to grow. The primary difference between the two is that actually young artichokes don’t have a choke at all, while the fully-mature-but-starved version has a smaller, typically edible choke.

An interesting quirk of fried artichokes, writ large, is that they’re a bit like frybread–a tribulation food. In the 16th century, Pope Paul VI sequestered Jews into one area of Rome. Within the Jewish ghetto, a different culture developed, including its own dialect and its own cuisine, formed out of the cheapest foods available: eggplants, salt cod, and artichokes–particularly small ones.

Over the centuries, the smaller, trimmed artichokes, fried in egg and flour and dressed with lemon and salt, became an iconic Roman food–so much so that when Italian immigrants came to the U.S., their hunger for artichokes led to a new market. 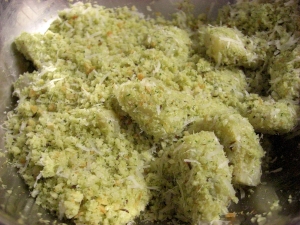 While French and Spanish immigrants planted artichoke fields in the 19th century (in Louisiana and California respectively), the artichoke wasn’t really commercialized at the time. Recipes that call for artichokes in most 19th century and early 20th century American publications are really talking about Jerusalem artichokes, which are now known as sunchokes (a marketing name someone invented in the 1960s).

Jerusalem artichokes are native to North America, and they do taste a bit like artichokes. The two plants are distant cousins with a common ancestor, the sunflower. One theory about the name “Jerusalem” is that Italian immigrants called the plants girasole, the word for sunflower, as the root vegetable grows bright yellow leaves. Sunchokes can be fried or boiled, just like artichokes, but usually a giveaway is that the recipe will call for them to be peeled. While we peel and eat the delicious stem on artichokes, you couldn’t really describe the process of trimming a proper artichoke as “peeling.”

Domestic commercial cultivation of artichokes had to wait until the 1920s, when a sugar beet farmer in Salinas decided he could make more money leasing his land to Italian farmers and suggested they grow artichokes, expensive in the U.S. because they had to be imported. While the large artichokes sold fairly well to everyone, the Italian community had an insatiable taste for the smaller, more familiar artichokes.

Which is where Ciro “Whitey” Terranova comes into the picture. 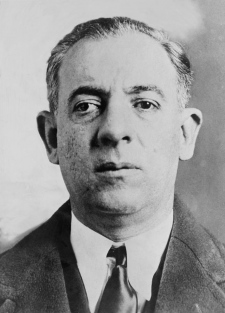 Terranova was Born in Sicily in 1888, but moved with his family to New York when he was about five. The family traveled, doing farm work in Texas and Louisiana, until they finally settled back in New York. Over the years, Terranova got involved in the Morello crime family, and by the 1920s, was in charge of the 116th Street Crew in Manhattan.

Terranova knew a bit about agriculture and a bit about artichokes. He started buying all the artichokes shipped to New York from California at $6 a crate, then selling them for around $8. If a grower wouldn’t agree to sell to Terranova, his fields would be mysteriously hacked to pieces. If a grocer wouldn’t stock them, the Crew would pay him a visit and rearrange his feelings on the matter the old-fashioned way.

It got to be so bad that, on December 21, 1935, New York Mayor Fiorello La Guardia announced a ban on the sale, possession, or display of small artichokes. As reported in that day’s Edwardsville (Illinois) Intelligencer:

The ban was lifted three days later after the distributors agreed to stop selling to Terranova’s importing operation, which closed. Terranova was “put on the shelf,” which is to say, younger gangsters in his outfit suggested to him, quite politely, that it might be time for him to retire, before he had an accident. He died of a stroke three years later, never serving a day for his million-dollar-a-year artichoke racket. 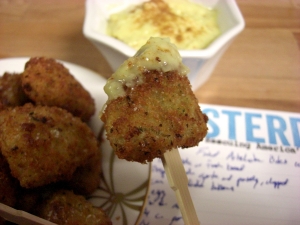 A few words about aioli–it’s sometimes described as garlic mayonnaise, but it’s not quite the same. Both are emulsions of oil, acid and egg yolk, but aioli is made with olive oil, which would generally be considered too strong for mayonnaise, and a large amount of mashed garlic. In the traditional preparation, garlic is mashed with salt in a mortar; I cream it by chopping through it, pressing down on it with the side of my knife, and chopping through it again. I also like my aioli to be tart enough that it tends to surprise at first bite.

Good aioli, like a good date, ought to make you a little nervous, then very happy.

For the bread crumbs, I used leftover Zabar’s rye, which is both quite sour (as bread goes) and full of caraway seeds, and both Dori and I agree it gave the artichokes a really nice touch. You don’t have to do the same, but I’d endorse it. (I have another use for the rest of the loaf, but you have to wait till next week.) I mixed it with persillade, which we talked about in the spaetzle post.

Yes, you can make the aioli in the blender or food processor, but it’s really not that hard to do by hand, and you’re less likely to break it by beating it too hard. As Jacques Pepin has said, your arm will fall off before you over-beat an emulsion by hand. Meanwhile, if the phone rings while the blender is going…

So there’s my re-creation of Topaz’s homage to the Roman tradition of fried artichoke and lemon. Yes, it’s obvious and easy, but sometimes obvious and easy is still incredibly delicious. (I guess you could insert another dating analogy here, but I’m too classy* to know about it.)

* By classy, I mean unpopular. I don’t even get to sit at the cool lunch table when I’m eating alone. I put my food on one table and sit somewhere else.

To make the aioli, beat together the egg yolk, mustard, and lemon juice. Slowly add oils while beating. Cream together garlic and salt, then add creamed garlic, black pepper, and lemon zest to the aioli. If too thick, thin with lemon juice. Refrigerate for half an hour.

chop bread in food processor with garlic and parsley (or persillade) until crumbs. Mix grated Parmesan into crumbs.

Beat egg and milk together.