Dori’s favorite meal from growing up. 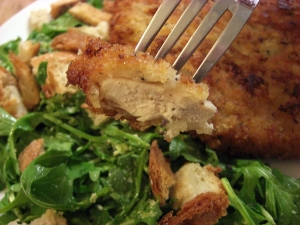 Chicken cutlets are one of those things you probably think you’ve tasted, but you really haven’t. It’s not really like fried chicken, or a breaded chicken sandwich, and it’s certainly not like the chicken parmesan you get at the hoagie place (but we’ll talk about that too, later).

A chicken cutlet is a crisp crust with a succulent, tender interior, the fresh herbs in the breading slowly ebbing from the bite until there’s nothing but a clean, ricotta-like finish. A cook who can make a proper cutlet knows he doesn’t have to shout to be heard. It shows that control isn’t about minimalism.

In a world of chicken dishes that want to be Guy Fieri, the cutlet is still Julia Child.

There’s a subtle harmony to a chicken cutlet; you first taste the fried herbs in the breading before the chicken falls apart in your mouth, leaving a mild warmth that encourages you to have another bite.

Just like last week’s brodo with meatballs, cutlets were a favorite both at home and when Dori and I visited our grandparents. We didn’t really understand the process of their creation–we simply took it as an article of faith that this magnificent arrangement of golden-brown, melt-in-your-mouth deliciousness had its origin as a chicken at one point in its history. 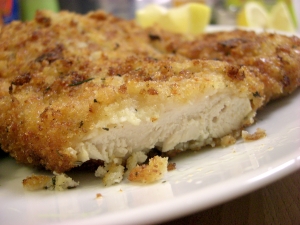 Little did we know.

Chickens aren’t born mild-tasting and rich. Actually, to be frank, a fresh chicken tends to taste a bit like the barnyard it came from–something that classical recipes treated with tannins and acidity or exploited with umami in recipes that, today, call for a pullet or capon, something with an intense, overwhelming chicken flavor that must be dealt with because it can’t be ignored.

While the modern chicken has been engineered to obscure that game-y undertone, it’s still present. But it can be removed with milk and time. The calcium and lactic acid act on the flesh in ways that may or may not tenderize the meat (depending on who you believe), but which certainly draw out substances that convert the flavor from its fowl origins into something closer to milk-fed veal.

In fact, it’s likely that chicken cutlets in Italy started as an alternative to veal, but trying to determine the origin of the veal cutlet in Italy is like chasing a ghost. Many of the supposed origins don’t seem to pan out when you look for the documentary evidence.

For example, some sources say that it started as a poor man’s iteration of what was considered a treatment for heart ailments in the Middle Ages–covering food in gold dust. While it does look like eating gold was viewed as having some kind of medicinal benefits (ranging from generalized longevity to treating seizures), the only mentions of dusting food with gold are ones used to justify cutlets. 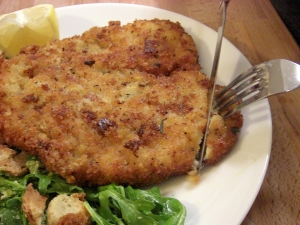 Still others cite a recipe for a veal cutlet in Martino da Como’s “famous manuscript of 1492.” I genuinely haven’t the foggiest idea what they’re talking about. The work that Martino is most famous for, Libero de Arte Coquinaria, was published around 1465. Martino was certainly alive and well in 1492, and he wrote several other books, but I wouldn’t describe any of them as “famous manuscripts.” As for the 1465 work, Maestro Martino suggested pounding veal or other meat with the side of a knife to flatten it out, then rolling it up with herbs and lardo inside and grilling them on a spit.

Those are spiedini. Delicious, to be sure, and a grandparent to involtini, but a distant cousin to the cutlet we’re talking about today.

The earliest actual mention of something we could say resembled a breaded cutlet is in a document from the mid-12th century nitpicking details of the feast of Saint Ambrose of Milan. Some sources describe the dish, lumbolos com panicio (little chops with breading), as being the third of nine courses, but if you actually look at the Latin, I’m pretty sure the whole meal is nine plates served in three courses, meaning that this was actually close to the end of the meal, rather than toward the beginning.

Sigh. Okay, fine. I’ll take a crack at translating this, but it’s been a long time since Latin classes.

(If you’re a Latin guru and can correct me, please comment and do so.) From this evolved the cotoletta alla milanese, the fried, breaded, bone-in veal cutlet. With veal, leaving the bone in was a quintessentially Italian thing to do–it helped prevent the meat from drying out.

It’s likely that at some point during Hapsburg occupation of Milan, the breading used in the milanese overtook the original flour-coated schnitzel recipes. While the Germanic cuisine enthusiasts (I can’t believe that’s a thing) occasionally dispute that, the timeline seems pretty clear.

By the time veal cutlet recipes started to appear in American cookbooks, they were in much the same forms we’d expect to find them today. Consider this recipe for veal cutlets from 1837’s Directions For Cookery, In Its Various Branches by Eliza Leslie (image from the 1840 edition):

Of course, what really popularized this style of cutlet in the United States was the recipe for veal and/or chicken Parmigiana, explained in this blurb from the September 9, 1927 edition of the New Castle (Pennsylvania) News:

There’s really no Italian antecedent that uses meat, but there are two influences in Italy. The obvious one is the eggplant parmigiana, which was properly a casserole in the style of a greek moussaka. The other was something called something like peche d’ovo, a wartime meat substitution of egg mixed with bread crumbs and fried, then allowed to cook in a tomato sauce to finish.

But cutlets? Not particularly.

While it’s true that Italians describe anything (other than a pizza) with tomato sauce and mozzarella on top as alla parmigiana in the same way spinach makes something “florentine,” they don’t generally do it to cutlets. Eggplant, gnocchi, zucchini, polenta–absolutely. But as a general principle of Italian cuisine, you don’t often see vegetarian sauces on top of meat dishes. That’s a dead giveaway that the origin is external to Italy, just as it is with spaghetti with meatballs in a tomato sauce.

I don’t think these need to be parmigiana’d.

A truly great chicken cutlet, like the ones we grew up with, is a memory you never quite shake. There’s a subtle harmony to a chicken cutlet; you first taste the fried herbs in the breading before the chicken falls apart in your mouth, leaving a mild warmth that encourages you to have another bite. 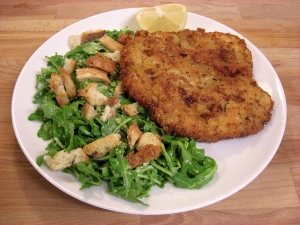 Some notes on this recipe to achieve that goal: while the traditional second step in the breading is milk and egg, I’ve moved to buttermilk, which adds an additional element of intrigue in the result. And don’t be intimidated by the number of steps in this recipe. None of them are any more difficult than smashing something with a mallet or dipping something in a bowl. If you can fill a chip with guacamole, you can make a cutlet.

Marinate for two hours in: