One of the many reasons why there’s no such thing as leftover beer. 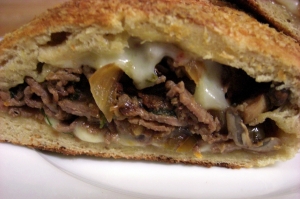 Anyone who enjoys the occasional beer has experienced the peculiar sense of loss that accompanies waking up and stumbling into the kitchen or living room to discover they’d left a half-finished beer sitting on the counter. That loss is multiplied exponentially if you’re a fan of microbrews or seasonal brews.

Cooking can ease the pain of that loss. You could make a batter for onion rings or fish, obviously (which is a lovely thing to do with a citrusy shandy or chelada-style brew). You could make a cheese soup or a chili with it, or use it as a marinade, or, if you’ve got a stout, make one of the various chocolate desserts that Guinness is famous for inspiring. And there’s always beer bread.

So why not a beer pizza dough that you can use to make a calzone?

The unparalleled umami of beef and mushrooms surrounded with creamy cheese, wrapped in a crust that’s crunchy on the outside, but soaks up every drop of juice from the meat on the inside.

And if you’re making a calzone, why not fill it with the contents of a cheesesteak, a sandwich that is a natural ally of beer everywhere? Because beef and beer combined are a religious experience. Just ask Philadelphia’s own Ronald “Mac” MacDonald!

Amen, brother. Catch you at Flipadelphia. 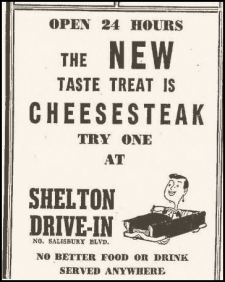 But unfortunately, there’s a dark side to this holy trinity: the origin of the cheesesteak is one of those topics that forms religious cults out of otherwise reasonable epicures. I feel it necessary to point out that there is no iteration of the story that isn’t an outrageously stupid thing to take pride in. “Inventing” a cheesesteak is like “inventing” a chicken salad sandwich when someone has already invented chicken salad and a tuna sandwich.

How dumb is the argument? Well, most places seem to agree that South Philly hot dog vendors Pat and Harry Oliveri invented a sliced steak sandwich with onions on a roll in 1930. That part is easy. But the debate, then, is who added cheese to these sandwiches.

Some partisans say it was an employee of Oliveri-owned Pat’s King of Steaks in 1952. Others say it was added by competitor Geno’s Steaks when it opened in 1966. Bear in mind, the cheeseburger was invented sometime between the mid-1920s and the mid-1930s. 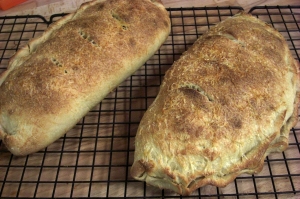 Either way, the headline here is, “It took someone over two decades to think to add cheese to a steak sandwich.” I wouldn’t take too much pride in being the second biggest idiot in a two-man race. It’s like an argument over who realized you could breathe through your nose first.

The calzone (the name is Italian for “pant leg”) isn’t nearly as controversial. They originated in Naples, the home of pizza, and likely came about as a cousin of the authentic Neapolitan pizza fritta.

If you’re not familiar with fried pizza, you can see a bit of the process in the 1954 slice-of-life film L’oro di Napoli, where it played the second most delicious thing in these clips, next to Sofia Loren (and a bunch of other people who have the bad taste not to be Sofia Loren):

One of the earlier mentions of calzone stateside was in Mel Heimer’s “My New York” column, from the September 25, 1961 edition of the Kitanning (Pennsylvania) Simpson’s Leader-Times:

Curiously, while fried pizza is almost nonexistent here in the U.S., fried calzones aren’t all that hard to find, at least on the East coast. Ordinarily, my preference is to fry calzones, then finish them in the oven for a couple of minutes, but for a calzone that’s supposed to evoke what’s best in a cheesesteak, a baked, more traditional texture seemed preferable. 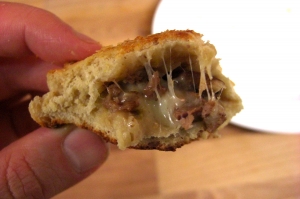 And it does satisfy both cravings–the unparalleled umami of beef and mushrooms surrounded with creamy cheese, wrapped in a crust that’s crunchy on the outside, but soaks up every drop of juice from the meat on the inside. Even the last bite (pictured to the right) carried every constituent flavor.

So don’t waste time arguing over who added cheese to a cheesesteak. Just add beer to the outside of it and bake it.