A salad so good, the recipe could only have come from poetry. 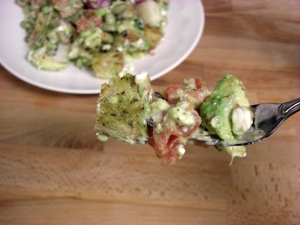 Of all the things I’ve made for get-togethers, the recipe for this panzanella is probably both the simplest and most requested. At times it’s been called “guac-zanella” because most of the ingredients in a slightly different arrangement could make a guacamole.

In the version I typically make, the main flavors are tomato, avocado, goat cheese, green onion, red onion, garlic, chile pepper, salt, and pistachios (this time I used soybeans because my sister was over and she’s allergic). But the textures are just as important. The bread, crisped in the oven with garlic and parsley, soaks the tomato liqueur into itself, then falls apart in your mouth.

It’s a good enough recipe to deserve to endure as long as it has. Panzanella predates not only the Italian language as we know it, but the tomatoes that are a key element to what we enjoy today.

The contrast of textures, from the crisp but soft bread to the goat cheese and avocado slowly melting into the lemon juice and tomato liqueur, is the magic of panzanella–and to truly capture it requires a moment of patience.

Some sources point Boccaccio’s 14th century work the Decameron as the first reference to panzanella because he references a food he calls “pan lavato,” or washed bread. 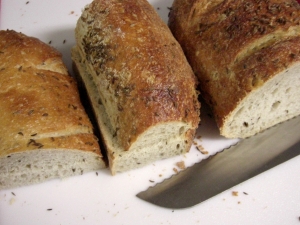 I’m not convinced. First, we haven’t the foggiest idea what that actually means, and second, a more natural reading, knowing nothing else, is that this was what they called a sop, a tradition much older than panzanella of dipping bread into something and eating it. The name panzanella itself combines the words for “bread” and “basket,” suggesting something beyond bread.

Now, many descriptions talk about the traditional Tuscan style of soaking stale bread in water, then wringing it out. But the closest thing we have to an original recipe suggests using toasted bread.

The earliest reference to something we are sure resembles panzanella is from “In lode delle cipolle,” or “In priase of onions,” a poem by Agnolo di Cosimo, a.k.a. Il Bronzino, a 16th century portrait artist who worked for the House of Medici. Here’s a passage from an 1822 reprinting with a bit of translation:

I should probably (briefly… hopefully) explain why there aren’t really any translations of this work online. The short answer is that it’s not exactly in Italian, as such.

The longer answer is that there wasn’t really an official Italian language until the 19th century. Until that time, the various city-states in Italy spoke slightly different localizations of Latin that evolved toward an Italian language. But Latin itself was fractured between Classical Latin, which was used by writers, scholars, and patricians, and Vulgar Latin, which was used by the vulgo (that is, the masses). 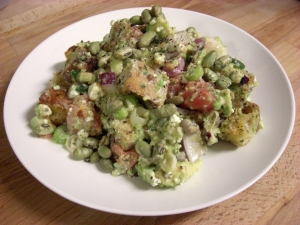 While these languages interacted to a degree, Classical Latin developed into a dialect spoken by the nobles of Italy and influenced by the languages with whom they interacted–primarily French and Spanish. Meanwhile, the masses spoke a language influenced by Spanish, French, Turkish, Arabic, or whoever else happened to have owned part of the country at a given time.

In the 13th Century, Dante degli Alighieri wrote La Comedia (later the Divine Comedy) in the vulgate dialect common to his location of Florence, and over the centuries, writing in the language of the common people became more socially acceptable. But in the 16th century, it had not yet entirely replaced the Italian used by nobility–particularly not with someone being paid by the House of Medici. Il Bronzino was writing to an audience familiar with poetry he was parodying.

(The larger context of the work is that he’s mocking some of the writers who talk about the power of love. He compares love to eating an onion and finds the onion to be as good, or better, than love, for reasons including that onions start not only with the eyes but with the nose and that onions “linger” with you as long as love does.)

Fortunately for me (and all of us), I happened to know someone who had to spend three years of her childhood translating pre-vulgar Italian works into modern Italian, and who could navigate the task of muddling through parts of a poem where verbs weren’t gendered in quite the same way or didn’t exist at all, anymore. Thanks, mom! 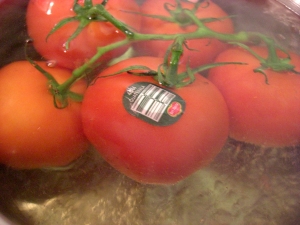 So we know that in the mid-16th century, we had a salad with toasted bread, olive oil, acid, and red onions. We’re short an ingredient to the modern panzanella, the tomato. It’s the liqueur of the tomato that pairs with the bread and gives the salad its incredible texture.

Il Bronzino worked for Cosimo I de’ Medici. The first recorded mention of tomatoes in Italy is actually in a letter from de’ Medici sent on October 31, 1548, where he mentions receiving a shipment of tomatoes successfully. But they weren’t used in the salad, because at the time, tomatoes were considered an ornamental plant. Ponder that–while Bronzino wrote about onion panzanella, de’ Medici put tomatoes on the table as decoration.

Tomatoes are members of the nightshade family. Europe was familiar with a related plant, one they called belladonna after they found that it could be used to infuse eyedrops that would dilate a woman’s pupils to make her look seductive. They also found it could be used to kill someone via poisoning. Besides, tomatoes grew on the ground. How hungry would you have to be to roll the dice and eat a tomato, really? 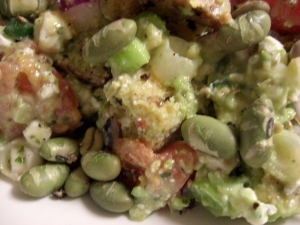 It wasn’t until the late 17th century that tomatoes were consumed in Florence, and even then, they were dried, stewed, or otherwise prepared in some way. I’ve looked for the earliest reference to a tomato panzanella but either my Italian isn’t strong enough or the sources that say it dates to the 20th century are correct.

Either way, the panzanella I made here has evolved substantially from its red onion and vinegar roots. I prefer lemon juice, because the garlic and lemon play well together. If I’d had fresh basil, I’d have used that, but what with it being November and all, a little dried oregano is nice, too.

Timing is critical with panzanella. You shouldn’t eat the salad right when you mix the bread in; it needs a few minutes to soak in the dressing. The contrast of textures, from the crisp but soft bread to the goat cheese and avocado slowly melting into the lemon juice and tomato liqueur, is the magic of panzanella–and to truly capture it requires a moment of patience.

It’s something you see a lot of in Italian cuisine, from affogato (coffee and ice cream) to suppli al telefono (fried rice balls stuffed with cheese)–food that relies on a fleeting contrast of texture and intensity of flavor. Panzanella is the perfect firework to accompany a comfort food, like lasagna or chicken cutlets–the accent that lets you taste each soothing bite anew–or as the centerpiece of a light lunch.

Cut bread into approximately 1″ cubes. Toss with 1 Tbsp. each of garlic and parsley; add olive oil to coat. Bake at 375 for 20 minutes or until toasted.

When in season, use fresh basil instead of dry oregano. Silken tofu marinated in chile paste can sub for goat cheese.