Just in case sixteen of your best friends want to visit the bayou. 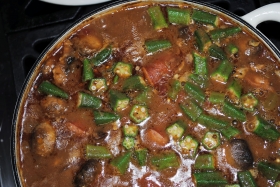 I’ve talked about the origin of my love for Louisiana and its food before, and gumbo is part of that love. It’s one of the most famous dishes from the region. Even those who have never tasted it remember Hank Williams singing about it in 1952: “Jambalaya, crawfish pie, filé gumbo…”

This creates a curious gap between awareness and understanding. Ask someone to name three dishes from Louisiana and you’re likely to find gumbo in the list. Ask that same person to define gumbo and you’re likely to get a series of aborted attempts. “It’s like, you know, there’s, uhm…”

And if you’ll forgive the personification of your dinner, that don’t bother gumbo none. Because gumbo is, in many ways, the perfect encapsulation of the Louisiana mystique.

When you go to the market not knowing what you’ll find, you’re well on your way to planning a fantastic gumbo.

Gumbo was being made before any attempts to record the recipes of Louisiana–it’s a tradition so old, in fact, that not only doesn’t anyone know whether it began as Cajun or Creole, but nobody is inclined to argue about it. To the extent Cajun and Creole food are cousins, gumbo is a grandparent, beloved and belonging to both.

What every Louisiana cook will debate, however, is what defines a gumbo, and what constitutes gumbo orthodoxy. 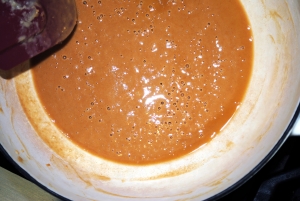 Food writer Stanley Dry has written a bit about the problems with defining gumbo. Certainly it is always thickened, although what thickens it has changed substantially over time; and the modern iterations always contain rice, although other starches substituted in the past. French scientist and writer C.C. Robin, in his Voyages Dans L’Interieur de La Louisiane, wrote of being served gumbo with corn meal mush around 1805.

In the early days of gumbo, it was thickened either by being cooked with okra or finished with filé powder (sometimes called gumbo filé). Filé is ground sassafras leaves, and the flavor is difficult to describe if you’ve never tasted sassafras before, except to say that it’s earthy and herbal. Okra is thought to have been introduced to the U.S. by enslaved Africans, while sassafras is a native plant, and filé among the preparations of the Choctaw tribe, among others.

One of the two, or both, lent their name to the dish. Some theorize that various West African languages (and now, Spanish and many Caribbean tongues) use the term guingombo to refer to okra; others note that the Choctaw phrase meaning sassafras is kombo ashish. Author and historian Shane K. Bernard makes a logical argument for the former, (and also notes a 1764 mention of something under the name gumbo).

In his Good Eats show on Gumbo, Alton Brown made a valid counter-point; the Choctaw’s use of file almost certainly predates the introduction of okra. Given the broad definition of gumbo, it’s hard to argue that Choctaw stews weren’t gumbo. 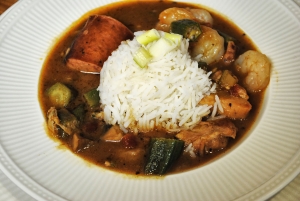 Modern gumbo, of course, is thickened substantially by roux; but how dark the roux should be isn’t something everyone can agree about, either. The darker the roux, the more flavor it has, but the less thickening power it has.

This brings us to a particular point of gumbo orthodoxy that we’ve violated here: using both filé and okra. But other than people saying “you can’t do that,” there’s no reason whatsoever not to do that. Alton Brown’s rationale was that this would make the gumbo too thick. I rather think that depends on how much you put in and how much you’re making, don’t you? If you prefer one or the other, you can adjust accordingly, but I find they’re equally delicious and merit inclusion.

Although gumbo is far older, some of the oldest recorded recipes for gumbo come from 1885’s La Cuisine Creole, published anonymously by traveler and writer Lafcadio Hearn. The recipes were prefaced by his general advice on “gombo” preparation:

To that I would only add the following: gumbo’s flexibility is meant to give you room for variety. When you go to the market not knowing what you’ll find, you’re well on your way to planning a fantastic gumbo. If the oysters are fresh and plump, get the oysters. If there’s a special on ham, get the ham. Heck, if you find yourself snout to snout with a swordfish, parry that summagun into a pot and get your filé ready.

I don’t know that making this recipe is going to make it easier to define gumbo if someone puts you on the spot, but I do know it’ll turn your “umm” into “mmm.”

Yesterdish’s Gumbo for a Crowd

*Filé powder–1 Tbsp. if you need thicker base

You can cook the base with the chicken and sausage; store it for up to two days.

On the day of service** warm it, add the freshly cut okra; cook 10 minutes and add the shrimp. Cook no more than 5 minutes. Serve with steamed rice.

** This is when you decide if you want to add the gumbo filé!

You can make 1/3; just reduce amounts by dividing in 3