You don’t need a giant jug to make great lemonade. 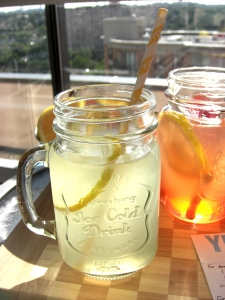 As each week gets closer to the end, I get progressively more obnoxious in asking people what they think I ought to put on Yesterdish. I’ll walk out into the newsroom at work and ask, “what about Szechuan chicken?” and wait for feedback from a group of people who don’t know what Yesterdish is, let alone that I’m proposing sharing a recipe for it.

The most common feedback I’ve gotten lately has been that everything I want to make is too warm. Pork wontons? Chicken ravioli? Calzones? (Hey, I like stuff wrapped in stuff, don’t judge.) Too warm, too warm, and too warm, given that temperatures have been in or flirting with the 90s.

But finally, I got some constructive feedback from Julie: “I think you should make pink lemonade.”

Lemonade is a simple drink and it ought to be simple to make on a weeknight.

I winced. Pink lemonade is a risky recipe for a site like Yesterdish, because if you poke around the history, you won’t like what you find; I’ve written about the history of pink lemonade, but here’s the short version. There are two potential histories. Both involve accidents at a circus in the 19th century. In one version, cinnamon candies fell into the lemonade; in the other, a performer’s worn red tights fell in.

On the the other hand, it does seem that pink lemonade is an American original, while lemonade itself has a much older history–records from the Jewish community in 12th century Egypt discuss the trade in qatarmizat, a lemon juice sweetened with honey enjoyed by the lower classes. But if I can’t restore the history of pink lemonade, at least I can try to redeem it. 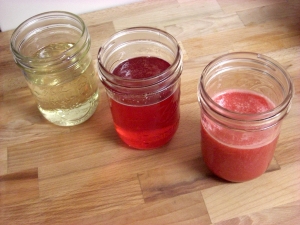 Sensing my hesitation, she adjusted the request. “Just make regular lemonade, then.”

“That’s… barely a recipe,” I complained. “Lemon, sugar, and water. What do I do with the rest of the card?”

“But people don’t know the proportions! And they don’t know how to make small amounts! Every recipe online is for a party,” she said.

Hmm. She did have a point about the recipes. Looking around I see lots of recipes for gallons of lemonade. A gallon? Arlington is primarily a city of young professionals who live alone. Even if you live with someone else, do you really want sixteen cups of lemonade for dinner?

And that’s really the core problem with lemonade recipes. Lemonade is a simple drink and it ought to be simple to make on a weeknight. Here’s our basic method for making the three most common kinds of lemonade: straight lemonade, strawberry lemonade, and, yes, even a pink lemonade, if you feel like you want to revisit the circus. No red tights required. (But totally an option, depending on your idea of a good time.) 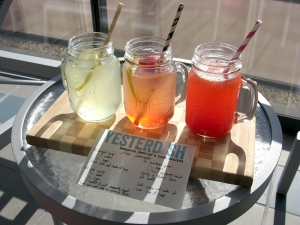 The first problem I faced was that red isn’t a flavor. Commercial lemonades might be colored with beet juice, cranberry juice, or red dye; most home recipes are colored with either raspberries or strawberries. I opted for strawberries for two reasons. One, in the “red tights” origin story, the vendor sold his tainted batch by barking that was “fine strawberry lemonade.” Two, strawberry lemonade is another variety of lemonade, but it differs from pink lemonade.

So in order to demonstrate the difference, and how to make small batches, I made the sweetening syrup for regular, pink, and strawberry lemonade; then I made a mix out of the lemon juice, water, and salt (we’ll get to that); and then made each glass individually by adding a quarter-cup of the appropriate syrup to 1-1/4 cups of the lemon mix.

For regular and pink lemonade, there’s a huge advantage to this process; the syrups will keep in your fridge for about a month. If you add a tablespoon of vodka to each jar of syrup, it’ll last a full three months, meaning you can have lemonade anytime you’re ready if you make one batch of syrup at the beginning of the summer. For the strawberry lemonade, unfortunately, you’re only going to get about three weeks out of it.

That’s because the strawberry lemonade isn’t cooked–it’s fresh mashed berries and sugar. Pink isn’t a flavor, but strawberry is, the best way to enjoy the fresh flavor of strawberries is to add fresh strawberries, not cooked ones.

Which brings us to the addition of salt. I realize you know this, but I’m going to remind you again: a little salt helps you appreciate the sweetness of food. It’s why you love salted caramel. It’s why you love chocolate-covered pretzels. It’s why you will love this lemonade. The salt also helps bring out the tartness of the lemon, keeping the mixture in balance.

The regular lemonade and pink lemonade taste approximately the same; there’s a little hint of strawberry when you take a sip, but it’s all in your nose. The strawberry lemonade, however, is correct to give the strawberries top billing; it’s a juicy strawberry rush with a crisp lemon finish.

Cook over medium heat till syrup.

Liquefy in blender. Strain out seeds.

Each recipe will make just over 1 cup of syrup.