A tuber associated with the holidays in a soup made for the Fall. 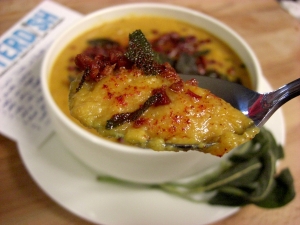 For some reason, sweet potatoes seem to be the most polarizing of the holiday season produce. While a few odd ducks reject pumpkin, for the most part, a pumpkin pie is a sine qua non of Thanksgiving celebrations. Suggest skipping the mashed potatoes and gravy and you’ll likely end up with someone throwing a casserole dish at you.

It is possible, of course, that your Thanksgiving dinner planning is more harmonious. Frankly, I have a hard time envisioning a Thanksgiving plan that doesn’t include a healthy serving of threats, ultimatums, and contracts with punitive liquidated damages clauses. (Your results may vary.)

This soup is all about the sweet potato, too often abandoned under a layer of marshmallow in a lonely corner of the dinner table, savory applications forgotten, without even the dignity of being called by its own name.

So how to avoid developing polarized pro- and anti-sweet potato camps in the family? Maybe the problem isn’t the potato–it’s the preparation. I’ll say two words: pork belly.

Do I have your attention? 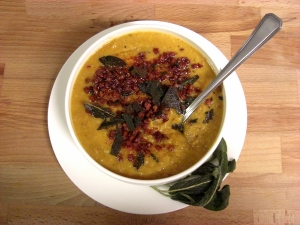 Pancetta, actually, the Italian salt-cured meat that’s like an unsmoked bacon with herbal overtones. The rich, flavorful rendered fat changes the flavor profile of the sweet potato from candy-starch to something that captures what’s best about pork chops and applesauce, or a sweet barbecue sauce on pulled pork.

To that base, we add leeks, celery, onions, garlic, and shallots, all of which could be added to a straightforward potato soup with great success–leeks in particular make appearances in potage Parmientier and vichyssoise. And then, to bridge those worlds, the soup is blended with a Madras curry powder with a bit of cayenne added to it, then lemon and butter to make a tart and rich finish.

Then, the crispy pancetta is added back and fried sage is added on top. (I do want to emphasize that the sage next to the bowl on the plate is, in fact, fried on the stem and is intended to be eaten. I don’t believe in putting things on the plate you weren’t meant to eat.)

If this doesn’t convince everyone that sweet potatoes have a right to be at the family table, you might try peer pressure and point out that the world has long recognized the sweet potato is delicious. 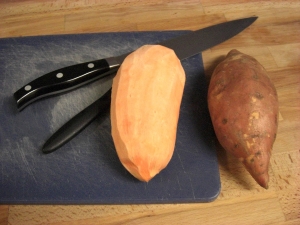 While we talked about the long road to acceptance for the standard potato in the post for baked potatoes from Avon Lake, Ohio, sweet potatoes didn’t have nearly as many problems reaching the table.

The sweet potato was a prized crop in Peru beyond the recorded history of its cultivation, which goes back to 750 B.C. Recent evidence suggests Polynesians crossed the Pacific sometime in the 11th century A.D. and brought the potatoes from the Andes to Asia.

By the time Columbus reached the West Indies in the late 15th century, the natives there called sweet potatoes batata, and the word returned with Columbus, where it took the form patata in Spanish and ultimately potato in English. Curiously, given that the regular potatoes Raleigh brought home were viewed as barely being fit to feed animals, the sweet potato was a prized crop.

Of course, thanks to our proximity, we were using it before it was a favorite of Louis XV. And after–a recipe for a sweet potato casserole appears in the first domestic cookbook, Amelia Simmons’ American Cookery–this page from the 1798 edition:

Argh. I had hoped to avoid this, but I suppose I should devote a little space to explaining the confusion with yams. It has to do with slavery and the various colors in which sweet potatoes can be found. 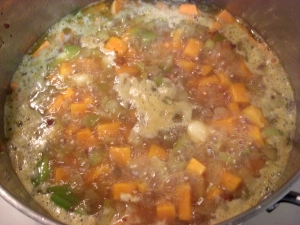 In the 18th century, enslaved people from Senegal living in the American South started to refer to the sweet potato as nyami, their name for a similarly starchy but botanically unrelated tuber, the yam. From that point, there was always a bit of confusion about the name of the white-fleshed, crumbly-textured sweet potatoes that were common.

In the 1950s, Louisiana farmers started to grow a different variety of sweet potato adopted from Puerto Rico, which had creamy orange flesh. As a marketing tactic (four words that almost always precede something outrageously obnoxious), the farmers called this orange variety yams. 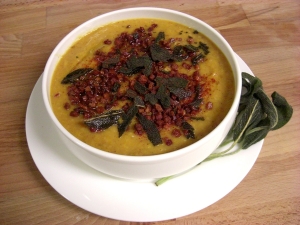 Meanwhile, actual yams, which are not members of the nightshade family at all, have dark skin and aren’t particularly sweet at all–at least, not any more sweet than a standard potato. If anything, the taste has hints of umami. Which makes a fine soup, but not this soup.

This soup is all about the sweet potato, too often abandoned under a layer of marshmallow in a lonely corner of the dinner table, savory applications forgotten, without even the dignity of being called by its own name.

But the sweet potato is so much more than that. It’s a bridge between worlds. Next time you’re at a barbecue place with sweet potato fries, ask to have the fries dusted with their dry rub and dip them in ranch dressing. It’s like the kettle corn of fries.

If the sweet potato can bring all of these flavors together, surely this soup can bring your family together. And if not, well, there’s always elaborate contractual relationships.