Did I ever tell you about my Aunt Esther and Uncle Dave? 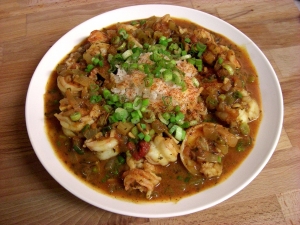 Great-Aunt and Great-Uncle, technically. When I was growing up they lived in the French Quarter in New Orleans. We lived up in Ohio, so we didn’t see them too much. But we saw them enough for my tastes, because until I was about 13, I didn’t appreciate Aunt Esther’s sense of humor.

As soon as she’d greeted my father, she’d turn to my mother (in front of my sister and me) and say, “How’s them kids? Still ugly?” And then turn to us with a wink.

We visited them the summer before I turned 13, and that was one of the biggest culinary turning points in my upbringing. I remember being woken up, jet-lagged beyond reason, to go get beignets before the sun would steam the wrinkles out of my suitcase-withered shirt. I remember finding it irrational, even impossible, that there was a sax player busking for change at that hour.

I remember the muffaletta and the po’ boy; going to Antoine’s and being fed elephant garlic and chicken while wearing a “borrowed” blazer (which is another story for another time); the first taste of crawfish fat; and that Tabasco was more of a lifestyle than a condiment. I remember being impressed that you could take things so seriously while being so casual about it. The world seemed a little sideways in New Orleans, and I’ve lived enough up and down since to know that sideways is preferable when you can have it.

The next time Uncle Dave and Aunt Esther came up north to visit, I shook Uncle Dave’s hand before anyone had a word out, and asked, “How’s that wife? Still old?”

“Casually serious” is a good motto for making Louisiana food in general, whether it’s Cajun, Creole, or otherwise. Etouffee itself is one of those dishes that’s got iterations in every culture in Louisiana. Impressive, for a recipe that’s only been around since the 1920s. 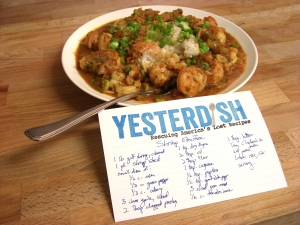 As the story goes, etouffee originated as a crawfish preparation by Mrs. Charles Hebert at the Hebert Hotel in Breaux Bridge, about ten miles Northeast of Lafayette. (Crawfish etouffee, a real one, is enriched with crawfish fat, so you just about can’t get it outside of Lousiana during crawfish season.)

Herbert called it crawfish court-bouillon; it supposedly got its current name from her friend Anna Guidry Champagne, who owned a restaurant and dance hall. A curious customer stuck his head in the kitchen and asked what she was doing, and Champagne replied, “J’etouffee les ecrevisse,” which translates to, “I’m smothering the crawfish.”

It works because all of those flavors, from the brine of the shrimp to the garlic and cayenne, are held together by the nutty warmth of the roux, in a texture just slightly creamier than melted butter.

So, let’s talk about some of the decisions I made in this recipe. A lot of recipes will start out with a butter-based roux. While you can technically do that for this dish, because the roux is only cooked to blonde (which is darker than blonde–see the pictures below), the traditional way to make roux in Louisiana is with vegetable oil. The milk solids in butter will burn if you cook the roux any darker than blonde. I add butter at the end for taste. 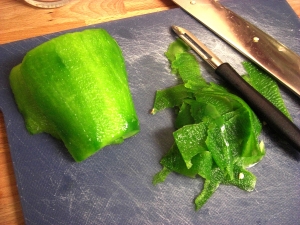 Also, as you can see in the picture to the left, I peel my green pepper. This is perhaps a little bit fussy and French of me, but the peels aren’t easily digested and I don’t like the texture.

Speaking of fussy and French, I clean the top and bottom vein from shrimp, and cut through the tail to remove where they connect. Especially these shrimp, which were wild-caught in the gulf. I don’t want to hear otherwise. It’s gross, and I’m not serving shrimp chitterlings to anyone. Ever.

A tip about roux: stir it constantly as it cooks. You won’t know what color the bottom is if you’re only seeing the foam on top. Also, when adding the vegetables, add the onion first and stir; you want to cool the roux down right away, and the onion will handle the heat better than the celery or the green pepper. As soon as the temperature comes down, add the others.

So there’s the agony of etouffee. Let’s talk a bit about the ecstasy.

Etouffee is an example of how something can be spicy without being hot like a pepper. When you take a bite, there are so many flavors competing for your attention, and you taste them all at once, in no particular order, and it works. It works because all of those flavors, from the brine of the shrimp to the garlic and cayenne, are held together by the nutty warmth of the roux, in a texture just slightly creamier than melted butter.

It’s comfort food. Perhaps too comforting, given the slightly massive plate I made for myself (this recipe serves two, and that was about a portion and a half). I’d like to think Aunt Esther would approve, even if she’s likely watching from above and asking, “How’s you? Still eating for two?”

*I ended up cooking mine about 50 minutes to get thickness I wanted.