Two of summer’s sweetest foods in one delicious dish. 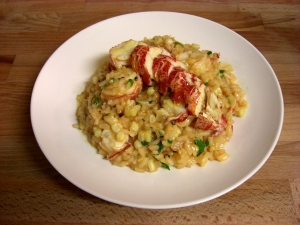 If you have fresh sweet corn, you can certainly eat it as-is. But if you’re feeling especially fancy, nothing pairs better with corn than lobster or butter. Or in this case, both.

And I’m especially fond of this, because it marries American, Italian, and French flavors. (Although, as we’ll discuss further down, not everyone is as thrilled with the idea.)

The richness of the risotto and the lobster pair with the crisp freshness of the corn and white wine; with tarragon and parsley, it represents all that’s best about the summer.

Historically speaking, rice came to Italy sometime in the 15th century, brought either by Arab occupiers themselves or by those who fled the Ottoman empire’s rule from Constantinople. But as in all things Italian, there’s an almost certainly baseless legend to justify culinary good sense.

In response, Valerius attended an event (his master’s wedding in the apprentice version of the legends) and threw saffron into the rice, thinking it would ruin it. Instead, it created risotto alla milanese. (Is it just me, or are fully ninety percent of culinary legends framed as accidents? Doesn’t anybody ever do anything intentional in Legend-land?)

Well, my recipe is intentional. July and August are perfect times to acquire both lobster and corn, when both are at their sweetest. The richness of the risotto and the lobster pair with the crisp freshness of the corn and white wine; with tarragon and parsley, it represents all that’s best about the summer.

Not necessarily summer in Italy, however. 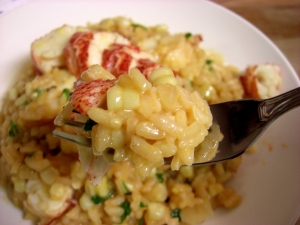 I explained my thoughts on this recipe to my mom over the phone, and at several points I heard her distinct diplomatic hesitation. Among the points she raised: corn isn’t generally eaten as a vegetable in Italy; she wouldn’t use thyme in the stock; and she wouldn’t use tarragon in the finished product.

For her, lobster risotto is about a celebration of the ocean, where there are no cornfields, and where the flavor should be as intensely briny and fresh as possible. Her lobster risotto, I would imagine, would taste intensely of lobster, with hints of garlic, parsley, and perhaps a drizzle of truffle oil to finish it.

I concede that my risotto is not traditional, not entirely Italian, and includes ingredients not often ocean-adjacent.

Really, this preparation is almost French. They grow corn near Bresse and eat it fresh at times, and the tarragon is particularly French. 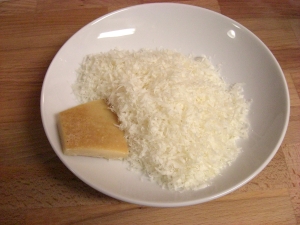 And who is at fault for that? Perhaps my mother, who sent me off to college with a copy of Jacques Pepin’s La Technique, forever adding a French influence to my cooking? J’accuse!

From a technique standpoint, this is indeed an Italian preparation. Poaching the lobster in a stock used to make the risotto is exactly how lobster risotto is made in Italy. And the risotto technique itself is still Italian: onion is sauteed in olive oil (or butter), the grains are coated in the oil and slightly toasted, and stock is added in intervals until it’s fully absorbed, and it’s then finished with cheese, herbs, and the poached lobster. The only non-Italian parts are the corn and the choice of herbs.

(Note further that the combination of Parmesan and lobster is also traditional in risotto. While ordinarily Italian cuisine doesn’t combine cheese and seafood, seafood risottos are the exception; even a scallop risotto will include Parmesan.)

As I’ve expressed before, the only authenticity I’m interested in personal authenticity. For me, that’s American ingredients, Italian technique, and French accents. For my mom, that’s the ocean. So I think she should show us her ocean lover’s lobster risotto. 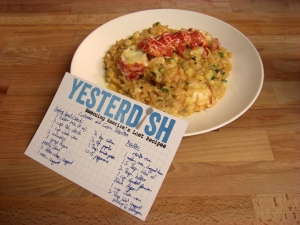 A few notes on preparation. In selecting lobster tail, the general rule is to look for cold-water tails, which should not have any yellow spots or a yellow band on the back. However, during July and August, when the warm-weather lobsters are molting, you don’t have to be quite as picky; the meat of both should be delicious. (Honestly, during the rest of the year, if the second-best option for lobster tails is your biggest problem, I wouldn’t turn my nose up at them.)

I finished my risotto with one of the sliced tails, which I then drizzled with a combination of clarified butter and truffle oil. If you don’t want to make fish stock, you could use a store-bought fish stock, clam juice, or even water in making the stock. But I’d shy away from using chicken stock here.

Sorry I didn’t take your advice on this one, mom. This isn’t a Yesterdemocracy, it’s a Yesterdishtatorship. But I am a benevolent ruler and invite you to respond with your version.

Besides, at least I don’t serve risotto with pasta…