It’s a simple thing, but versatile enough to merit its own discussion. 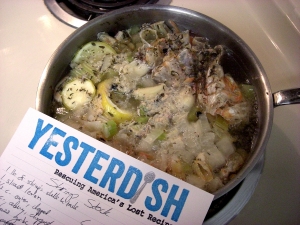 I needed shrimp stock for my etouffee, but the same stock could be used to make a thai soup with dumplings, or a bisque, or mixed with cream to make grits, or reduced and mixed with butter and lemon to make a sauce for poached seafood or pasta, or turned into a risotto, or anything as wild as your imagination can produce. (Off the top of my head, what about melting gelatin sheets into it and making a shrimp aspic to pour over a shrimp terrine?)

Like any other stock, you can freeze until you need it; some people freeze their stock in cubes, but frankly, shrimp stock isn’t the sort of thing I use in tablespoon amounts. Either I want something to taste like shrimp or I don’t.

What makes this a valuable technique is that it’s using something in your kitchen that you almost certainly were going to throw away. Unless you’re inclined to dehydrate them, grind them, and turn them into the basis for shrimp chips, there isn’t a great deal you can do with shrimp shells at home except turn them into a stock. And unless you’re having salt and pepper shrimp, or some kind of a boil, there’s no particular reason to leave the shells attached.

Shrimp stock is easier than chicken stock, in that you add everything at once and it only cooks for an hour. (Hypothetically you could do it in half that time, but I’ve had better results after about an hour.) And if you’re making a recipe like shrimp etouffee, you’ve got the time anyway, because you’ve got a bit of mise en place ahead of you.

Cover with eight cups of water. Bring to boil; lower heat and simmer for one hour. Strain; reduce to 3-4 cups.