How an etouffee got this name, and a Gulf shrimp primer. 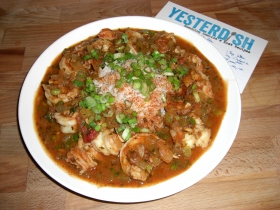 If you compare this recipe to Yesterdish’s shrimp etouffee (pictured at left), you won’t find many differences–in fact, I’d argue you wouldn’t find any substantive differences. So why do you sometimes find this called a bisque?

The classic French bisque is a soup made from crustaceans, typically lobster or crab, where the shells are cooked and turned into a stock, then some of the meat is blended with the aromatics to produce a thick base. (Typically these are the pieces that would be too small to meaningfully present.) Usually, in American preparations, we don’t blend the meat back in. But then there’s this sort of a recipe. It really stems from the casual Louisiana tradition of serving etouffee that didn’t reduce long enough as a bisque, because “runny etouffee” doesn’t sound nearly as appetizing.

But having done that, the result is we find cards for “shrimp bisque” that aren’t soups at all.

All of that said, let’s look at some shrimp. This box is from North Carolina, and believe it or not, the species of shrimp you catch in the Southeast on the Atlantic coast, even as far north as Maryland, are all collectively called “Gulf shrimp,” even though the three species aren’t quite the same and you’re not really anywhere near the Gulf.

Note: If using peeled and cook shrimp add just before serving and heat through for about 2 minutes only.