A widely, if rarely, practiced technique. 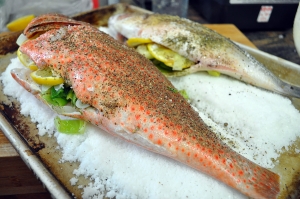 There isn’t much you can’t cook by covering it with a salt and egg white paste and baking it. It’s used with chicken in China, duck in Europe, and lamb in the Middle East, for example. (Where it started is tough to say, but we’ll get to that in a minute.) And all make for a dramatic presentation.

With the bigger proteins and charcoal or wood fires, the mechanics are a little different, admittedly. The temperatures involved can be high enough to turn the salt pack into some sort of a form-fitting clay-like oven. For fish, however, high heat isn’t necessary, and the salt helps the fish to cook slowly and evenly while keeping moisture in. It’s more like a rock salt sous vide than anything.

We served ours (a red snapper and a black bass) with a beurre blanc. And to get into the controversial bit right away… we didn’t scale the fish before putting the crust on.

A salt crust does more than a paper wrapper, fusing flavors with greater intensity than folding can achieve.

It’s true, there are almost no culinary applications where scaling the fish is truly optional. But this is one of the exceptions.

If you look at the justifications offered for why fish must be scaled, most of them are pretty sound. The scales are inedible, semi-obviously, and would do harm to your mouth if you missed one. You can sometimes grill a scales-on fish, in theory, but burning the scales doesn’t exactly improve the flavor of the overall product. 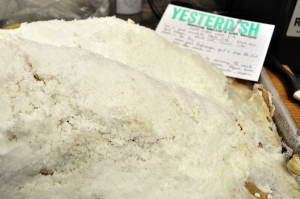 (Lots of places talk about the potential for bacteria under the scales, but if you’re cooking the fish to temperature before eating it, I’m not sure what your point is–and if you’re making raw fish with scales on it as a meal, you have problems I am not prepared to address in this format.)

But when you’re talking about a salt crust, there are a number of factors that combine to make it a viable option. The fish steams from the inside, which loosens the skin. At the same time, the skin shrinks somewhat, locking the scales together. And the scales don’t scorch because they’re protected by the salt.

The end result is that, with a cut on either side, the skin from head to tail can be lifted off in one piece, like you’re removing a door panel from a car–a method that leaves the scales and skin intact, arguably making it less likely that you’ll miss one. And since the fish has to be filleted anyway into serving portions, it’s not as if you’re asking diners to play CSI: Atlantis.

Although, now that I’ve said that, I feel like I owe you a joke. Okay, gimmie a sec.

Speaking personally, I’m of a finicky nature scaling because I have a supernatural power of finding random bones in anything I eat, especially fish. If a soft-shell crab ever grows a femur, I guarantee you that we’ll discover it when I eat a crab cake. So my personal preference would be to get a scaled fish, but the family recipe is to do otherwise.

As for the origin of the recipe, your guess is as good as anyone’s. This is unfortunately one of those times where I raise more questions with what we think we know than I can answer.

Over at Silk Road Gourmet, the cite the earliest reference as being from the 4th century B.C., in Archestratus’ The Life of Luxury, a poem parodying earlier serious works with culinary advice given a great deal of gravitas. Archestratus was Greek but living in Sicily, and that puts him at a nexus of the right techniques and ingredients for making that dish.

Here’s the thing: the fragments of the work that still exist were the ones quoted hundreds of years later by Athenaeus, a Greek writing sometime around the early 3rd century A.D. I haven’t found the originals, but the translations sometimes use the word brine instead of salt. 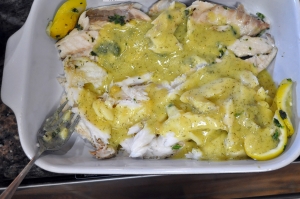 We need to find the original Greek to sort this out, and I haven’t found it yet. I’m semi-speculating that the original word is allec, the paste-like sediment from making garum, the fermented fish condiment beloved by the ancient Greeks and Romans. It’s also possible that it was muria, liquid drained off from salted fish. Either way, there’s no English translation of those concepts, and 19th-century translators would’ve leaned more toward a familiar word that misses the mark than an unfamiliar word, particularly in quoting a fragment of a poem.

None of that limits the ability to appreciate this dish in the present, or at any point in American history, for that matter. In the 1950s, you’d occasionally find recipes like this one from the May 12, 1957 edition of the Racine (Wisconsin) Sunday Bulletin:

So why don’t you see more salt crust preparations? Mostly, it’s a massive waste of salt, which until recent history was an expensive ingredient to devote to a more intense iteration of en papillote, meaning cooked in parchment. Its historical applications were mostly to show off how rich you were. But that said, a salt crust does more than a paper wrapper, fusing flavors with greater intensity than folding can achieve.

So that said, my personal preference on the recipe below is to get the fish scaled anyway. If, like me, you’re from the midwest and you think it’s madness that anyone would want to live near the ocean, you’d probably prefer the scaled version. If you’re more like the brine-soaked side of my family that never met an ocean it didn’t prefer to a farm, you should absolutely try the scales-on version.

Have your fishmonger gut and prep the fish butleave the scales on. [Note: Or ask to have them taken off, if you’re finicky like me.]

Prepare your fish by seasoning the cavity with aromatics like dill, rosemary, thyme, lemon, bay leaves, shallots, ginger, garlic, pepper. Not all–choose 2 or 3.

Depending on the size of the fish you need to prepare your salt.

Generally, 1 lb. of fish will require:

2 lbs. of fish will require:

Cover the fish that you have seasoned after you place it on a salt bed on a cookie sheet. You want 1/4 inch of salt crust all over–instant probe–set thermometer at 135-140 and place in preheated 400 deg. oven until done.

Rest for 10 minutes before cracking crust and serve.