“What am I, chopped liver?” 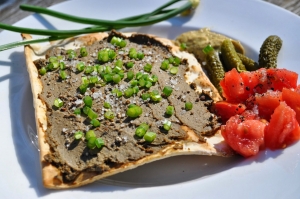 Actually, I’m quite a bit like chopped liver. I’m an acquired taste, you’re more likely to find me in a deli than you are in a sit-down restaurant, and most of the people who say they don’t like me haven’t even met me.

Part of chopped liver’s public relations problem is the word “liver.” It evokes memories of poorly-prepared beef liver, which, if not treated just so, ends up tasting metallic and with an off-putting sort of crunch. But chicken livers are another animal entirely, literally and figuratively.

When cut up and mixed with a little enriching fat (traditionally, rendered chicken fat, or schmaltz), chopped chicken liver is an indulgence with a flavor that has much of the charm of its liver-based cousins, pâté de foie gras and liverwurst.

The actual flavor of chopped liver has more in common with a honey-glazed ham than it does chicken meat or beef liver.

The key to understanding chopped liver–and the reason why it’s an acquired taste–is that chicken livers have an enormously complex flavor, one that doesn’t align with preconceived notions.

(To be fair, there are endless methods and theories about how to assemble a chopped liver, so your results may vary. This version is inspired by the kind you’d get in a Jewish deli in the Northeast.) 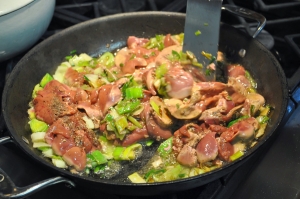 Think of it this way: if you took a bite of a steak and it tasted like a delicious chocolate mousse, you’d probably be disgusted. Not because you don’t like the flavor–just because your mouth expected one thing and got another.

People look at chopped chicken liver and expect it to taste something like chicken or liver or both. The actual taste has much more going on: sweetness, acidity, herbs, umami, a hint of heat from the black pepper, and the flavor of whatever enriching fat you use.

About that fat–the traditional fat to use is schmaltz because most interpretations of the rules for keeping kosher prevent mixing milk products and meat, and butter is a milk product. At the same time, because butter tastes amazing, many liver recipes call for this. I don’t care in the slightest about kosher-ness, but we use duck fat, because it tastes even better than butter, in my view. But use butter, if you prefer.

If you’ll forgive the non-Kosher analogy, the actual flavor of chopped liver has more in common with a honey-glazed ham than it does chicken meat or beef liver.

Key to that flavor profile is the sweetness, which is created by the caramelization of the onions (or leeks, in this case) and the livers. At the same time, you don’t want the livers to be overcooked–a cooked liver should, ideally, be opaque pink in the center.

Additional notes of sweet and acid are added by the red wine, which then enhances the caramelization when it reduces. 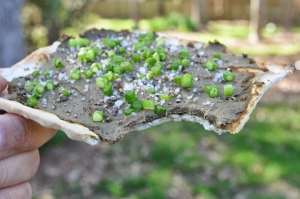 There are a couple more ingredients that need a bit of explanation or clarification. First is the Italian condiment gremolata, which, somehow, we haven’t talked about yet. It’s just garlic, parsley, and lemon zest, chopped together. Normally I use just the garlic and parsley, which is what the French call persillade, but here, the lemon zest adds a nice bit of complexity. (We’ll talk more about gremolata another time, probably in the context of veal.)

The other is herbes de Provence. This traditionally just means a mixture of herbs they might use in France, but in this case, I’m actually talking about the dry mixtures on the shelves, especially because they include an ingredient you wouldn’t typically find in French iterations: lavender. Like marjoram, lavender helps enhance sweet and herbal notes in savory dishes, sort of mirroring how rosemary and basil can enhance the savory elements of sweet dishes.

Chopped liver is both a German and Ashkenazi Jewish food. In Germany, liverwurst would frequently be made with pig’s liver, and even veal-based versions might well be enriched with butter, so chopped liver enriched with schmaltz became a Jewish specialty. When those Jews came to the United States in the late 19th century to avoid anti-Semitic laws, they brought chopped liver along.

Once here, however, the German Jewish community emphasized the importance of assimilation. Here’s an “assimilated” (which is to say, non-kosher) version from the May 8, 1912 edition of the Reynolds (Indiana) Journal:

If you aren’t sold on attempting chopped liver, yet, consider that, if you don’t like it, you’re not out a great deal of money. Even here in the D.C. area, you can get two pounds of chicken livers for about three dollars.

So consider attempting chopped liver. If you taste it with an open mind, divorced from your expectations, you might discover you enjoy it.