A dish that could convert anyone into a tofu lover. 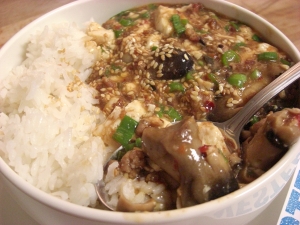 I was nearly 30 before I really understood tofu. I would eat it from time to time, but generally with little enthusiasm. In the 1980s and 1990s, the general explanation of tofu in the midwest was a meat substitute, an impression reinforced by its presence on menus only as an optional protein in salads.

Actually, it was Japanese culture that made me reconsider tofu: Iron Chef.

While there were lots of Chinese dishes prepared on Iron Chef, none of them evoked the response in guest judges like the pork and tofu combination of mapo dofu. “Ahhh, mapo dofu,” they’d say, sighing slightly, bodies easing further into their seats, as if remembering a full-body massage. Something about this dish triggered an emotional response. Clearly, their tofu was different than the grilled tofu blocks I got elsewhere. 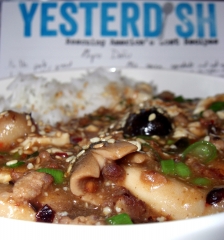 And it is very different. Speaking broadly, Chinese cooking views the texture of food as being as important as the flavor of food. While Western cooking does this in places (we all enjoy crisp fries and juicy pulled pork), for the most part, we view flavor as the ultimate goal and texture slightly behind it. There’s a wide range of acceptable textures for, say, pizza or Buffalo wings.

This is less true in Chinese cuisines, which is part of the reason why tofu comes in many textures. For this, you want the silken tofu–and you want your cubes to be comparatively large, because they’ll break up a bit from stirring. Shoot for about an inch on each side.

As much as mapo dofu is a study in flavor, it’s a study in texture. Soft tofu, mushrooms that yield to a tooth, and a hot sauce suspending pieces of fried pork, chile pepper, and green onion. It numbs, and warms, and comforts, causing the same kind of euphoria you might feel after a good curry. 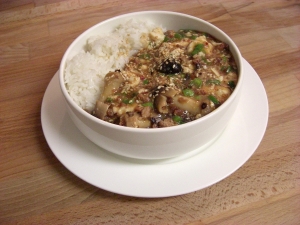 The peppercorns have a distinctive numbing taste–but that said, mapo dofu is just as delicious without them. Just different. After all, that’s how we made it in this country for decades.

The broader lesson of mapo dofu is to use ingredients for what they are, rather than for what you want them to be. Tofu isn’t meat and if you approach it as meat, you’ll always be disappointed in it. But it is an exceptional texture that can change your experience of the flavors imparted to it.

And now, in honor of mapo dofu, the extended version of The Beets, “Killer Tofu!”

Mix sauce ingredients and set aside.

In a wok or skillet, over medium heat, cook pork and chopped peppers together. When cooked, add mushrooms and cook two minutes.

Add sauce and tofu; cook to thicken. Stir in green onions when ready to serve. Serve with white rice.