One of the first recipes I learned how to make. 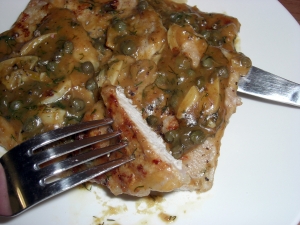 All of these versions worked, however, because the essential elements of lemon, capers, and pork worked just as effectively.

There is something of home in this dish, which itself is delicious like a lemon–that is to say, delicious when taken in balance. 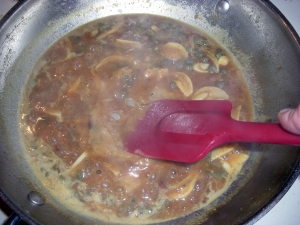 In this current iteration, I’ve come to prefer a beurre manié to thicken the sauce. A beurre manié (“kneaded butter”) is essentially a cold roux; flour and butter are worked together with your fingers, then added to a hot liquid. The advantage is that you can deglaze the pan sooner than you could with a roux, which avoids overcooking any of the fond that has stuck to the pan. While a slurry would also let you deglaze sooner, I prefer the texture the butter adds.

The number of times you dredge, and what goes into the dredge, is a matter of taste. But the cornstarch is important; the smaller grains help coat the pork more evenly. 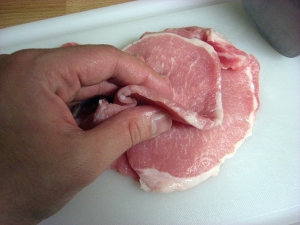 This recipe can work with medallions cut from a tenderloin, boneless loin chops, or even veal or chicken. Essentially it’s what we used to call a paillard, meaning a pounded-flat piece of meat; France has since moved on to calling them escalopes and the U.S. generally calls them medallions where pork is concerned and scallops where chicken or veal are used. (This is for no other reason than that medallion sounds fancier than scallop, but they can’t call chicken or veal pieces medallions, because they aren’t round.)

Also, paillard now means something akin to bawdy in French. Well, really, it means something like someone who gets pounded till they’re flat, just not quite as literally as it used to.

There is something of home in this dish, which itself is delicious like a lemon–that is to say, delicious when taken in balance. Usually I serve this with basmati rice and steamed asparagus. Just remember to peel your asparagus (and remember that skinny asparagus is not necessarily young; asparagus doesn’t get thicker as it gets older).

For Beurre Manié:
1 Tbsp. each, butter and flour