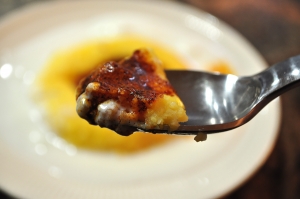 Also transliterated as from Tigrinya as gaat or ghaat, and known as genfo in Amharic, ga’at is a firm porridge that’s formed into a volcano-like shape, with a well of spicy butter sauce in the middle and a yogurt mixture poured around the sides. The hot butter smokes and bubbles.

(Not that I managed to do a great job capturing that, partially because I may have alienated any helpers by insisting that they don’t really know how to take Yesterdish photos. Ahem. Love you guys. Next time, maybe you can lend a hand?)

Ga’at is traditionally served to pregnant women because it’s easy to digest, it’s made of things they have on hand at all times, and it’s a nutrient-rich food source you don’t have to kill a goat to enjoy.

Yes, a goat. Hey, this is what my mother said, so this is what I’m telling you. I asked: “Can we kill the goat anyway?” She assured me that’s an option. I think she just meant that it’s food you don’t need to work hard to acquire.

Ga’at is exactly as dramatic as you want your food to be: just enough to make you excited to eat and not so much that you need safety goggles.

While some regions make it with barley flour, in Asmara, it’s typically made with a course-ground cornmeal, most likely from the Italian influence. There’s even a traditional method of serving polenta in the south of Italy that sort of resembles ga’at visually.

But that doesn’t really tell us which came first. While it’s true that corn comes from the New World, it’s also true that polenta was a dish known to the ancient Romans. At the time, they would make it with chickpeas or chestnut flour. So the Habesha had their barley and the Romans had their chickpeas, and at some point, both made room for cornmeal.

While it looks like something you could throw together in a minute, that’s only true if you have some ingredients specific to the Horn of Africa. We’ll discuss those in a moment.

One thing you don’t have to use from either Eritrea or Italy is the method of cooking the polenta–you can do it in the microwave. I know, I know. You’ve probably been told you can’t make polenta that way. Italian cooking has these peculiar areas of orthodoxy that don’t make any scientific sense. No, I take it back. It’s not even orthodoxy–it’s fetishization.

“Oh, no,” they say. “You have to make the polenta in a copper pot, and stir for 45 minutes.” There is no basis in reality for that assertion.

These are the same people who insisted you had to boil pasta in a big pot with lots of water. Why? Did you buy claustrophobic capellini? Did you get the recipe from Aquaman? Are you getting a kickback from the water company?

By the 1980s, they came up with a pseudo-scientific explanation: because if you use too little water, the pasta will re-absorb the starch. While there are lots of reasons that this is silly, the big one is that dry pasta itself is just over 70% starch. When it’s cooked, it’s a little over 20% starch. If the pasta has more starch in it than the surrounding water, it’s not going to re-absorb anything. Is your water 20% starch? No, no it is not.

Anyway, back to ga’at. You want to find a coarse-ground cornmeal for this, the coarser the better. Traditionally this would be served with a thick, homemade yogurt; we use greek yogurt or sour cream, then pour some buttermilk with it, to emulate the chunky texture and sourness. Your other ingredients may need a little more explanation.

Berbere is the ubiquitous spice blend of Ethiopian and Eritrean cooking, the element that, if removed, would render both cuisines utterly unrecognizable. It’s a mixture of different types of heat and spice: the burn of dried chilies, the bite of ginger, the warmth of nutmeg, and if you can find it, the slight menthol undertone of korarima.

I’ve tried to avoid this topic because I wanted to make a recipe post with our specific blend. But I can’t, because I haven’t talked my mother into giving me that recipe yet.

That’s really not an issue with her–the secrecy of berbere recipes is more of a cultural thing. Asking to post a ga’at recipe is different than asking to post a berbere recipe for the same reason that someone might let you post a picture of him in his swim trunks but object to a picture in his underwear. That it’s the same degree of exposure isn’t really the point.

Not that I could re-create it exactly even if she shared it. As Marcus Samuelsson has said: [l]ike wine, berbere has terroir, a taste of the unique earth that the chilies came from. Whether the chilies are grown next to a coffee plant or by the side of the road a there is a special quality that defines each one.

True fact. My mother talks about her grandmother’s berbere having a French overtone because her chiles grew next to a lavender plant and a lemon tree. “No berbere was right until I added those two things,” she said. “Then it was right, by my nose.”

So duplicating a berbere from a recipe without knowing and having access to the origin of the chiles involved is about as useful as a recipe for a coffee drink that doesn’t specify which coffee beans to use. You’ll get something like the original, but it won’t quite be the original. But that said, if you want to make your own berbere, here’s a version to try.

Here’s a version to get started.

We have such a big Habesha community in the DC area that I’m actually spoiled for choice when it comes to buying berbere locally. Your results may be better online, or if you’re really unable to pick any up, send me a message or leave a comment and I’ll see if I can’t help. 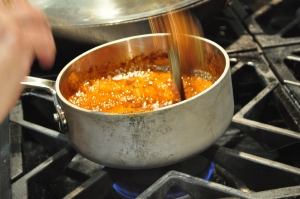 Next, this recipe calls for tesmi, also known as niter kibbeh in Amharic. It’s a clarified butter that’s cooked with spices and then strained; the turmeric and ginger give it a sweet and mild flavor.

Now here’s the thing. There are lots of recipes for which the butter absolutely must be clarified; ga’at is not one of them. So if you’re really not in the mood to make tesmi, you could just melt butter and add ginger, turmeric, fenugreek and black pepper. You have to be a lot more careful about scorching, but it’d do the trick.

We actually used a mixture of both tesmi and fresh butter, which raised the smoke point of the butter somewhat, but didn’t let us get it really hot–which is part of the reason why you don’t see smoking in these pictures (steaming, really–the steam from the cornmeal when the hot, hot fat hits it). I was mostly just capturing this as we were making it for dinner, so suggesting we delay dinner half an hour so I can get a picture of smoking tesmi to complete my volcano did not strike me as a great idea.

On the other hand, if you want to make tesmi so your volcano smokes properly, well, here’s a recipe.

Here’s a version to get started.

Heat all ingredients in a saucepan over low heat. Skim off any foam that rises to the top. When there isn’t any more foam, the butter should be clear with milk solids and spices at the bottom.

Remove from heat and let cool. Through a strainer, carefully pour off just the clear butter, leaving the solids and spices at the bottom of the saucepan.

There’s one more thing I want to mention in support of your trying ga’at: it’ll make you taste cornmeal as if it’s the first time, again. 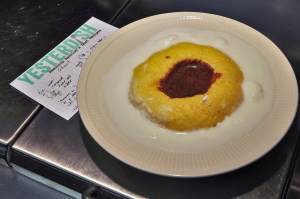 This is the purpose of a lot of the goofy molecular gastronomy with popsicles and gels. It’s not that the optimal way to try a BLT is freeze-dried in a martini glass–it’s that, when you take these familiar elements out of their normal packages and preserve the flavors in a new form, you interact differently with that food. Bacon tastes even better when it’s a surprise.

But the shortcoming is that so many of these preparations require directions to navigate them into your mouth, and that part, I don’t like. In a world of soup-filled pipettes, Ga’at is exactly as dramatic as you want your food to be: just enough to make you excited to eat and not so much that you need safety goggles.

Microwave in 7 minute intervals for a total of 21 minutes or until liquid is absorbed.

Pour around edges a 50/50 mixture (leave some texture) of:

Heat and fill volcano with: