A Christmas present to unwrap at the table. 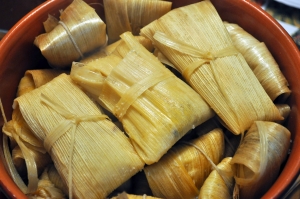 Tamales are a Christmastime tradition in Mexico and in the Latino community here in the U.S., where friends and families will gather together in a tamalada, a tamal-making party.

(By the way, I’ll likely use both tamal and tamale to refer to these items in the singular. While tamal is technically correct and the word tamale emerged because English doesn’t pluralize the same way Spanish does, I’ve heard tamale for too many years for it to sound strange to me.)

A tamalada is a lot like a cookie-decorating party; it distributes a labor-intensive job among a group of friends and family in a way that makes it seem like it’s not work at all. Children learn the family traditions and secret recipes while aunts and uncles comment on how big they’re getting. It’s also an exceptionally old tradition.

We talked about the Aztecs and the process of making nixtamalized corn in the recipe for tortillas from Ceres, California. If you need a refresher on nixtamalization, read that, first; if not, let’s move on. The Aztecs were making various types of tamales at least as far back as 5,000 B.C., which was when they started cultivating corn. 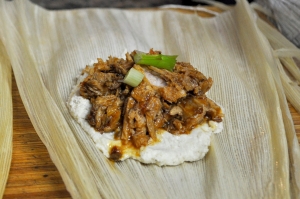 While nixtamalization made the corn easier to eat and more nutritious–which is important for a culture that relies on its warriors for survival–warriors couldn’t very well just stop in the jungle and start the elaborate process of making nixtamal (the Aztec word for the processed corn, which, semi-obviously, the process was named after).

Instead, the nixtamal would be wrapped in a corn husk (or banana leaf or avocado leaf), tied shut, and then could be heated in the coals of the fire or eaten on the go. From that basic framework, the Aztecs produced a diversity of tamales. By using a variety of meats, vegetables, fruits, and nuts, tamales could be energy bars, protein bars, or even granola bars of a sort, depending on what the maker thought was required at a given time. 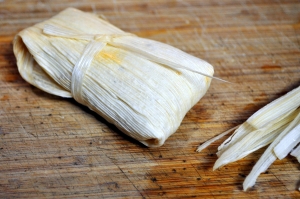 In Mexico, that diversity still exists. In Veracruz, tamales are made with pork, fresh corn, and an aromatic called hoja santa, or sacred leaf,which tastes sort of like a mixture of tarragon and nutmeg. In Sinaloa, there’s a variety with sweet beans and pineapple. And in Michoacan, they make an iteration called corundas, which are unfilled nixtamal wrapped in green corn leaves to make a triangular shape that resembles onigiri, Japanese rice balls.

Actually, the similarities are uncanny. While the origin of onigiri is probably sometime before the 8th century A.D.–the point where chopsticks started becoming widespread, so it wasn’t as essential that rice be rolled into shapes to eat it–it was about nine centuries later when the rice balls became portable food for the samurai, wrapped in dried bamboo leaves, which are about the color of horn husks, but longer. If time allowed, they could be cooked on the fire, making yaki (grilled) onigiri. Sound familiar?

But back to tamales. What we’re more familiar with here, of course, emerged in the mid-to-late 19th century on the West Coast. An early domestic mention of tamales was included in the November 3, 1883 edition of the Boston Globe (in a story originating in the San Francisco Post):

A couple of notes about the recipe. You should be able to find masa harina flour in most grocery stores, and you can probably get fresh masa from a specialty shop, there’s an alternative recipe included that tries to approximate the texture without using nixtamalized corn. Consider that a last resort, but it’s still better than no tamales at all, I think. 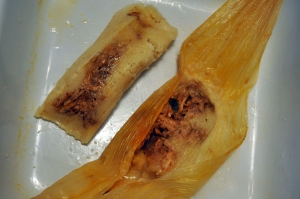 These are only suggested fillings. If a diversity of fillings was good enough for the Aztecs, then it’s good enough for me. And you should consider following in the footsteps of the Aztecs and inviting the family over to make these with you, even if you don’t know what you’re doing. When you look back the dinner you made for Christmas, nobody will remember whether you had the prettiest tamales. They’ll just remember the stories and the laughter.

*Read the whole recipe to stage it. Mise en place!

For the dough, either use a maseca mix (follow its directions) or:

Mix everything in a bowl until the dough looks like mashed potatoes–cover until needed.

The filling (somewhat unconventional, but delicious).

Put the Boston butt in an 8-quart saucepan. Cover with water and add everything listed. Cook until fork tender (2-1/2 hours or so).

While the Boston butt is cooking, soak your corn husks in hot water. This should take no less than 1 hour and up to 2 hours. They need to be pliable.

On a dry corn husk (after soaking you need to dry them)–lay 5/6 corn husks. Put 2 Tbsp. of the dough; spread lengthwise 1 Tbsp. of the meat and now fold by rolling the husk so the dough surrounds the meat. Then fold the ends under; tie them up.

Now you cook them.

Stand the tied tamales on their folded end, tightly packed together. Add enough stock/water to come 1″ below the top of the tamales–cover. Cook for 12 minutes to boil, then turn to simmer, lid off, for 1-1/2 hours.

Serve dry, or wet with the meat liquid you reserved. Feliz Navidad!