The fried history of an export we re-imported. 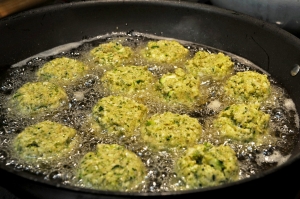 If you watch a lot of cooking shows, there’s a word that keeps recurring in modern culinary discourse: elevate. It’s thrown around casually, as in, “I made a chicken sandwich, but I made an elevated chicken sandwich.”

The caveat is that a recipe can still provide the palate a context and counterpoint for the flavors and textures of ingredients that can elevate their positive aspects. The apple pie may never be better than its apples, but the right mixture of sugar, salt and spices can help you appreciate the apple more than you would its raw state.

This, my friends, is elevated zucchini.

The patties are impossibly light, with a crisp exterior and a rich interior; the flesh of the zucchini is firm but tender, almost like an artichoke heart.

Fried zucchini is an international favorite–the Greeks have kolokithokeftedes, a fried zucchini tapa; the Spanish have their own tapa, zarangollo, made from zucchini and onions that are fried or sauteed together, then mixed with egg; and the Italians fry both the blossoms (often stuffed with cheese) and the flesh into fritters substantially like these. 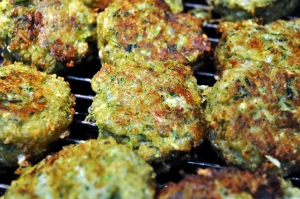 Have you ever thought it odd that zucchini has an Italian name when we’re all told that squash is native to the Americas? It’s a little odd, when you think about it, that the most common kinds of summer squash we encounter are crookneck, straight-neck, patty pan, and zucchini. It’s like being introduced to four brothers named Matthew, Mark, Luke, and Fabrizio.

The name zucchini is derived from the Italian word zucca, which means squash, and the suffix -ini, one of the various Italian suffixes meaning little. The name is a clue as to how you should pick a zucchini, if you have the choice. The smaller a zucchini is, the more tender, fleshy, and sweet it is; as the zucchini grows larger, it becomes watery and bland.

There aren’t particularly old recipes for zucchini, however, because the hybrid summer squash named zucchini didn’t exist until the late 19th century. Summer squash varieties (like the crookneck squash or pattypan squash) are native to North America; seeds have been found in dig sites that date to at least 4,000 B.C. While Roman cookbooks include descriptions of winter squash, it’s likely that summer squash was something Columbus brought to Europe. 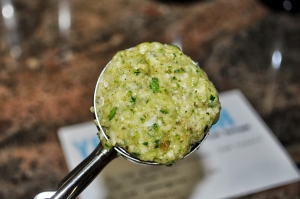 One interesting wrinkle is that the word squash itself was a corruption of the Narragansett Native American word for the plant, askutasquash, which meant “eaten green or raw.” While many Native Americans did eat the squash raw, they were also enjoyed roasted or mashed, and colonists adopted the cooked versions. And the method we use to make zucchini patties existed in the 19th century, used to make fritters out of leftover mashed summer squash.

For example, consider the following pre-zucchini recipes for squash from the September 13, 1877 edition of the Monroeville (Indiana) Democrat:

Given our national love of all things fried, it probably comes as no surprise that the fritters were popular. Here’s a recipe from the August 23, 1900 edition of the Acton Concord (Massachusetts) Enterprise that does away with the pretense of mashed squash as the intended result:

Over the decades, as we became more comfortable with zucchini, it started to take the place of the other squash varieties in our fried preparations. Here’s a version from the August 10, 1967 edition of the Muscatine (Iowa) Journal:

Notice that the recipes above call for boiling or steaming the squash, while the recipe we use requires salting the squash. That has to do with a better understanding of the mechanics of plant cell structures than our culinary predecessors had.

When you have a raw piece of squash, much of the water is contained in cells. The heat of cooking damages the cells; that means water leaking into our hot oil, which means splattering, and water in our zucchini patties–which means a soggy patty. We need to remove water from those cell-balloons before we fry them. 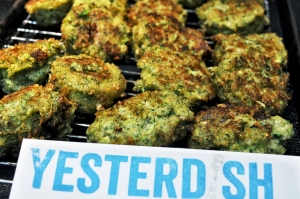 So we have a few options. We could cook the zucchini in advance; that would burst the cells, which would let us squeeze out the water and have a crisp patty. That’s how steaming and boiling works.

A second, similar, option would be to freeze, then thaw the zucchini, which would have about the same effect as blanching, rupturing cells and emptying water.

But another way is to salt the zucchini. Our old friend osmosis will kick in–negative water ions will be drawn to the positive salt ions, passing through the cell walls. (Click for a digression on salting vegetables and osmosis, if you care.)

The result of the process is an achievement that’s almost too good to describe as vegetable-based. The patties are impossibly light, with a crisp exterior and a rich interior; the flesh of the zucchini is firm but tender, almost like an artichoke heart. The flavor profile is unrepentantly Italian, the Parmesan and oregano taking on a range of flavors depending on whether they’re in the crust or the patty itself.

A note from my Julie who makes these with tzatziki, Greek style–she says: “I think you should substitute parsley for the thyme. If you look at the ingredients, parsley is a much better fit.” (I’m sure it’s fantastic either way.) She also says you can substitute chickpea flour if you want a gluten-free version, but that the batter was a bit dryer and she used two eggs.

Some recipes reward only seasoned palates; some are for everyone. This is a recipe for everyone. It’s a rare thing, to watch children fight over the last of the zucchini, but I assure you, that will happen if you make these.