The poor but honest cousin of a nouveau rich dish. 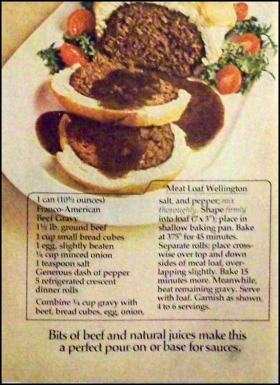 Beef Wellington as we’ve come to know it is a center cut of beef tenderloin (or filets mignon cut from the tenderloin, if these are individually portioned Wellingtons), surrounded with pâté de foie gras and mushroom duxelles, wrapped in puff pastry.

On that basic theme, we’ve seen endless variations. Some use less temperamental coatings, like a brioche dough or a pie crust dough; some use seared slices of foie gras instead of the pâté; many line the pastry with something to keep it crisp despite having moist ingredients inside (Julia Child used prosciutto). The result is typically served with a Madeira sauce.

I’ve never been able to decide if the dish is actually good or if it’s just a calculated way to torture someone cooking for a dinner party. In its ideal formation, the tenderloin should be rare, the pastry should be crisp and light, and the strata between beef and pastry should be warm, rich, and earthy, set off by the acidity of the wine in the sauce. Delicious, yes, but other than to prove that you can do it, I can’t really come up with a culinary justification for why these things must be wrapped together.

If you think about it, the flavor profile of a beef Wellington is tender beef surrounded by rich animal fat and mushrooms, held in a crisp exterior, with an acid counterpoint on the plate. That description also fits a bacon and mushroom cheeseburger on a toasted bun with mustard. And there’s a fair bet that the cheeseburger is about a decade older than the Wellington we’ve described above.

No, really. Everybody has a theory on how this dish ended up sharing a name with the Duke of Wellington, the guy who beat Napoleon at Waterloo. Some say he liked his steak rare (maybe, but why not call it beef anybody-with-taste if that’s the case), some say it looked like the boots that were named after him (I… guess… if your boots don’t have room for your feet…), some say his chef made something like it (extraordinarily unlikely, given that we didn’t make anything like it for another hundred years afterward).

Well, let’s look at some Wellingtons. Older references of this dish would hypothetically be titled something like beef à la Wellington. But if you look at recipes with the Wellington name before the 1930s, they don’t look anything like this.

Consider this 1867 Wellington recipe from London, published in The Cook’s Guide, and Housekeeper’s & Butler’s Assistant by Charles Elmé Francatelli:

And then there are dishes that just show up in menus, like this mention of a braised beef a la Wellington from the May 11, 1902 edition of the Bisbee (Arizona) Daily Review, where it was being served as part of the menu for dinner at the Copper Queen hotel. The Altoona (Pennsylvania) Mirror‘s October 8, 1906 edition reports a baked ham a la Wellington being served at the Colonial Hotel. An 1899 menu from a transatlantic ship has a filet de boeuf à la Wellington of some kind that’s being served with a lobster sauce. That sort of thing.

Then we move onto a wellington that’s a fish stuffed like a chicken and baked–this from 1919’s The International Jewish Cookbook by Florence Kreisler Greenbaum:

Note that 1919 is also the year of the first series of Downton Abbey, which I bring up because The Unofficial Downton Abbey Cookbook includes a beef Wellington recipe with the claim that it would be “the staple for many a dinner at Downton Abbey.”

It takes a real bit of work to manage to make a statement about a fictional series that is categorically untrue. Nevertheless, the only way Downton Abbey has had any beef Wellington in the years 1919 to 1923 (the most recent Christmas special) is if someone brought them from the future.

One early mention of a dish that might describe what we know as beef Wellington (but we can’t be sure) comes in a profile of a chef that worked for the Pacific Coast railroad, Paul Reiss, that appeared in the May 9, 1936 edition of the Centralia (Washington) Daily Chronicle:

The mention of Lord Kitchener is interesting. Usually, that refers to Field Marshall Horatio Herbert Kitchener, who died in 1916 after his boat struck a German mine. Paul Reiss was German, and to have had the opportunity to serve Lord Kitchener anything, they would’ve had to have encountered each other some thirty years before the piece was written. That said, on his 1917 immigration forms, Reiss listed his occupation as chef, so it’s entirely possible he was a trained chef before he stepped off the boat. But where Reiss cribbed the recipe from is anybody’s guess; this could be the 1899 lobster sauce or it could be something more modern.

It’s an interesting wrinkle that the actual Field Marshall Arthur Wellesley, first Duke of Wellington raised a bit of beef. Consider this report from the April 15, 1843 edition of the London Weekly Chronicle:

(Yep, oxen are cattle. An ox is a fully-grown castrated male bull. So the next time you see someone hesitate to enjoy braised ox tail, feel free to roll your eyes Liz Lemon style.)

Wikipedia editors continue their unbroken streak of imaginary gibberish by offering the wisdom no Beef Wellington recipes appeared under that name until 1966 (how would someone even know that?). There are a decent few examples from newspapers demonstrating that’s wrong, but here’s one particularly suited to our recipe above, from the October 2, 1958 edition of the Appleton (Wisconsin) Post-Crescent: 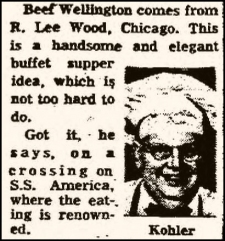 Let’s just… try to focus on the fact that the person who submitted the recipe says tasted this on the S.S. America. The S.S. America was an ocean liner operated by the United States Lines company.

While I don’t have a menu from the America, the New York Public Library obligingly has a menu from the S.S. Wilson that’s from roughly the same period (1955), with a description of the dish on its menu:

Go figure, the actual dish from the newspaper doesn’t include any truffles or larding:

Meatloaf wasn’t far behind. Compare this early iteration from the February 27, 1969 edition of The Valley News of Van Nuys, California:

Meatloaf should be placed on rack and cooled. Pastry should be pricked–brush with mixture of beaten egg and 1 tsp. of water. Decorate with cut-out from trimmed pastry.