One of the classic Italian combinations. 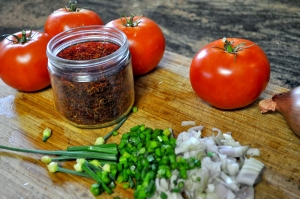 Some pairings of pasta and sauce are recognized as classics. Linguine con salsa alle vongole has earned its place in the pantheon that includes tagliatelle with Bolognese, spaghetti puttanesca, and penne with arrabbiata.

Why? Well, linguine is slightly thicker than spaghetti, so it holds up a little better to the heartiness of the clams; at the same time, the long noodles tangle and trap the sauce, aromatics, and clams alike, making a bite that seems impossibly rich for a recipe so lean.

And if you’re not trying to impress someone, you don’t even need to use fresh clams.

The rare example of a dish that’s a comfort food even if you’ve never tried it before.

I confess that I was so indecisive about what to make this week that my mother and sister started the recipe and informed me about what it was when it was underway. I don’t always get a chance to get my mother to demonstrate her recipes in person, so I was taking my sweet time to make a decision. Evidently, lunchtime is the deadline.

So thank you, mom and Dori, for your work on this. And my apologizes to Dori, who had to take the last of the pictures while her pasta was getting cold. (Your pictures are art, and art is about sacrifice, right?) 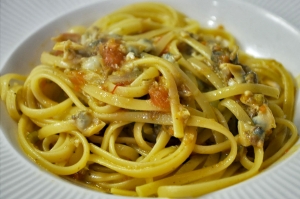 The most commonly-used words to label clams are actually the size classifications, in order of smallest to largest: littleneck, cherrystone, top neck, and chowder clams. The bigger a clam is, the chewier it is.

If we were making fried clam strips, for example, we’d want to find some large, four-to-a-pound Quahog clams for that. But we aren’t.

Instead, we want the clam to be tender, so size-wise, we’re absolutely looking at littlenecks. If that’s the only distinction you make, you’ll be well on your way to a delicious pasta. But let’s dig a little bit deeper.

What you’ll find off of the Ligurian coast coast are what people generally call vongole veraci, which, as far as I can tell, is a name for a two-inch-wide variety of either Venerupis decussata or Ruditapes decussatus. Either way, vongole veraci are assertively salty and sweet at the same time–but are scarce to find, with most restaurants serving the sweeter, milder, and outrageously cheaper Venerupis philippinarum, either harvested in the Adriatic or imported from Asia.

Here in the states, we aren’t going to get vongole veraci; most of the clams we’ll encounter are going to be Quahog clams of one size or another. We have two basic options.

One is to use fresh clams, taking advantage of our own geographic quirk: cold weather. Clams harvested in cold weather in winter are not only cleaner (as they’re sucking up less sand and mud), they’re typically fresher, as they’ve been living under refrigeration, of a sort.

While they command a higher price, they’re surely worth it–but you’ll likely have to cut them in half, because even our littleneck clams tend to be about the size of a quarter, making them far too big to eat in a bite with pasta.

The other option is to use canned clams, particularly baby clams, which would have the best texture. And if you use a brand packed in Indonesia or Philippines, the contents are almost certainly Venerupis philippinarum, the substitute used by the restaurants of Rome. (And you could, most certainly, use both.) 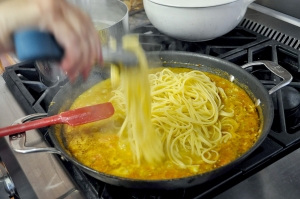 Moving on, a word about the concept of “white clam sauce” and “red clam sauce.” While Liguria, in Northwest Italy, typically enjoys its white sauces fully white, it’s much more common in San Marino to find a white sauce with saffron and tomato in it. That is not a red sauce, either in fact (where it’s a blushing yellow at best) or in taxonomy (where a tomato puree would be required).

There’s a weird kind of orthodoxy that’s developed around this idea that you can’t put tomatoes in a white sauce. It’s true that the Ligurians don’t put tomatoes in their clam sauce; it’s also the home of pesto, so tomatoes don’t figure largely into Ligurian cuisine in general. And why would they? They don’t really grow there. But Liguria isn’t the only place clams are consumed in Italy.

Now, I realize in this recipe there are a couple things we haven’t talked about yet. One we’ve talked about is persillade, a combination of parsley and garlic, which we talked about in our spaetzle recipe (and again in the fried artichoke bites with aioli).

Somehow, we’ve made it this far and we haven’t properly talked about mirepoix, although, as this is an Italian recipe, I suppose it’d technically be soffrito. Both are combinations of onion, celery, and carrot; soffrito will then add either butter or olive oil. In my entirely un-scientific experience, mirepoix tends to lean toward equal measure of each, while most soffritos I’ve send edge toward a bit more onion. But the exact quantities aren’t strictly important. 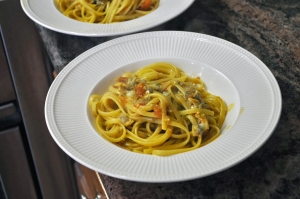 If you don’t have these lying around (but you might, if, say, it was the week after Thanksgiving and you used them in your stuffing recipe… hypothetically…), you can substitute the 3/4s cup of the mixture with 1/4 cup each of chopped carrot, onion, and celery, with 2 Tbsp. chopped parsley and three crushed garlic cloves.

And then there’s bottarga. Bottarga is salted, cured fish roe, typically from mullet or tuna. If eaten alone it tastes, well, like a fishing boat smells, but like fish sauce, a little bit can add a fresh, brine-y flavor to anything. I wouldn’t use it, but my mom was doing the cooking, and she grew up on the ocean.

I asked Dori why she didn’t take a picture of the bottarga being added and she said she assumed nobody would be able to find it, so why bother? But for the record, it’s available on Amazon and in specialty shops, and goes in with the saffron.

An early domestic mention of linguine with clams appears in the March 10, 1929 edition of the San Antonio Light in a story titled “Make a Meal of Macaroni in Lent”:

Fortunately, our understanding of this recipe has evolved since 1929–not that I wouldn’t happily eat pasta with boiled clams on top, too, if I can get a little butter.

The final step in this recipe is arguably the most important: finish cooking the pasta in the sauce. That’s good advice for nearly any pasta, but it is crucial with linguine, which needs to absorb enough sauce to make the rest of the sauce stick to the noodles. You can see in the pictures below that the pasta is still a bit stiff when it goes into the sauce, and then loosens up by the time it’s in the bowl. Aim to undercook by about two minutes till al dente.

If done correctly, the result is the rare example of a dish that’s a comfort food even if you’ve never tried it before: substantial, warming, and the perfect partner for a balanced white wine. The texture is beyond description–it’s somewhere between a risotto with more structure and a lasagna with more moisture. I wish I could describe it better, but I can’t. You just have to try it.

Peel and roughly chop tomatoes. Strain and save tomato liquid.

Drain baby clams and add liquid to pan. Add tomato liquid to pan. Cook 6-8 minutes. Add saffron. [If for some reason you feel compelled to add bottarga, I suppose you can do that now.]

Add tomatoes and clams, salt and pepper to taste.

Cook 1 lb. of pasta, but remove from water when pasta is slightly undercooked. Add pasta to pan; cook 2-4 minutes.