A roasted chicken for when you have a little more time to prep. 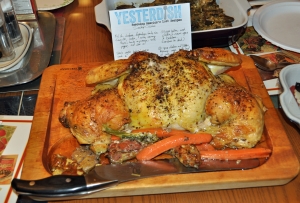 Roasting a chicken is one of the most basic cooking skills, right up there with making chicken stock or knowing how to scramble an egg. What’s strange is that removing the bones from a chicken before roasting isn’t nearly as common.

There are some culinary advantages to doing so; it helps the chicken to cook evenly, it increases the surfaces where herbs can penetrate, and in serving the chicken, you can slice it straight across like a loaf of bread, giving everyone as large or as small a piece as they like. More importantly, once you can bone a chicken raw, you can apply the same technique to making galantines and ballotines.

Too many of us immediately think of casseroles when we think of prepare-ahead dinners. And there’s nothing wrong with casseroles, but we shouldn’t sublimate our culinary aspirations entirely to convenience.

The reason the boned-out roasted chicken is “Sunday Chicken” is that you can do the time-consuming work of boning the chicken (it takes about 40 minutes unskilled and about 10 skilled, though I’m sure some people can do it faster) and preparing the herbs and vegetables on Saturday, then cook the chicken slowly on Sunday, and have a nice meal after church. And by church, I mean football and not church. 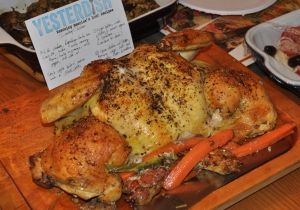 In that sense, this is more of a technique than a recipe; any combination of herbs and vegetables you enjoy with chicken would work, and that’s why there’s no set quantities on the produce. My personal tastes would always include garlic, rosemary, carrots and leeks, but you could do something with citrus, mint and rosemary, or something more earthy with parsnips and beets, or any combination that you have on hand.

My mother is doing the heavy lifting here; to be totally honest, she prepared this meal just to eat, and then I thought we ought to post it as a recipe, but she hadn’t taken pictures of the boning of the chicken, so I actually made us acquire another chicken so I could photograph the process of boning it.

We didn’t bone out the wing sections, so the slice of breast with the wing attached is something a bit like an airline chicken breast. It’s not that it’s that much more difficult to do than boning the rest of the chicken, it’s just that the wing sections alone add an additional five minutes each to the boning process, and bones have never slowed anybody down when eating chicken wings. 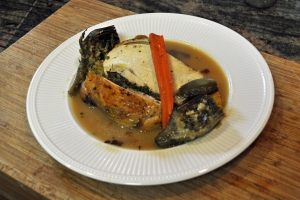 The plate here has a slice of dark meat in the foreground with a slice of breast in the background. They’re sitting on a slice of buckwheat polenta with mushrooms and Fontina cheese, covered in a mushroom gravy made with the chicken juices, one of the carrots that had cooked with the chicken, and a split baby artichoke.

Some longer descriptions of the boning process are in the captions of the images below; when you click to enlarge them, they’ll pop up underneath.

Too many of us immediately think of casseroles when we think of prepare-ahead dinners. And there’s nothing wrong with casseroles, but we shouldn’t sublimate our culinary aspirations entirely to convenience. And the beauty of boning a chicken the night before is that, if it all goes askew, you have a whole night to cut it into pieces and make chicken salad instead, and nobody would be the wiser.

Start the night before; start to cook in cold oven.