Vegan soybean souffle, that is. So no eggs. 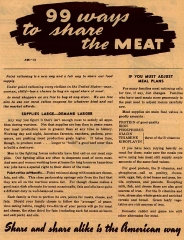 The soybean souffle (though not necessarily the strictly vegan iteration) has a history longer than you’d think. In 1942 (the picture is of the revised 1943 edition), the Home Economics Bureau of the Department of Agriculture put out a circular on meat substitutes called “99 Ways to Share the Meat” that included the following:

Press cooked dry soybeans through a coarse sieve or grind in a food grinder for pulp to make soup, croquettes, loaves, souffles[….]

But even then, soybeans in souffles was not a new idea. Consider the following recipe from the March 30, 1939 edition of The Windsor (Ontario) Daily Star:

A random fact for your north-of-the-border menu-planning: Canadian ovens retain imperial measurements, so even today, you can’t identify whether a recipe has a Canadian origin by the fact of the cooking temperature being written in Fahrenheit. (Although, since Canada didn’t go metric until the 1970s, that’s neither here nor there for this particular recipe.)

Bake in an oven at 325 deg. for about an hour. Flat baking dish. Serve with tomato sauce.

Try on sandwich with mayonnaise and slice of tomato.