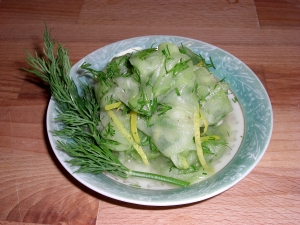 When you’re having something like chorizo and chilies macaroni and cheese, you want an acidic bite to cleanse the palate. Contrast is required to fully appreciate the richness of some dishes; it’s why pickled ginger comes with sushi, mustard goes on a hot dog, and in a pairing that’s a close cousin to this one, dill pickles come with grilled cheese sandwiches.


The basic character of a vegetable can change when it’s prepared in a slightly different way. 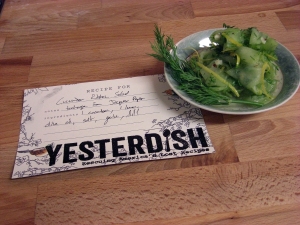 The technique of cutting strips of cucumber with a vegetable peeler comes from Jacques Pepin, who demonstrated it to garnish (if I recall correctly) his instant cured salmon (slices of salmon laid on top of salt). But that instant curing technique works equally well with the cucumber itself; people have been “instant curing” sweet pickles by packing them with sugar to draw out the water for generations.

A moment of myth-busting: some people will say not to rinse the cucumber after you’ve salted it because you’ll put back the water you’ve leeched out. These people aren’t really understanding the situation. The salt collapses the cells in which the water is being held. Rinsing salted cucumbers doesn’t reintroduce water into the cucumber for the same reason that blowing air on a popped balloon doesn’t re-inflate the balloon. 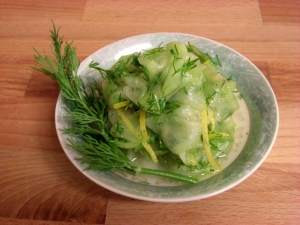 If this salad wasn’t being served with something creamy, you could replace the lemon juice and olive oil with Greek yogurt, sour cream or creme fraiche. (It’s a long story, but I can’t have uncooked yogurt. Seriously. I used to love it. So if you don’t see me use it often, that’s why.)

One thing this salad illustrates is that the basic character of a vegetable can change when it’s prepared in a slightly different way. Once the water is drawn out of cucumbers, the flavor concentrates into something almost herbal, and the texture turns into something sort of like a sauteed green pepper, firm and with a hint of crunch.

There is absolutely no excuse for not making this tomorrow. If you can hold a vegetable peeler, you know the technique, and cucumbers cost about as much as the electricity it’s costing you to read this.

Peel cucumber. Then, using peeler, slice cucumber into strips, turning when you reach seeds. Discard core of cucumber with seeds.