In 1964, Hunts test-marketed two new flavors of ketchup that they launched either in very late 1964 or early 1965 (depending on which market you lived in). I’ll let the cast of My Three Sons tell you about them.

Hmmm. A few thoughts. First, “I’d rather have eggs than a hamburger,” said no kid, ever. Second, I’m not entirely sure what he meant by barbecued eggs, because there are lots of recipes called barbecued eggs.

For example, there’s scrambled eggs with barbecue sauce, as suggested in this advertisement from the November 25, 1952 edition of the Tucson Daily Citizen (advertising Gebhardt’s Barbecue Sauce, from the original brand of chili powder, as we discussed in the post for chili powder from Martinez, California):

And this one, from the March 16, 1953 edition of the Carroll (Iowa) Daily Times Herald:

Then there’s this version (that speaks to me a great deal more) from the July 16, 1956 edition of The Lima (Ohio) News (if you’re wondering, the theme of the paper’s weekly cooking contest that week was “barbecue cooking”):

(Click to expand more information about the author of this recipe.)

Mrs. Wilmer Gratz’s name was Audrey, born Audrey L. Fruchey, and her husband was a jerk. No, really! A soda jerk, according to the 1940 census. Audrey was a telephone operator and the pair had two children at the time. 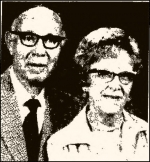 Before the marriage, Wilmer worked in a cannery. They lived in Ohio until retiring to Florida in the 1960s.

The pair married in 1927 and only parted in death; Wilmer passed in 1982 and Audrey in 1990. They’re buried in Putnam County, Ohio, next to each other. (The image to the right is from the August 21, 1977 edition of The Lima (Ohio) News, announcing their then-imminent 50th wedding anniversary.)

Audrey frequently entered the contests for recipes and craft ideas in The Lima News. She won another second prize (this time, of $5 cash) in the “snack treats for company” contest. From the January 7, 1963 edition:

But back to Hickory Joes. What would you serve with a Hickory Joe? Well, here’s what the Blue Island Junior High cafeteria served with theirs, according to the October 6, 1966 edition of The (Blue Island, Illinois) Sun-Standard:

But as for hickory ketchup, market researchers made it possible. From the January 21, 1965 edition of The Denton (Texas) Record-Chronicle:

To me, it’s tough to pinpoint exactly whom this product was intended to serve. Hickory barbecue sauces were on shelves at least from the 1940s onward, and liquid smoke for decades before that. Either way, it disappeared from advertising sometime around 1983.

Fortunately, thanks to the aforementioned liquid smoke, it’s something you can re-create.

Cook ground beef, onion, and green pepper in a skillet until meat is lightly browned. Pour off excess fat.