Is it time to harvest the fried crabmeat and Parmesan yet? 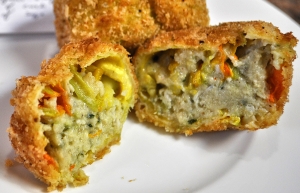 Why, as it happens, yes, it is. On the East coast, zucchini season runs from around May to early September. For those of us in the cities, this means we start to see zucchini with the blossom-end still attached show up at farmer’s markets.

But if you live in an area where lots of people have backyard gardens, you’ll probably have a neighbor or two who over-planted zucchini.

You know the neighbors I’m talking about. First, they show up with grilled zucchini or a zucchini pasta salad at the Fourth of July. Then it’s zucchini bread or zucchini muffins by August. Finally, about a week before labor day, they’re just showing up with baskets of the squash, muttering to themselves, trying to remember where they saw a recipe for pickled zucchini or a zucchini-based breakfast sausage.

This problem can be avoided, however. And the solution is delicious.

The zucchini blossoms themselves, once cooked, take on a texture somewhere between the leaves of an artichoke nearest the heart and the crisp skin of a perfectly-cooked French fry. And those are two of my favorite things.

See, the trouble is, your neighbor likely started with seeds, or a bunch of baby plants, and thought they’d grow a bit like carrots. Once carrot seed grows up to be one carrot. So they planted quite a few zucchini seeds. Seems logical.

That’s a lot of ratatouille, no matter how you stew it. But you can nip this problem in the bud, semi-literally, by picking the blossoms and eating them. 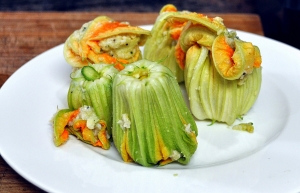 Both kinds are required to grow zucchini. Bees carry the pollen from the stem-flowers to the squash-flowers. If you clear all of one kind of blossom or the other, you won’t have any zucchini from that plant.

In cleaning zucchini flowers, the important thing is to rinse them inside and out, mostly to ensure you didn’t pick up any tourists en route to the table. Dry them off as best as you can, particularly if you’re frying them later. As you’re doing this, you’ll notice the texture of the raw blossom is naturally a bit elastic, yet delicate.

There’s an optional step we usually don’t follow: removing the pistil or stamen from inside the blossom. (It’s a flower, after all.) Some people remove them because they feel that the taste from the pollen can be a bit bitter. I haven’t experienced that, particularly if you’re stuffing them so the interior stays moist. A little astringent, maybe, but not in a bad way, and the springy expansiveness of the blossom gives it a mushroom-like texture. 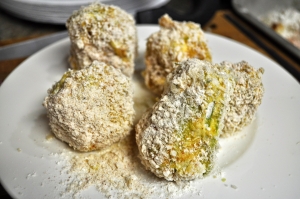 Once you’ve cleaned the blossoms, you’ve got options. You could chop them and saute in butter and garlic to make a sauce for pasta. You could batter-fry them just as they are, producing something that’s a bit like delicate fried onion petals with a less aggressive flavor. Or you could harness the elasticity of the blossom and stuff it, as we have here. Ricotta would be traditional, but if you’re going to leave in the earthy interior, why not pair it with crab?

If you’re going to fry them, you’ll notice that the zucchini blossoms themselves, once cooked, take on a texture somewhere between the leaves of an artichoke nearest the heart and the crisp skin of a perfectly-cooked French fry. And those are two of my favorite things.

We talked about the history of zucchini itself in our post for Yesterdish’s zucchini patties. An early stateside mention of stuffed zucchini blossoms appeared in a blurb in a story about edible flowers. From the April 16, 1916 edition of The Fort Wayne (Indiana) Journal-Gazette:

Like many items in Italian cooking, precisely when they arrived stateside is hard to say, as Italian-American communities continued to make the specialties of their homeland without feeling too much of a need to advertise it. But they were certainly novel to the readers of the November 4, 1950 edition of The (Benton Harbor, Michigan) News-Palladium: 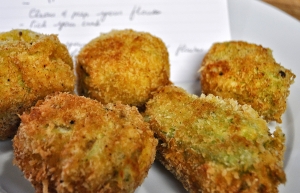 My grandmother tells a story of a neighbor of hers who picked a bouquet of zucchini blossoms because they looked so pretty. She informed the unfortunate fellow that he’d done violence to his fantasies of future zucchini-based treats by picking eight of the male blossoms required to pollinate the females. He was upset with himself, but looking to make the best of a bad situation, she fried the handful of blossoms he’d collected.

He ate the lot. Then he went back to his garden, severed every flower attached to a zucchini plant, and returned to her with the request that she make the best of the rest of the situation, too.

Clean and prep your flowers.
Pick your crab.

Prepare your stuffing: 6 oz. of crab will fill 6 flowers, depending on size of flowers.

Mix all the stuffing ingredients and fill each blossom loosely; close them a bit.

Dip in your leftover beaten egg.

Fry to GPD [Golden Brown and Delicious] and eat! They are delicious!