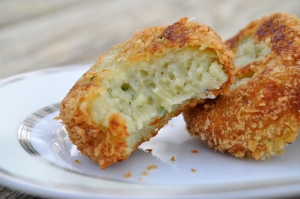 Oh, sure, you’ve got options. You could use one of the potato cake recipes from the Sterling, Colorado box, provided you’ve got leftover, not-too-salty mashed potatoes. Or you could make a hash, like this one from Avon Lake, Ohio, if you’ve got intact potatoes you can cube.

(Related lobbying: I think anyone who makes a hash on the show Chopped should be sent home on immediately. You’re on a cooking show where you’re supposed to transform ingredients and you chop them up and mix them together? It makes me want to go Vincent Vega on the panel and say, “Freitag, if you give this nimrod ten thousand dollars and the title of Chopped champion, I’ll shoot him on general principle.”)

There are soups, like this cream of potato soup from Ceres, California; or breads, like these ice box potato rolls from Sun City, Arizona; or a casserole, like this cottage pie from Avon Lake, Ohio. And of course, there’s always the croquette, like these sweet potato croquettes from De Soto, Kansas. 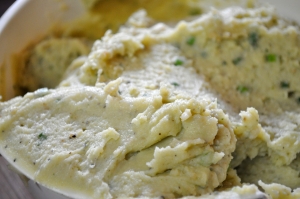 What’s the difference between a puff and a croquette? Well, there’s some overlap between the two, but not all puffs are croquettes, and vice versa.

The name croquette comes from the French verb croquer, meaning “to crunch.” To achieve this, most croquettes go through a traditional breading process, starting with flour, then egg and milk, and then bread crumbs. The filling also tends to be heavier than a puff, although still lighter than mashed potatoes.

A croquette is a substantial piece of a meal, one that can substitute for proteins in some situations, as it does when stands in for katsu, smothered with a Japanese curry sauce in a vegetarian bento box. And that’s delicious, but it’s not a potato puff.

The texture of a puff tends to be more crisp than crunchy on the outside, and lighter on the inside, with more air beaten into the (well-lubricated with butter, to avoid a glue-y mess) potato. If you covered a potato puff with a curry sauce over white rice, you might eat the thing and not even realize it. I guess if I was trying to summarize what I think separates puffs from croquettes, I’d say that a croquette is substantial while a puff is more ephemeral. You wouldn’t eat more than three croquettes, but you wouldn’t eat fewer than three puffs. 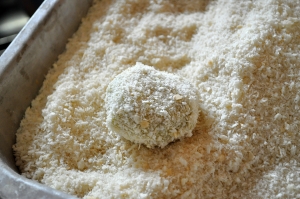 Usually, if we have potato puffs, it means Dori and I are visiting our parents–neither one of us keeps potatoes as a stock pantry item, though for opposite reasons. Dori can’t be trusted with potatoes. She’ll eat them up in a couple of days. I tend to eat a couple of potatoes a month, which makes it easier to buy them a la carte.

But when we visit our parents, well, our mother never learned how to cook for fewer than ten people, which was inconvenient, in a family of four.

Let’s talk a bit about the mechanics of the recipe. It’s important to choose starchy potatoes, as opposed to waxy ones. The difference is pretty simple: starchy potatoes (like the russet) have low levels of moisture and high levels of starch. They tend to fall apart when cooked, and that makes them delicious options for any mashed or fried application–they give fries that “fluffy” interior.

Waxy potatoes (like most fingerling varieties) tend to have more moisture and less starch, and accordingly, more free carbohydrates. They tend to hold their shape better, which makes them great for salads and the like. Not so much for mashed applications. They are, however, less likely to turn gummy. 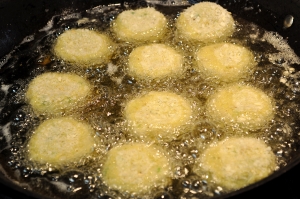 So why do potatoes turn gummy? Well, remember when we talked about the structure of starch (and the TV show Archer) in the post for mochi from Martinez, California? We learned about how starch is made of two carbohydrates, amylose and amylopectin, which are themselves polymers (long chains) of glucose.

Among the things that can break apart starch molecules are heat, water, and shear force. When you put the potato in boiling water, the starch swells and starts to absorb water. If you overcook them, or put them into a moving food processor for any meaningful length of time, the starch structure will actually break down completely. At that point, the free-floating polymers will start to form hydrogen bonds with each other wherever they happen to be.

This effect–the cross-linking of polymers–results in a substance that seems to stick to itself, because the random net of polymers tugs on the entire mass whenever you move it. That’s fantastic, provided you’re trying to make vulcanized rubber, a rubber that’s more durable because its cross-linked polymers hold together better. For mashed potatoes, not so much.

There are lots of ways to avoid this result. Rinsing the water off of the potatoes helps a tiny bit by removing excess amylose on the surface. Cooling them in the fridge overnight before mashing will re-crystallize some of the remaining starches. But the traditional way of preventing the cross-linking of starch polymers in whipped potatoes was to add butter and/or cream. 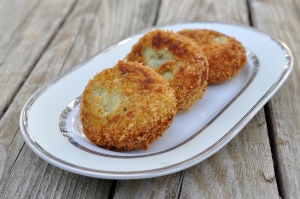 For a long time, chefs thought the fat in butter or cream did most of the work, and it might help somewhat, but it seems today like it’s the protein that’s magical. Cream and butter have an enzyme called diastase that breaks amylose and amylopectin into much smaller maltose (which is just two glucose molecules holding hands).

To put this in more accessible terms, imagine that you’ve got a big knot of shoelaces in a bag. You untangle them, but you put them back in the bag. At some point, your efforts of rummaging around in there will end up re-tangling the shoelaces, maybe worse than before. Diastase is like a pair of scissors that cuts the shoelaces into two-inch pieces, giving you a smooth, fluffy… bag of shoelaces.

Okay, science class is over. Here’s history: an early mention of potato puffs appears in the February 28, 1867 edition of the Oxford, Indiana Benton Tribune:

Meanwhile, a version from nine years later–which almost certainly calls for self-rising flour–looks more like a recipe for a potato bread pita sort of thing. From the May 13, 1876 edition of the Seymour (Indiana) Weekly Times:

But by 20th century, the winner was the fried, intact potato puff. Consider this version from 1919’s The International Jewish Cook Book by Florence Kreisler Greenbaum:

Since the site’s tooltip glossary is on the fritz, I should probably explain “spider.” It’s not the modern cooking spider, which is a wire strainer used to remove foods from frying.

In the 18th and 19th century, a spider was a cast iron skillet with three legs, designed to be used with a hearth. You could put the skillet directly on top of hot coals without worrying about it tilting as the coals burned (which, with hot fat involved, would be a Very Bad Thing).

As we moved to more modern cooktops, flat-bottomed cast iron pans kept the name from their three-legged predecessors for a while. So in 1919, a spider is a cast iron skillet.