A recipe from a great year in Italian history. 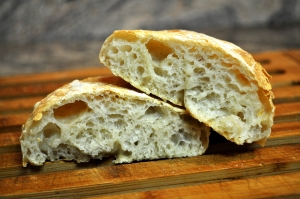 Ciabatta is often described as pane rustico, or rustic bread. In Italian, the word rustico evokes simplicity, and images of contadini–peasant farmers.

Similarly, for most Americans, ciabatta evokes in their mind the image of an Italian bakery a few centuries ago, turning out loaf after misshapen loaf of bread to be carried to the open-air market.

A comforting vision that plays well for marketing, to be sure, but the reality isn’t quite like that.

Making ciabatta is a lot like making ceviche in that the only difficult part is psychological.

The word ciabatta refers to an old, worn slipper, something comfortable but poofy. Zoccoletti are “little clogs,” and it seems a fitting term for the sandwich-size versions in the top image. But while it’s a bread that’s rustic in the sense of being simple, it has a history just slightly longer than the Safety Dance. 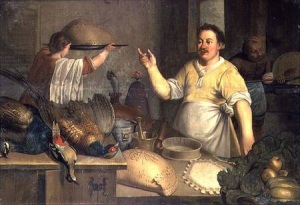 To be fair, ciabatta physically resembles bread that might have been made in Italian villages since the Renaissance. At that time, most people didn’t have ovens suitable for bread-making–typically they’d have open stone hearths, if they were lucky enough to have even that–so they would bring their dough to the baker in the morning and pick up the loaves later in the day.

But that bread wasn’t ciabatta. It resembles that bread in that it’s a rustic loaf, not something highly shaped or braided. The baker made his shaped breads to be sold; the peasant who dropped his dough off got back a loaf of bread that looked substantially like whatever he left there.

(Unless, of course, the baker shaved off a bit of the peasant’s dough to sell as his own creation, which was a problem ever since there were bakers. In ancient Eygpt, a baker caught selling light loaves had his ear severed and nailed to the door. In theory, the practice of the “baker’s dozen” originated in 13th century England to avoid the perception of light deliveries by adding an extra loaf to every dozen. But that’s another story.) 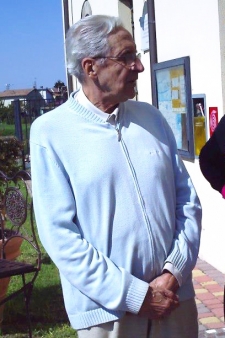 But ciabatta is something more than just bread that isn’t shaped; it’s a light, open interior with a crisp exterior, and for the most part, that wasn’t something you would drop off at your baker in the 16th century. Particularly not since the dough for ciabatta is almost a batter.

So instead of the jolly baker depicted in the above painting, you should probably envision a guy who looks more like the guy to the left.

Exactly like that guy, actually. That’s Arnaldo Cavallari, and he’s the guy who invented the modern ciabatta on or around September 21, 1982.

I’m not saying that this means ciabatta as we know it isn’t a traditional Italian bread, but I got this picture from what appears to be his Facebook page.

Cavallari was a race car driver who won races for Alfa Romeo and is a man who strongly feels Italian pride, even for an Italian. (In fact, one of the statuses on that Facebook page is mocking Italian politicians who drive foreign cars, and he points out that the Italian cars always beat the foreign cars in races.) When he retired from racing, he joined the family milling business in Adria. 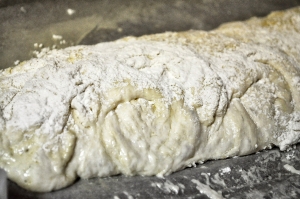 What concerned Cavallari was that, in 1982, most bread for sandwiches was imported as shaped dough from France and then baked in Italy; this offended him both as a matter of pride and because he didn’t like that additives were often used in the baking. For example, citric acid was (and is) frequently added to bread as a preservative, or enzymes were (and are) added to accelerate gluten formation.

Cavallari set up an “experimental bakery” near the family mill, and would go back and forth, coming up with different flours to try in his different methods. Ultimately, what he came up with was a flour he called typo 1 Italia, which has a protein content of about 10% and generally resembles a slightly less refined American bread flour. To this, he added only the ingredients he felt should go into bread: flour, salt, yeast, and time.

In 1985, the bread was imported to London, and in 1987, the Orlando Bakery in Cleveland got a license to make and sell authentic ciabatta in the U.S. Authentic, in that it adhered to the traditional methods of making ciabatta, which by then had been around for hundreds of… weeks.

Not that there’s anything wrong with that. Obviously, I don’t think so, or we wouldn’t be telling you about it, or suggesting you make a version of it. As we don’t live next to a flour mill in rural Italy, we use slightly different techniques to achieve similar results. 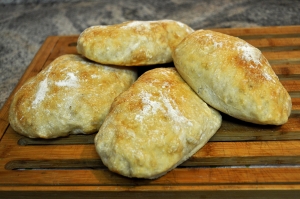 The quality of commercial yeast has changed substantially since the early 1980s; we add vinegar to replicate the very slight sourness that Cavallari achieved by using a biga, or starter. Cavallari himself cautions that is was not to be a sourdough, saying the biga is “just to get the engine running.”

Making ciabatta is a lot like making ceviche in that the only difficult part is psychological. At every step of the way, your brain will tell you “this doesn’t look right” or “this dough won’t bake properly.” But as Nancy Silverton has said, the one rule in bread-making is that the wetter the dough is, the bigger the bubbles in the result, so tell your brain that this is indeed the correct method and that the recipe will ultimately work.

I guess that only leaves the question of why I said this was a bread from great year in Italian history. Obviously, that’s because Rocky III came out in 1982. I pity the fool who don’t think that’s a great accomplishment!

Shape by pulling (yes, use oven spray–makes the job easier)–proof and rest 45 minutes.

Preheat your oven to 500 degrees.