What makes this bread different from all other breads? (See what I did there?) 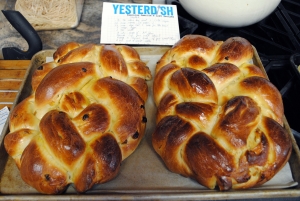 If there was ever a recipe that didn’t need Yesterdish to tell its story, it’s challah. It has been so obsessively examined for so many centuries that we not only know the practical history, we know volumes upon volumes of metaphysical history that ascribe layers of religious significance to every step of the process, starting with when to bake it and ending with covering it at the table.

In fact, perhaps the strangest thing about challah is that the 700-year-old product we recognize is the focus of traditions observed for at least three times that long (yes, I realize that tradition says it was over four times as long, but I’m going with the date of a fixed, recorded unified Torah).

When fresh it’s soft and almost like a less sweet cake; when it’s toasted, its bread-like character is revealed.

That’s quite a birthright, if you think about it. I suppose challah is the chosen bread. (Hey, don’t look at me. I would have chosen bagels.)

But let’s talk about the actual recipe, first. Challah as we know it emerged in in the late 14th or early 15th century in Eastern Europe, most likely from Vienna, where it shares a common origin with brioche. 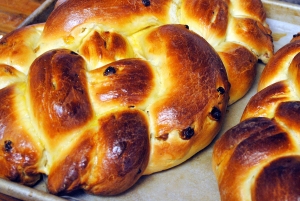 Vienna had access to all the ingredients common to both breads: eggs, salt, refined flours, cultivated yeasts, and a tradition of shaping breads. It also had the essentials of challah (refined oils, honey, and dried fruit) and brioche (butter).

Which brings us to an important point: while challah and brioche have a lot in common, dairy is not one of them. Challah recipes containing butter and cream are really just oddly-formed brioche. It’s not that there’s anything inherently un-kosher about using them, it’s that, having used them, you couldn’t put them on the same plate as beef (or meat, depending on how you interpret that rule).

Challah isn’t brioche. If you want to make a brioche, you know where to find the recipe. While brioche can take on many characteristics by altering its recipe, challah embodies the range of possible characteristics in one recipe. When fresh it’s soft and almost like a less sweet cake; when it’s toasted, its bread-like character is revealed.

The traditions surrounding challah are another megillah entirely. I couldn’t possibly cover them all here, so consider this an appetizer portion. 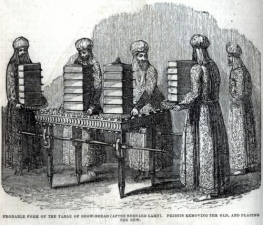 Leviticus 24:5-7 describes the preparation of showbread for the ancient temple: twelve loaves, two stacks of six, would be prepared. On top of them, a container of frankincense and salt would be burnt as an offering to the almighty. At the end of the week, the priests would make new bread and eat the old bread, making a new offering.

This was, of course, only one of many traditions in an elaborate system of government, in which kings, prophets, judges and priests–all of them experts in the Torah–would each play a role in interpreting the obligations of Jewish life, a division that sort of worked as an elaborate system of superstitious checks and balances.

After the Romans destroyed the Second Temple in 70 A.D. (the first had been destroyed by the Babylonians in 587 B.C.) and the Jewish people left Jerusalem, there were no more kings, prophets, judges or priests, as those had been titles in a now vanished civic structure. Instead, there were rabbis; those men who were scholars of the Torah and sought to teach its meaning. Their first challenge was to adapt the traditions of the practice of Judaism to this period of exile.

As there was no temple, there was no altar for showbread. So rabbis said to make ceremonial bread at home, and to dispose of (by burning or otherwise) a portion of that bread to symbolize the portion given to the altar and to remind us of the destruction of the temple. Also, there should be two loaves, to remind us of the double-portion of manna given on Friday to make it possible to observe the Sabbath. So while these loaves were not the sweet, egg-enriched bread we know today, and they weren’t called challah, the stage was set for the 14th century introduction of challah, which stepped into this fully-formed tradition. 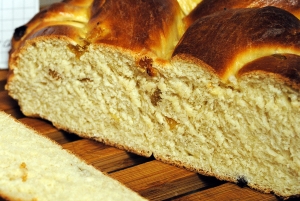 A couple of additional notes. Generally speaking, Jewish traditions are divided into Ashkenazi (connected to Eastern Europe) and Sephardic (connected to the Mediterranean). About 80% of modern Jewish people have Ashkenazi heritage, and this is the challah for that tradition. But the Sephardim (or as my sister calls them, “Hank Azaria Jews”) have a somewhat different challah. I’ve heard it described as resembling pita bread, but I don’t agree at all–it’s more like smaller, rounder, olive oil-based loaves, often flavored with anise.

(There’s another bread called chubzeh that resembles pita on the exterior but isn’t hollow; some orthodox sephardim use this on the Sabbath because they feel challah is too rich for a solemn occasion. But that doesn’t make it challah.)

Finally, just to give you an example of the depth and specificity of traditions governing Challah, here’s one of thee rabbinical reasons why Challah is covered at the table: there’s a hierarchy of blessings and a hierarchy of when we should eat things, and those two conflict, so we cover the challah so it’s not shamed that the blessing for the wine comes before the blessing for the bread, even though the bread ranks higher in the eating order.

And you wonder where Jewish lawyers come from. (I’m tempted to make a Condescending Rabbi meme. “Oh, your 20-year-old higher education regulations that someone has the power to change are hard to interpret? Tell me what that’s like…”)

For another use of this dough, see Yesterdish’s onion poppy seed rolls.

*If you freeze, it takes 5 hours of thawing!