Because challah is too great not to share with savory flavors. 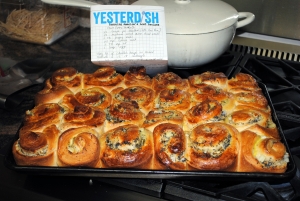 While Yesterdish’s challah has some sweetness in the dough, most of the sweetness comes from the raisins. You can use the same dough to make savory rolls, especially if you use ingredients that play equally well with salt and sugar, like onions and poppy seeds.

In fact, there’s a sweet poppy seed roll that originates in Vienna, just like challah; it’s a lot like a roulade cake, with ground seeds mixed with sugar.

But this is a savory, aching to snuggle up next to a steak. 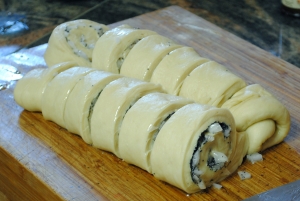 The cultivation of poppy seeds dates back to Bronze Age, where they were cultivated on Crete. In 1500 B.C., Egyptians used them as a sedative, which isn’t all that much of a stretch, given that poppy seeds are collected from the opium poppy, although at a much later stage of maturity.

The potential exists for other physiological consequences. Poppy seeds are high in magnesium and zinc, two minerals that increase blood flow and the production of certain hormones in ways that you’d normally ascribe to foods like oysters and other reported aphrodisiacs.

A nine-gram serving contains over 30 milligrams of magnesium, although, given that it also contains 29,700 individual seeds, its use as an aphrodisiac in ancient times was probably limited by the gatherer’s exhaustion after having collected and processed between 80 and 100 plants. 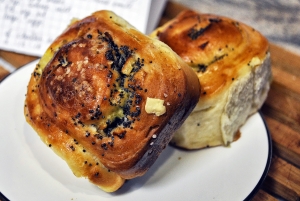 Fortunately, we have people for that, today.

But you should enjoy these rolls even if your most romantic intention is to caress the butter knife. The baking spray gives these rolls a crisp bottom, while the interior stays light and soft, almost like a Parker house roll. The taste is somehow buttery, slightly spicy, and entirely satisfying.

I used mine to soak up the juices from a rare roast beef, but roasted peppers, sharp cheese, or just plain butter would be just as good. Or, if you’re really feeling fancy, split the roll, grill the inside over an open flame, and then fill it with figs, basil leaves, and a sticky balsamic reduction.

Take 1/2 of challah dough as mixed.

Roll into a 12″ x 18″ rectangle. Sprinkle onions, poppy seeds and salt all around, leaving a 1 inch border.

Brush the border with oil. Roll like a jelly roll. Pinch the ends.

Cut 12 rounds by half/half/half method. [Note: unless you’re a mathemagician, what you want to do is mark the roll at the halfway point, making two; then mark each half into thirds, making six; and then mark each third into half again, making twelve.]