Eritrea is a place where cultures have collided for centuries. 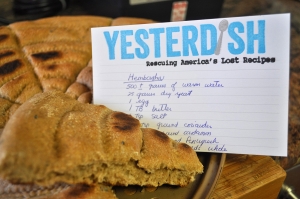 Note, however, that while these cultures co-existed in the 1960s Eritrea my mother left–mostly peacefully, because everyone was too concerned with Ethiopian politics to fight with each other–the interaction between food traditions was somewhat more muted than the fusion we see has normal today.

Oh, sure, there were little things. After the Italians had been there a century or so, it was considered acceptable to put an Italian salad on the zighini plate, to eat with the injera, and eventually someone realized you could put the spice melange berbere into a tomato sauce to make a spicy condiment called silsi, but that was the extent of it. If you knew where someone was from, you knew what they were going to eat.

Slightly charred on the exterior, with a interior that’s slightly rich, slightly sweet, and the perfect thing to dip in your tea.

The Eritreans of Italian extraction would usually have a merenda with cheese, fruits, and fresh-baked breads or brioche. The Greeks and Turks would lean toward traditional mezédhes. (The Americans would probably have a cigarette and a shot of whisky because what the heck is teatime?) 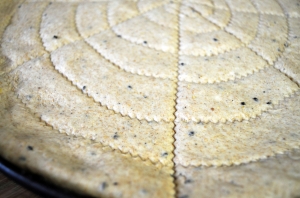 For the Eritrean Habesha, teatime usually meant chai tea with kemem (spices) and a piece of himbasha.

There are very few sweet foods in traditional Eritrean cuisine, but himbasha is one of them; slightly charred on the exterior, with a interior that’s slightly rich, slightly sweet, and the perfect thing to dip in your tea. Some versions are even sweeter than the one here, using honey in the recipe. (Some even show the effect of contact with Europe and use olive oil and white sugar.)

Being of mixed ancestry in an Italian-Eritrean home, my mother, her sister, and their cousins weren’t generally treated to himbasha at teatime. This was a chiefly political consideration. The Italians had the perception that himbasha was food for “poor” people. (The Habesha couldn’t have cared less what the Italians thought about most things, especially their food. The Habesha had a fully developed cuisine in the second century, when culinary stronghold Naples was little Greek colony serving bad versions of baklava.)

Thus, the children of my mother’s forward-thinking generation had to employ strategy to come across himbasha. Her cousin Bruno would take his white bread and trade it–a risky gambit, because it was premeditated and left witnesses. (You laugh, but Dori had the presence of mind to frame me for her wrongdoing when she still had pigtails. But that’s another story.)

My mother used a bit more guile. She would just happen to find herself wandering past the house of a neighbor and stopping in to say hello just before 4 PM. And if that neighbor happened to be Habesha, and happened to be having himbasha, well, isn’t that a lovely coincidence? 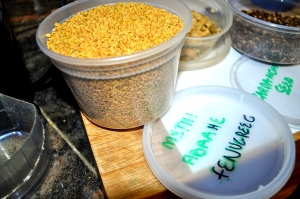 Because of its barely sweet, spiced profile, the accompaniments for himbasha could be either sweet or savory. It could be dipped in tesmi (clarified butter spiced with ginger, garlic, onions, and berbere), or drizzled with honey, or both; or with awaze (a spicy berbere and horseradish preparation that I adore but my mother hates) and yogurt, on the savory side. The easiest way to describe the balance is a less aggressive kettle corn–not really sweet or salty, but sweetish and saltyish with a comforting texture.

You might notice that the card says hembasha, but I used the transliteration himbasha because it’s more popular, even though the way we’ve pronounced it has always been closer to the former. On top of your standard transliteration issues, there’s the added wrinkle that the myriad of cultures in Eritrea, imported and domestic, all use slightly different pronunciations of the word itself, even within the same languages. But hey, I speak the language of search engines, and the masses have gone with himbasha.

Whatever you call it, a traditional celebration would involve breaking the himbasha over the back of a child at his first birthday to give him strength. I find it has quite the opposite effect on me–a nice piece of himbasha and a cup of tea and I’m ready for an afternoon nap.