A bit different than what you’re used to picking up in a plastic wrapper. 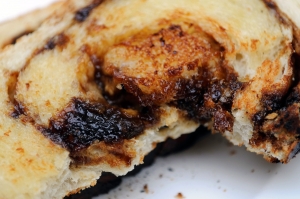 I don’t mean that as a slight to the perfectly fine products out there on the shelf. This is a sincere observation: this raisin bread is trying to do something different.

Quite a few raisin bread recipes descend from the brioche family and produce something like a loaf-shaped panettone: light, sweet, and eggy. Others are cousins of the pain de mie (which we discussed in the post for Yesterdish’s Pullman loaf), with a fine, tender crumb that requires you to delicately spread peanut butter over its surface, because one slip of the wrist and your sandwich will dissolve.

Not that there’s anything wrong with that, if you like that sort of thing, but it has its shortcomings.

The muscovado sugar’s hints of toffee and smoke linger with the vanilla, fruit, and spice to create a complexity of flavor to rival (or harmonize with) an elaborate blend of coffee.

If you’re trying to make a bread pudding or a French toast, by the time it absorbs enough egg to take on a custard-like texture, there’s no way to move it to the griddle. And if you want something more substantial than peanut butter–say, peanut butter, bacon, and fresh apple slices–the bread’s softness is not an asset. 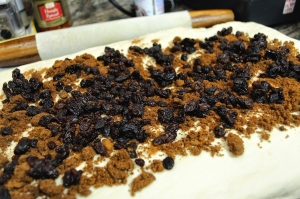 This loaf comes from another school of thought: that raisin bread can exist as an example of duality within the bread family tree–a slightly salty bread that contains its own rich sweetness. And this isn’t the delicate sweetness of white sugar, but the syrupy warmth of dark sugar enriched by raisins practically melting into the vanilla paste.

The result is fearlessly crusty while also sticky-sweet. Where the softer raisin breads are cousins to brioche, this loaf is a brother to a Nutella-stuffed baguette.

One way of harmonizing that sweet/salty divide is using dark muscovado sugar. We borrowed muscovado from Spanish (mascabado) or Portugese (mascavado), where it’s the past participle of the verb describing the process of separating sugar from molasses. (In theory, the word goes back to a portmanteau from vulgar Latin: minuscapare, or something along the lines of “reduced head.”)

We talked about the history of sugar production in the post for white layer cake from Lutz, Florida. Muscovado sugar is simply a name for sugar where some amount of molasses has been left behind; the darker the muscovado, the more molasses it contains, and as a result, the sticker it is. We used dark muscovado, which is why it has a texture a bit like wet sand.

But the flavor. Oh, the flavor. The muscovado sugar’s hints of toffee and smoke linger with the vanilla, fruit, and spice to create a complexity of flavor to rival (or harmonize with) an elaborate blend of coffee. And yet, it still has the gluten and yeast to pair beautifully with butter, like a mincemeat pie made richer.

The Oxford English Dictionary references the earliest mention of something by the name raisin bread to an 1845 edition of Blackwood’s Magazine. I haven’t found anything earlier, but I do think the context of that mention is kind of fun–here it is, reprinted in the March 29, 1845 edition of the Gardeners Gazette in London:

Too long; didn’t read? Allow me to sum up. The author says whole-grain oats are better than refined wheat flour, and also the following:

Raisin bread is one of those things that the Food and Drug Administration has awfully specific feelings about. Specific enough to appear in a regulation that requires, among other things, that “[n]ot less than 50 parts by weight of seeded or seedless raisins are used for each 100 parts by weight of flour used.”

(Click to expand the full regulation, if you're curious.)Obviously, things we bake for ourselves aren’t regulated by the FDA, and the amount of raisins in this recipe is ultimately left to your taste with a cup and a half given as a baseline. But if you want to make a loaf that is guaranteed to fit the federal rule, use 420 grams of raisins (about 2-1/3 cups) to 840 grams of flour (about seven cups) in the recipe below.

Finally, don’t over-react if you take your loaf out of the oven and you see something like this on the side when you peel back the parchment:

No, that’s not a burn (unless you have the weirdest oven hotspot ever); that’s just a place where molten sugar seeped through the side of the bread. While you’ll need to be a little bit more aware of the risk of the sugar burning when toasting them, it’s totally edible and totally fine.

One last bit of housekeeping. Sorry for the intermittent original recipes lately–I’m moving at the end of the month and going to NYC for a bit soon, but in August things should be back to normal-ish!

Bake in preheated oven at 400 deg. for 20 minutes; internal temperature should be 200 deg.

sally luns (Sally Lunn)
A bun-like teacake, similar to a brioche, served warm with butter. Dates to 18th century England.
brose
A Scottish porridge, typically made with oats, although barley or pea flour could be used. The grain is mixed with boiling water off the fire and allowed to stand until tender.