A favorite from my mom’s childhood. 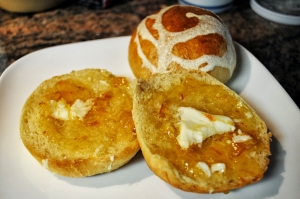 My mother (who actually can talk for herself and will soon, I assure you) was born in the city of Asmara, in what was then Ethiopia and is now Eritrea. Obviously, that had a large impact on my own upbringing, and I’ve referenced that at times in other posts. But so far, there hasn’t been much discussion about the food traditions of her upbringing.

So join us in a culinary sojourn to 1960s North Africa, and an asilo run by Italian Catholic nuns. Asilo being a kindergarten, in this context.

A sugar-dusted crust around a rich, buttery interior that holds up to jam but never needs it.

Kindergarten in Asmara was an all-day affair; your instruction began at 7:30 in the morning and continued until six in the evening, with a two-hour break at 1 PM so you could go home and have lunch, if you wanted.

For the kids who didn’t eat lunch at home, their mothers would wrap a piece of steak and a piece of butter in parchment paper. The children would turn this over to the nuns upon arrival, and then at lunchtime, the sisters would cook the meat each child brought for them. While the meat cooked, the sisters would provide pasta or soup for free as a first course. 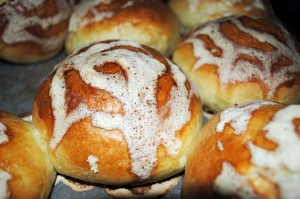 Still, that feels like a long time between meals, to me, and I’m a grown adult. You can imagine the effect it would have on a four-year-old, let alone on a nun in charge of a room of four-year-olds. Thus, at 10 AM, there would be la merenda, the snack. Snacks for la merenda were purchased from the sisters.

(You might legitimately wonder why, if you could have a free plate of pasta at 1 PM, you couldn’t get a free snack at 10 AM. I can only suggest that, based on the strong importance my grandfather placed on having pasta daily, that the snack was considered a luxury, while a plate of pasta was the absolute bare minimum of civilization that Italian or Sicilian nuns could accept, occupying a place of importance just below clothing itself and just above indoor plumbing.)

Snacks cost 10 santim; santim were the cents of the Ethiopian dollar, named the kirr. Actually, santim’s origin is the word centime, which itself came from the Latin root cent, so it’s… actually the same word. But we’re getting ahead of ourselves. Have you got a 10 santim coin?

No? Hrm. Technically you’re not supposed to get a snack without one. But that’s okay, you can borrow one: 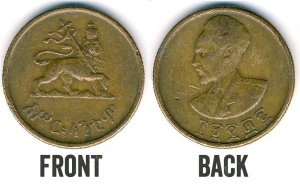 Don’t worry, you can pay me back next time you break a kirr.

But now that you’re flush, you’ve got to pick which snack you want from the selection the nuns baked today. You would have the following options:

Now, on your walk home from kindergarten, you’re going to pass a bar; and if you’re like my mother, you’re going to stop and have pizza at the bar (since it’s three more hours until dinner). So you don’t want to eat pizza in the morning. And not only is she not a huge fan of schiumini in general, but the snacks were all the same size? So we’re talking about a huge meringue. It sounds good until you actually try to eat something the size of a softball that crumbles everywhere. 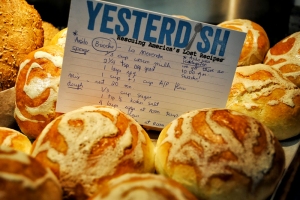 So she had the brioche, and many students did. A sugar-dusted crust around a rich, buttery interior that holds up to marmalade but never needs it. What’s not to love? Most of the children who picked brioche would eat them with butter and marmalade, as it’s displayed in the beginning of this post, but my mom ate hers differently. She peeled off the crust and ate it first. Why? Because the crust was the best part, and she wanted the best part when she was the hungriest.

(Oddly enough, as a child, I would do the exact opposite: save whatever I thought was the best part for last, so the last thing I tasted was the best thing. I think it’s substantially why I like artichokes: nature organized them so they’re a crescendo, with the best part last. It comforted me to have a pre-organized vegetable. So much less stressful.)

And now that my mom has made these for me, I can share them with you. I’ll try to wrap up soon–you’ve been so patient with me–but it wouldn’t be Yesterdish if I didn’t say a little something about the cooking, too, would it?

The French started using the term brioche in the 15th century, derived from brier, a verb meaning to knead dough, which itself came from the West Germanic root brekan, meaning break. That origin was also reflected in Cotgrave’s 1611 French-English dictionary:

Brioche as a term covers a wide variety of butter-and-egg-enriched breads, from some cinnamon bun recipes to panettone and certain hamburger buns, but generally, there are two polar extremes: bread-like brioches (where the flour and water are beaten till gluten forms and the butter is then added) and the cake-like brioches (where the butter is added at the beginning and the fat hinders the formation of gluten).

Asilo brioche is a sweet brioche, but walks a middle path, abut like Portuguese sweet bread: the butter is added comparatively early in the process, but the bread is beaten for a long period with a stand mixer to give gluten enough time to develop. The trick to walking this path is to pause the mixer if the dough is starting to warm and return it to the refrigerator to cool.

It’s well worth the planning ahead it takes to make these, particularly if you have children. The way I see it is this: the sisters at the asilo had nothing but time in choosing what to make for the students. I’m sure you don’t have unlimited time, but every now and then, it’s nice to treat your children like you do.

*Asilo was kindergarten. We got these as 10:00 AM snacks!