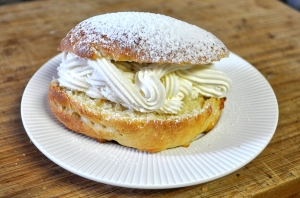 Maritozzi are sweet, soft, brioche-like buns, often flavored with orange and sometimes including pine nuts or raisins. When sliced in half and filled with whipped cream, they become maritozzi con la panna, a snack from my mother’s Eritrean childhood, which we first visited with asilo brioche.

I asked her about the iterations with raisins and quickly received the response: che schifo! Instead, she prepared these, the version she enjoyed growing up. For the record, however, the authority for the fruit-and-nut version is no less than Ada Boni, who described them as typical of Rome. So consider this my mother’s Eritrean version.

There are lots of mythological stories about how these cream-filled sweet buns got to be called “little husbands,” the root being the the word for husband, marito. One story is that women would make and sell them in the market and the woman with the best-looking buns got the most proposals. (Isn’t that still how it works, minus the baking?) Another is that a boyfriend made it as a marriage proposal, sort of like the story behind panettone.

Maritozzi benefit from a marriage of flours–the hard wheat to provide the gluten to help it rise tall, and the softer wheat to make it delicate once inflated.

I prefer to think that it was an early marketing tactic, like Ben and Jerry (before Unilever bought them out) coming up with Chubby Hubby. I think it appeals to both women and men equally; men want to eat, and women know that a married man who takes care of himself is probably cheating on her. A chubby hubby is the ultimate sign of fidelity. 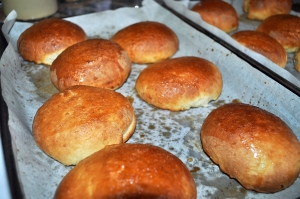 Or maybe it just reminds wives of their husbands–sweet, but messy. And they never say a word. Alle donne piacciono gli uomini silenziosi. Credono che ascoltino. (“Women like silent men. They think they are listening.”)

There’s a term in this recipe we haven’t yet encountered: Manitoba Flour. It’s important to understanding an entire class of Italian baking, so let’s talk about it.

“Manitoba flour” is a term that’s used in Europe to describe flours made from hard red spring wheat. And I guess that means we need to talk about the classification of wheat. The most basic difference is hard and soft wheat; generally speaking, the harder the wheat, the higher the protein content in the flour. As higher protein content generally means higher gluten content (depending on how it’s milled and ash content and a few other things), hard wheat is usually used for bread-making and soft wheat ends up in breakfast cereal and crackers.

The distinction between red and white is simple, but isn’t really an important part of the story, here: red wheat has substances in the bran that give it a brownish tint and stronger flavor. White wheat is a variety where the genes producing those substances aren’t present. Most of the “it’s whole wheat, but it tastes like white!” breads you see on the market are made of a blend of ground whole white wheat and refined red wheat. Although white is becoming a larger part of the U.S. harvest, it still accounts for just 10-15 percent of domestic wheat harvests. And since we’re talking about refined flour, it doesn’t really have anything to do with Manitoba flour. 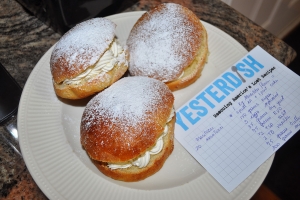 Between hard red winter wheat and hard red spring wheat, the latter has a higher protein content. So broadly speaking, Manitoba flour is a high protein (about 13%) flour used in Italy to make breads, and in the case of panettone, cut with cake or pastry flour in a 2:1 ratio to create a dough with the elasticity to hold big air bubbles. In the U.S., we have all purpose flour (about 12% protein) and bread flour (around 15% protein). So instead of two parts Manitoba flour to one part Italian soft wheat flour, you get something comparable using three parts of all purpose flour to one part of cake flour.

In theory, anyway. The properties of flour are quite a bit more nuanced than that, and some devotees of Canadian hard red spring wheat insist that there’s something about it that causes it to absorb water better and cut the rising time down by a third.

I don’t know the truth of that, and for home-baking purposes, I don’t think any of us really care. If we were making six hundred maritozzi a day, I could learn to care. At the rate of couple dozen a year, the extra 20 minutes is not remotely of interest to me. And either way, Italians use the name “Manitoba flour” to describe the protein content and wheat involved, not as a genuine designation of origin.

Oddly enough, an early American reference to maritozzi came in the context of a shortage of flour suitable for breadmaking. Here’s a mention from a syndicated column in the November 15, 1926 edition of The Lake County Times of Hammond, Indiana:

War time? I’m not aware of what war Italy would’ve been involved in in 1926–while things were tense with Germany and Ethiopia, Italy was far too deep into its own problems to get involved in large-scale war. What caused grain shortages in 1926 Italy was Mussolini’s “Battle for Grain.”

Mussolini and his Fascist government wanted Italy to be self-sufficient, and that meant increasing domestic grain production so it didn’t have to be imported. A great goal, but with a slight botanical obstacle.

Two kinds of wheat grow in Italy. In the South, they grow a variety of the hybrid known as durum, a summer wheat high in protein but paradoxically low in gluten. In bread-making, the semolina (durum flour) produces dense, yellow, flat loaves, primarily because the dough doesn’t have the gluten to hold the bubbles. While essential in pasta, most of Italy north of Sicily wouldn’t use it for anything else.

Other than that, Italian wheat production is entirely soft wheat. Soft wheat flour is fantastic for making tender biscuits, or soft cakes, or even pie crusts–but it makes lousy bread, precisely because it, too, is low in gluten. So in 1925, when Mussolini imposed high tariffs on imports of wheat, and subsidized the production of domestic wheat, the result was breads made from low-gluten wheat flours. As they couldn’t hold the bubbles made by the yeast, the breads baked into dense loaves that either had the texture of bricks (durum) or sponges (soft wheat).

Frankly, someone who would condemn a country to life without maritozzi deserves to be shot with his mistress and have their bodies displayed in the Piazzale Loreto. So… I guess… that worked itself out, more or less.

Maritozzi benefit from a marriage of flours–the hard wheat to provide the gluten to help it rise tall, and the softer wheat to make it delicate once inflated. There’s an analogy in Chinese cuisine, actually–dumpling skins for potstickers, which we learned about in the recipe for Yesterdish’s vegetable potstickers. The partially-cooked gluten of hot water dough is tender and the raw gluten of cold water dough protects the dumplings from falling apart in boiling; kneading together provides the best of both worlds.

Orange and vanilla are one of my favorite combinations, and the vanilla-flecked Chantilly cream harmonizes with the orange-scented crumb of the bun. Besides, with olive oil, egg yolk, and butter in the bun itself, why not add cream? As long as we’re sinning, we should sin like sinners.

Chantilly cream to fill the maritozzi