What, you think matzoh comes from a box? 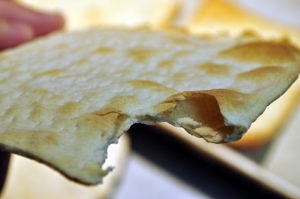 Before we get into the recipe… yes, I’m still alive. It’s hard to explain, but I was sort of kidnapped by my family. I’ve been forced to sit and not work and let puppies lay on my tummy and sleep. It’s all very awful–I don’t know how not to work. I wish Liam Neeson was my dad so he could go and Judo chop everyone in the throat till they let me do something useful.

(Have you seen Taken? The moral of that story is that if someone takes a family member, you should immediately crush the windpipe of everyone you meet until he or she is returned.)

But anyway… Passover started at sundown last night. It’s a week-long Jewish holiday marking, broadly speaking, the events of the book of Exodus generally, and more specifically, the Almighty “passing over” the Israelites when slaughtering the first-born in Egypt.

Matzoh is typically eaten during a Seder, which is a recounting of the story of Exodus, typically in the longest, most obscenely boring method humanly possible.

For an interesting and nuanced look at the history of Passover, see this article in Haaretz. For my purposes, here’s what you need to know: during Passover, observant Jews refrain from eating leavened bread because, according to Exodus 12:39, the Israelites made unleavened bread for the trip because there wasn’t time to let it rise.

(I’m not religious, myself. Growing up, it seemed like every single Jewish holiday was some form of thanking the Almighty for not quite totally exterminating us. Call me a peanut, but when I’m walking down the street and somebody almost kills me with a car, my instinct isn’t to throw him a party. You want a week-long observance from me, you’re going to have to do a little bit better than reminding me of that time you sat on your hands while I was enslaved until Moses showed up. I’m just saying: he had locusts in his pocket the whole time.)

We’ve discussed a bit about the history of matzoh before, in the post for matzoh balls from University Heights, Ohio. If you haven’t read that lately, you should probably start there–it covers the evolution of matzoh and a bit of the tension between automation and religion. 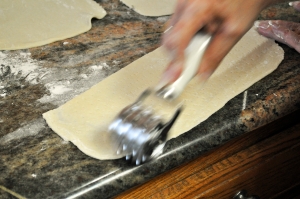 One of the things we discussed in that post was that, for matzoh to be kosher for Passover, matzoh dough must be cooked within 18 minutes of being mixed, because the very early stages of leavening will begin after 18 minutes. (If you don’t care about that, it probably would help to give the dough a 15 minute rest after mixing and before rolling out.) The phrase “kosher for Passover” only has meaning in the context of matzoh, because the only law of kashrut that changes during Passover is the prohibition on eating leavened bread.

One thing you don’t need, however, is rabbinical supervision.

Yes, yes, I know. I know that the all the matzoh boxes in the store say “produced under Rabbinical supervision,” and as we discussed in the matzoh balls post, Rabbi Dov Behr Manischewitz supervised his matzoh directly and even hired other rabbis to certify his work as kashrut. But do you really think that every kosher item on the shelf comes from a factory with a Rabbi wearing a hairnet over his beard?

If you think about it for a moment, you’ll realize it’s not mathematically possible. One certifying organization, Organized Kashrut (the “K” in a circle), certifies over 500,000 products on six continents, employing about 350 rabbis. I’m not a mathemagician, but I think that works out to a little under 1500 products per rabbi. 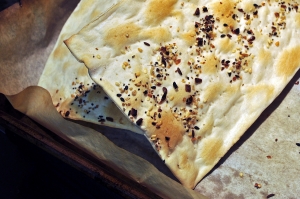 Let me put it this way: most kosher goods are produced under Rabbinical supervision the way that army privates are under Presidential supervision. Both are in charge, but neither one is doing it personally. They have people. In the case of kosher goods, those people are called mashgiach: observant Jews who know and obey the laws of kashrut. At least as the local rabbi interprets them.

In the post for sour milk cookies from Lutz, Florida, we talked about how there’s some flexibility in the interpretation of what qualifies as kosher, and how some rabbis will take a harder line than others. So it’s not always entirely clear what kosher means from product to product, which is why you have organizations like Organized Kashrut. The “K” in the circle not only means kosher in the abstract, but kosher according to the meaning accepted by that specific organization.

Matzoh is typically eaten during a Seder, which is a recounting of the story of Exodus, typically in the longest, most obscenely boring method humanly possible. I assure you that after sitting through a Seder with your family, you are indeed happy just to have survived. (It took me twelve years to realize that my former dislike of hard-boiled eggs was a purely psychological obstacle imposed by my brain to avoid remembering the Seders, in which egg plays a role–but that’s another post.)

Anyhow, because most Seders require the attention span of a statue on Ritalin, there’s a tradition called afikoman, which is either hiding a piece of matzoh with a reward for the child who finds it after the Seder, or something “stolen” by the children to be ransomed back after the meal. And since I like candy, look:

One last thing–this is slightly adapted from the recipe from the Mile End Cookbook, of Mile End Deli fame (which I talked about visiting in the post for Yesterdish’s steak and peanut summer rolls). But hey, didn’t they adapt it from Moses?

Makes about two dozen square matzoh; we doubled the recipe, for what it’s worth.

Salt to sprinkle, if desired