A French-Canadian treat, with stops in Maine and Louisiana. 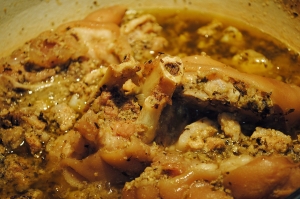 If you ask an American to name French-Canadian food, the conversation would probably begin and end with poutine, although there might be a mention of Tim Hortons (which isn’t really French Canadian, but I’ll give it a pass because Tim Horton did live in Quebec between the ages of 5 and 8–look it up).

It’s sort of peculiar that we know so little, given our obsession with Louisiana cooking. As the cajuns were originally exiled French-Canadians, you’d think we’d bother to investigate the source of their rich, flavorful cuisine. Obsessing over cajun cooking while ignoring French-Canadian cooking is like insisting that The Empire Strikes Back is such a good movie, you don’t want to see Star Wars: A New Hope.

If bacon is the candy of meat, creton is the marmalade.

You are missing out, my fellow Americans. When it comes to your understanding of French-Canadian cuisine, in the words of Yoda, “You must unlearn what you have learned.” Fortunately, Julie has educated me quite a bit in these matters, and I can pass this information on to you. 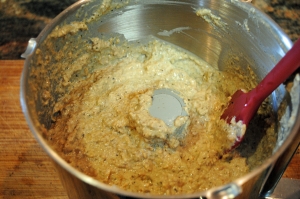 To that end, allow to me to paint for you a very brief picture of the tradition of cabane à sucre, or sugar shacks, in Quebec. Functionally, sugar shacks are where sugar maple sap is boiled into syrup; we used similar structures in Vermont, upstate New York, Ohio, and anywhere else sugar maple trees grew.

But in Quebec, some of the shacks have taken on a secondary role, one inspired by the practical fact that a sugar shack is a warm refuge in the cold months. Many function as tourist attractions, often attached to ski lodges or spas, where a variety of traditional French-Canadian treats are served. 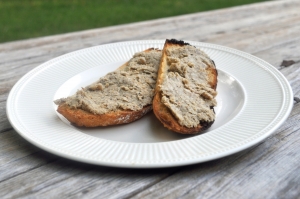 If you’re lucky, you might get a meat pie called tourtière. And if you come for breakfast, cretons. (There might be poutine, but don’t embarrass yourself by ordering it. Everyone knows you go to a casse-croute–a phrase meaning a light meal but used primarily to refer to chip trucks that sell poutine–for that.)

Cretons are essentially the 18th-century ancestors of 19th-century rillettes. In rillettes, pork or other meats are cooked in milk or water until they fall apart, much like cretons. In rillettes, however, the cooked meat is then blended with a large amount of rendered fat (usually from the same animal, though not always). The resulting paste is generally smooth and has a texture much like butter.

It’s sort of surprising, then, that rillettes have become trendy while cretons remain a niche product for most of of us outside Quebec and parts of Maine. Cretons are a leaner alternative with a texture halfway between rillettes and a pâté de campagne–rich but rustic, unrefined but honest.

The tradition of cretons goes back to Acadian hunters. Just in case you need a geography refresher: From the early 17th century until the mid-18th century, Acadia was a French colony that covered parts of Quebec, Nova Scotia, Prince Edward Island, New Brunswick, and Maine. After the French finally ceded control of Acadia to Britain, many of those with French ancestry were expelled; some of those Acadians moved to Louisiana, where they became the cajuns.

But back to the Acadians. Making cretons was an excellent way for Acadian hunters to achieve a number of goals. It can be used to turn the smaller off-cuts of pork into something delicious. It keeps somewhat longer than the meat itself (though not as long as rillettes). And it’s exactly the kind of rich food you’d want to keep you warm on the hunt.

For all of that, I can’t tell you exactly how it got the name cretons. I have a few theories, however. First, cretons translates to greaves, or shins, basically, and as you can see in our recipe here, the feet and foreleg of the pig make great cretons. Second, cretonne is a name of a fabric that was originally made from scraps of flax or cotton, and that had a roughly contemporaneous origin as this recipe for scraps of meat.

But I think the third explanation is the simplest and most likely. 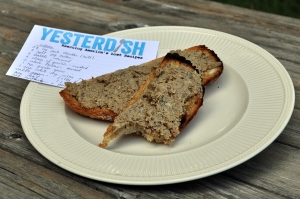 Cretons sounds like a corruption of crotons, which was a 19th century word used for croutons. Crouton itself is a diminutive of croûte, meaning crust. Just as you expect to get butter or jam when you order toast in a restaurant, even though you didn’t order jam, the Acadian hunter might not bother to specify that he wanted cretons with his crotons.

It makes sense to me. If bacon is the candy of meat, cretons is the marmalade. For the photos, I served it on toasted homemade bread with butter–that how Julie said to enjoy it, and she wasn’t wrong. It was difficult to say where the butter ended and where the pork began, but every bite was more satisfying than the best bacon I’d ever had. It was like bacon that knew how to reach every corner of my mouth.

Don’t forget to vote in the poll above!

Add your spices–wine and enough water to cover the pork.

Add your bay leaf. Cook until the liquid is almost all gone. Scrape your fond into the meat; taste and adjust the seasoning.

Once you have a cooked, almost dry, caramelized pork product, pick out the trotters, remove the bones, return the meat and food process it with the milk-soaked bread.