If you’ve never heard of them, you’re confused. If you have, you’re hungry. 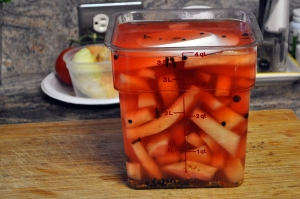 If you’ve ever been to a real Southern barbecue, you’ll notice a few things on that picnic table that Southerners view as their own. Among those items: sweet tea, buttermilk biscuits, corn pudding, mustard greens, sweet potato pie, and if you’re lucky, watermelon pickles–that is, pickled watermelon rind.

But to the extent pickled watermelon rind is treated as a child of the South, it’s an adopted child. By way of Massachusetts.

Crisp, sweet, and tart, with a pickle-like crunch.

Maybe I should back up.

Watermelons are thought to have originated in the southern part of the African continent around 4,000 B.C. By 3,000 B.C. they were being harvested in Ancient Egypt; Watermelon seeds were found in King Tutankhamun’s tomb, and he died in 1323 B.C. 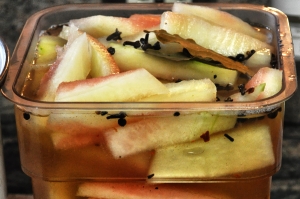 Through trade, diaspora and conquest, watermelons made their way to China in the 10th century and Europe in the 13th century. In the 16th century, French explorers introduced watermelon seeds to the midwest and along the Mississippi river, while Spanish explorers brought them to Florida. By the 17th century, watermelons were being cultivated in Massachusetts.

(Some people like to theorize that enslaved people from Africa introduced watermelon to the continent. Apart from having no basis in reality whatsoever for that assertion, it requires us to assume that Europeans forgot they had watermelons for 300 years before coming to the country, and then ignore that the first mention of watermelon in Massachusetts predates the first enslaved people arriving by over a decade. Or, to look at it from a more practical standpoint, I think the historians who theorize this provenance have grossly overestimated the generosity of the carry-on baggage policies of your average 17th-century Dutch slave galleon.)

The first American cookbook, published in 1796, included a recipe for watermelon pickles. From Amelia Simmons’ American Cookery (though the image below is from the 1798 edition):

The tradition continued right through the Civil War, even though, by the middle of the war, Confederate soldiers were paying $40 to find a watermelon to eat (as sugar was scarce, it was the closet thing to dessert you were going to get in a trench). Here’s a recipe from the August 6, 1861 edition of the Clearfield (Pennsylvania) Republican:

If you notice some variety in these recipes, well, there’s a great variety in pickling techniques in general, and the effect can vary from watermelon rinds that are almost candied to what we’ve produced here, which is crisp, sweet, and tart, with a pickle-like crunch.

Be aware, however, that science has bred a somewhat different watermelon than the ones older recipes would suggest using. When botanists started cross-breeding watermelons, their first goal was to reduce susceptibility to disease, but the secondary goal was to increase the volume of flesh and reduce the size of the rind. Most modern watermelons have rinds that are about half an inch thick; in the 1800s and prior, most watermelons would have a rind about an inch thick. 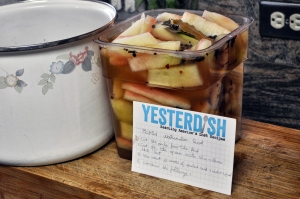 The net result is that following an older recipe that calls for more cooking would result in rinds that fall apart or are candied to the point of being a solid mass of sugar. That’s also why many recipes you find online call for boiling the rinds, which, generally speaking, is going to produce something that more closely resembles the texture of canned pineapple than a sweet pickle. Here, the only heat applied to the rinds is the boiled syrup poured over them twice.

The light cooking has the potential for other, um, “benefits” as well, however. Bear in mind that I’m not a biologist, so feel free to correct me if I’m wrong, but here’s my understanding.

Watermelon rind is particularly high in the amino acid citrulline (which it rather ought to be, as the name citrulline is derived from the Latin word for watermelon, citrullus). Your enzymes convert citrulline into arginine; arginine increases the supply of nitric oxide in the body; and nitric oxide relaxes blood vessels and increases blood flow. Thus, eating watermelon rind can have effects that might overlap with certain pharmaceutical products that also increase blood flow. 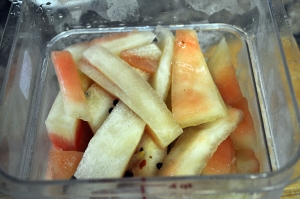 Just sayin’. Apparently those good Southern girls knew what they were doing. That said, to have any hope of this working, you rather need a watermelon rind with some nutrients left in it, rather than one that’s been boiled to death. So yeah, light cooking.

You could eat these anytime you’d have a sweet pickle; they’re just as home in a deli tray as they would be chopped with some jalapenos into a sweet-hot relish, or even next to some pulled pork, corn pudding and mustard greens at a Southern barbecue.