The beer of summer meets the king of appetizers. 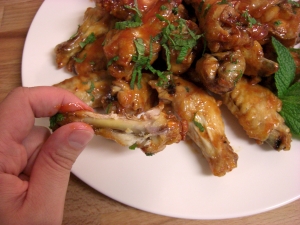 For a recipe of this magnitude of awesome, you need to combine some things that are awesome by themselves, so let’s introduce our primary ingredients before we move on.

Traditionally, a shandy is a mixed drink, made by mixing beer and lemon-lime soda or lemonade. But a few brewing companies (Leinenkugel’s and Shock Top, at least) make a lemon-flavored beer and market it as a shandy, and in my humble opinion, they are fantastic. The lemon nose gives way to a bright, sweet wheat ale. When it’s hot outside, a shandy hits the spot.

It turned into an absolutely addictive glaze, the kind of thing that makes you look around to see if anybody will notice you licking the plate clean to get every drop.

Sriracha is a hot pepper sauce named in honor of city of Si Racha in Eastern Thailand. While traditional Thai chili sauces are sweeter and thinner, what we typically use in the U.S. is the blend innovated by David Tran, the founder of California’s Huy Fong foods. This blend is thicker and hotter, with a primary ingredient of chili, and is a little bit milder than your average jalapeno. 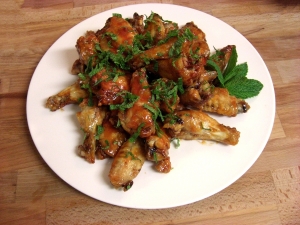 People sometimes colloquially call sriracha “rooster sauce” because there’s a rooster on the printed label of the Huy Fong bottle. Despite the name evoking Thailand, Tran is Chinese-Vietnamese; he chose the design because he was born in 1945, which was the year of the rooster on the Chinese zodiac. Tran came to the U.S. from Vietnam in 1979 and invented the sauce here, making the blend of sriracha we know and love an American original.

And, boy, what can you possibly say about the humble chicken wing, most associated with Buffalo, New York? The story that’s traditionally told about Buffalo wings that they were invented in Buffalo, at the Bellissimo family’s Anchor Bar, in 1964.

While family members have told different stories at different times–either the son arrived with hungry friends (attributed to the mother), or there was a mis-delivery of chicken backs and necks (attributed to the father), or they were invented to serve hungry Catholics after midnight on Friday when they could eat meat again (attributed to the son), everyone seems to agree that someone in this bar, sometime in the 1960s, bestowed upon us the gift of deep-fried chicken wings in a combination of hot sauce and butter. 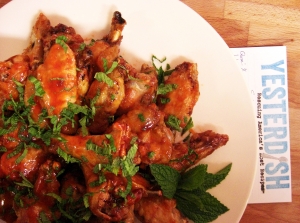 With these as my inspiration, I wanted to make a slightly more modern baked iteration of the classic Buffalo wing. I’ve made shandy-glazed shrimp before (sorry, that was before Yesterdish–Yesteryesterdish, I guess) by reducing mixed berry jam with a bottle of shandy beer. So I tried a few things.

My first glaze attempt was reduced orange marmalade and shandy. Too bitter. My second attempt was fresh lemon zest and juice and shandy. Even though I avoided the pith entirely, still too bitter. So I went back to basics: white sugar and shandy. Still a slight bitterness, but one that’s easily avoided with the addition of red wine vinegar. With sriracha, ginger, and salt, it turned into an absolutely addictive glaze, the kind of thing that makes you look around to see if anybody will notice you licking the plate clean to get every drop.

I really enjoyed the mint. I describe it as optional because I’m sure some people will hesitate, but lemon and mint is a classic Italian combination, and the spice and garlic from sriracha both play well with mint, too.

The method for cooking these wings is Alton Brown’s: he steams them for ten minutes, then cooks them for 20 minutes on each side in a hot oven. His stated reason for doing it this way is to reduce the fat content so the wings don’t smoke too much in the oven, but this has another clear benefit: the steaming helps loosen some of the collagen in the wing, making the crispy baked product pull away cleanly from the bones when you take a bite.

This is as close to a perfect appetizer as we’re going to get in the physical world. The only hesitation I have in suggesting you make this is that you could never possibly make enough.

Cook glaze over medium high heat until it reduces to syrup consistency.

Toss wings in glaze before serving.