It’d be a sin to make pasta dough and not use it, right? 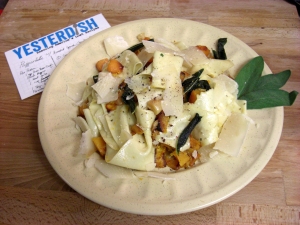 Admittedly, I constrained my options to achieve the goal of highlighting the basic pasta dough recipe. I wanted you to get a good look at the resulting noodles, so they had to be big (like pappardelle) and the sauce couldn’t obscure the texture (hence a butter sauce). But that isn’t to suggest this recipe can’t stand on its own merit; heck, I think it stands, walks, and dances the tarantella on its own merit.

The result is a bite that changes in your mouth as you chew and different flavors are expressed, all of them carried by the butter.

The constituent flavors are squash (I used butternut, but it doesn’t have to be), roasted garlic, sage, Parmesan, 82% butterfat butter, and black pepper. You can tell you’re on the path to a good recipe when you could write your ingredients on pieces of paper, throw the pieces into a hat, and know that any three you pick out would work. 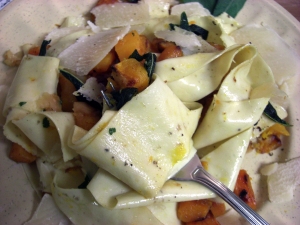 About that 82% butterfat butter. Some people call it “European style butter” or “French style butter.” France requires 82% butterfat by law, but most of the brands we find in markets aren’t French at all. Lurpak is Danish, Kerrygold is Irish and Plugra, which bears “European Style” right on its foil wrapper and a name that sounds like the French phrase plus gras, is made by a domestic agricultural cooperative headquartered in Kansas City, Missouri. 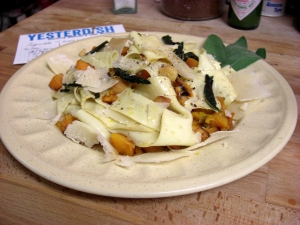 That added richness helps marry the textures of the dish. The squash and garlic are creamy; the sage is crisp, shattering under the slightest pressure; the Parmesan is firm, but crumbles in your mouth; and the pasta has a toothsome resilience that protects the flecks of pepper inside. The result is a bite that changes in your mouth as you chew and different flavors are expressed, all of them carried by the butter.

If you’re the wine-drinking type, this wouldn’t be a bad time to explore some pinot grigio. Again, I’m sorry about my handwriting. And photography. And for any other offense I’ve caused. (I’m not sure what that would’ve been but I find it’s best to apologize first and understand later.)

Oh, and one more note about pappardelle. Traditionally pappardelle would be about 5/8ths of an inch across. Obviously, I’ve made mine much closer to the outer limits of what’s considered acceptable, at about a full inch across. I don’t really believe in using the scalloped edging tool on non-filled pastas, but scalloped edges are a valid option, too.