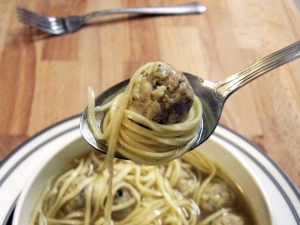 While all recipes are associated with memories within a family, some recipes trigger common memories for Americans everywhere. A grilled hamburger at a summer cookout, dad’s awkward pancakes when mom was sick, and the perversely satisfying grease-soaked tater tots on the school lunch menu are experiences that are simultaneously personal and universal.

But if I had to pick one recipe as the exemplar of this type of cultural connective tissue, it would be chicken noodle soup. And the chicken noodle soup that Dori and I grew up with was brodo with meatballs and the thin, fresh egg noodles called tagliolini (meaning, loosely translated, “small cut things”).

When the weather started to turn and we were going to visit our grandparents, we would sniff as soon as we entered the house to see if we could smell the brodo on the stove. It would steam from the old gas range (which you had to light by hand) and fog up the windows in the kitchen and in the breakfast nook looking out into the vegetable garden and the brick wall of the church next door.

Whenever you have the opportunity to convert low-cost ingredients into high-quality food, I think you should take it.

When I was young, I had the tendency to want to slurp the broth from the bowl to eat it faster. One night, I remember making repeated attempts to do just that, and having my mother and grandfather, sitting on either side of me, place their hands on my forearms and ease the bowl back to the table. Ordinarily this level of intervention in my process would’ve resulted in a fit (try to stop me from eating something today and see what happens), but I wanted the soup and storming off would’ve meant not finishing it. The rage was strong, but the lure of brodo was stronger.

And yet, with all of those specific external details, brodo with meatballs feels the same way you feel about chicken noodle soup from your own childhood, whether it was served because you had a cold, or you grew up eating it from the deli down the block, or it was Monday’s lunch after Sunday’s chicken dinner. Those memories of warmth and calm, and being nourished in that way only marrow nourishes, are the universal experience of chicken noodle soup. As much as tater tots are institutional and impersonal, chicken noodle soup means that you’re home and everything is going to be okay. 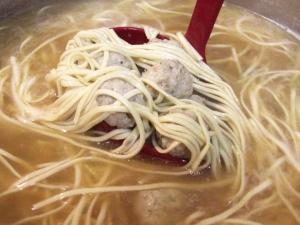 All of that said, I almost didn’t make this. The more traditional holiday soup is brodo with tortellini, and I was prepared to go ether way. But Dori came over when she heard I’d made the meatballs and the stock and when I asked her which she thought I should make, she said back to me something I’ve written here over and over again: “Authenticity is personal.” (We had tortellini in brodo lots of times, too, but never with meatballs. I’ll make you tortellini sometime, too.)

This isn’t exactly how my mother and grandmother make it–the big difference is that their meatballs are even smaller. The reason my meatballs are this size is that the smallest thing I could find in the drawer was a teaspoon measure. If I’d found a half-teaspoon, I’d have used that, or a melon baller. Their meatballs are about two-thirds the size of these. And I’m not certain what proportions they used in their meatballs, but I’m going to call them tonight and ask.

So with that obnoxiously long introduction, let’s talk about this recipe.

This is a truly old school recipe, in that it calls for finding cheaper, bone-in cuts of meat and using every part to contribute to the final product. I used four chicken leg quarters (about $6) and a bone-in pork loin chop (about $5). (It says a lot about the sorry state of our grocery stores that I couldn’t find a whole chicken. Not a single whole chicken in the entire store.) Ordinarily I like to do half-and-half pork and chicken, but the grocery store had these proportions, and it still gets good results–as long as you have at least half as much pork as chicken, you’ll be okay. 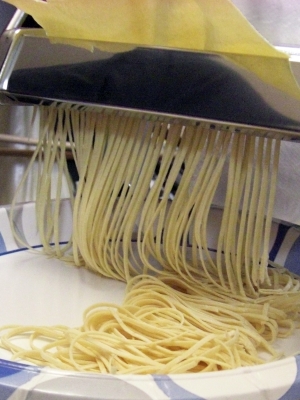 Among the things I had laying around were Parmesan rinds. If you throw out the rind of your Parmesan when you get to it, you’re making a huge mistake. Parmesan wheels aren’t coated in anything–the rind is just the cheese dried hard by the air. Save them in the fridge, then give them a good washing and put them in your soup; they’ll infuse the soup with flavor and melt enough to be edible with bread at the table. Whenever you have the opportunity to convert low-cost ingredients into high-quality food, I think you should take it.

I boned the pieces out roughly–I didn’t really care about leaving some meat on the bone, because it would help the stock. My goal was to remove anything I didn’t want in the grinder. For the chicken, adding the skin to the stock improves the color of the stock a bit; for the pork, the chop was pretty lean, so I put all the pork fat in with the meat for the grinder. If you end up with a fattier piece of pork, feel free to throw some fat out.

While you could make a meatball for other purposes based on this recipe, this is far from a traditional meatball–it’s adapted to the needs of the soup. A lot of meatball recipes use the old Italian standby of milk-soaked bread to help retain moisture. In this meatball, only dairy is the Parmesan because I didn’t want anything to cloud my brodo. Instead, oats absorb moisture from the meat and stock and almost dissolve into the meatball. I ground the meat with a fairly coarse plate because that’s my preference, but you could use a finer grind if you like. 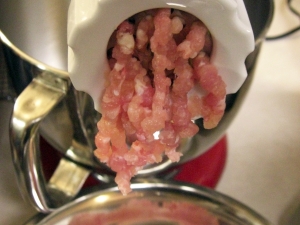 (Hypothetically you can do this with the food processor, but chopped meat and ground meat aren’t quite the same and I really prefer the ground. But if you don’t have a grinder or the interest to obtain one, consider that an option.)

Tagliolini are the thinner counterpart to tagliatelle and use the exact same traditional dough–a hundred grams of flour to one large egg. In rolling out the noodles, I only made one egg of pasta dough (it was just Dori and me eating it), and I cut that sheet into four sections about seven inches long before cutting the tagliolini. If you like longer noodles or shorter noodles, you can cut them to your liking, but keep two things in mind: one, you want them to be long enough to pick up with a fork, and two, you want them to be short enough that you can grab a few and not worry about getting a giant mass of pasta on your spoon.

If you don’t want to make your own pasta, these are the sort of pasta you see dried in nests, but it’s pretty rare to find store-bought dry tagliolini that are made with egg. Frankly, if you’re inclined to substitute, focus on using egg noodles more than on the specific shape. 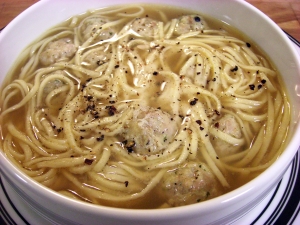 When Dori tasted the soup, she said this was the recipe she’d been asking family members about for years and everybody looked at her funny. I realize now what she was asking about–she didn’t realize there was pork in the stock. I mentioned kind of casually in the post for Yesterdish’s chicken stock that I like to put pork in my chicken stock, but I didn’t really explain why, and it’s not easy to articulate a flavor, but here’s my attempt: when you mix pork bones and chicken bones in a stock, it produces all of the flavors of both, but then takes on a third flavor that’s not present in either individually. The closest common cultural touchstone is the flavor in the background of restaurant wonton soup, but it’s more pronounced (and less salty) in this preparation.

I realize that this recipe might strike you as stupidly easy or stupidly complicated, depending on how you feel about cooking. Such is the risk of addressing honest and universal food; we all desire chicken noodle soup so much that we have come up with methods to acquire it that are both easier (like using prepared stock) or harder (like using a pressure cooker).

But picking a recipe because you like the process is like picking a vacation destination based on the in-flight movie. And if you want to go to the place where you feel warm, happy, and at home, this is your ticket.

(Measurements are approximate–don’t be a slave to them.)

Remove bones and chicken fat to pot for stock; grind meat with 1 onion.

Makes about 8 dozen meatballs and 1 gallon of stock; each egg of pasta dough makes tagliolini for four bowls.