From The Greenbrier P.E.O. Cookbook.

You’d be forgiven for assuming that cookbook originated with The Greenbrier, the resort outside White Sulfur Springs in West Virginia that’s been around in some form since 1858. (I’m sure we’ll talk about it at some point–it’s hosted presidents and war criminals, at various times, and had a bunker built under it for Congress to survive a nuclear war–why that’s a priority, I can’t imagine.) But actually, the referenced cookbook was merely from the resort’s neighbors.

The Greenbrier P.E.O. Cookbook was released in 1978 by the P.E.O. Sisterhood chapter located in Greenbrier County, Chapter F. The Sisterhood started as a “secret society” founded by seven students at Iowa Wesleyan College in 1869 and grew to about a quarter of a million members before telling anyone what P.E.O. stands for. (Their website currently explains that it’s Philanthropic Educational Organization.) 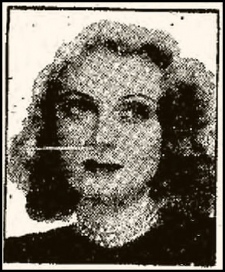 Here’s a version from actress Judith Evelyn, born Evelyn Morris in South Dakota and probably most familiar to us from her role in Rear Window, which she shared in the April 6, 1947 edition of the San Antonio Light:

My version of recipe in Greenbrier Cookbook.

Believe I could substitute 2 cups of macaroni in lieu of bread crumbs.