Let’s talk a bit about the chuck wagon, a cross between a kitchen and a roll-top desk.

The most legendary culinary job in all of American history is probably the cattle drive cook, or “cookie.” While kids looked up to cowboys, cowboys looked up to the cook. You’d never know it from the way Hollywood has portrayed the wagon cook, which is either as an unreliable flake or a feeble old man, and always as subservient to the cowhands.

The reality was exactly the opposite. The wagon cook was usually one of the toughest men on the drive. He had to wake up hours before the cowhands to make breakfast and stayed up later to secure the chuck wagon (chuck being a slang word for food, like chow). When the herd was being driven from location to location, he rode ahead on the wagon to set up a meal at the next stop, facing any dangers–human, animal, or environmental–either alone or with minimal support.

A Cookie not only maintained all of the food for the drive; as he had one of the few wagons on the ride, he kept many of the tools, much of the ammunition, and all of the money to be distributed along the way. He’d also have whatever medical supplies came along for the ride and was expected to know how to use them.

And it didn’t hurt if he knew how to cook, too.

The cook held the success or failure of the drive in his hands. But because of the diverse skill-sets required, it was a tricky job to fill, and one that commanded a salary that hovered around double the salary of the other cowboys on the ride. A Cookie would be second in command to the trail boss, and even the trail boss had to maintain a degree of deference to his Cookie’s decisions.

(A trail boss was in charge of a wagon cook in the same way that a restaurant patron is in charge of his waiter. Imagine the results of upsetting the waiter at a meal, then imagine this is the only restaurant in town, the waiter gets to order for you, and you have to eat three meals a day for sixteen weeks. Under these circumstances, you would rapidly come to discover the value of being extremely polite in issuing directives.)

The wagon cook was the Renaissance man of the cattle drive, and the chuck wagon was his workshop. At least, after it was invented in 1866 by Charles Goodnight. 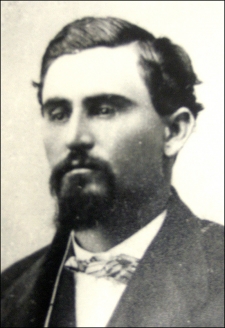 If you’ve studied any amount of cowboy (or Texas) history, you’ve probably read about Charles Goodnight. For lack of a better descriptor, he was a real-life composite of every character John Wayne ever played: rugged, quiet, hard-working, impossibly accomplished, and basically decent, despite rough edges and a preference for justice over the rule of law.

He was born in Illinois on March 5, 1836, the day before the fall of the Alamo. His family moved to Texas when he was nine, just before Texas was granted statehood. (Yes, I know Wikipedia says he arrived in 1846. I don’t know what to tell you. My sources say 1845.)

Before the Civil War, he worked as a cowboy, fought Comanche in a town militia, and became a Texas Ranger. When war broke out, he enlisted in the Confederate army.

(While some people called him “Colonel,” it was most likely an honorific. There’s no evidence he achieved a rank any higher than private in anything I’ve been able to find.)

After the war, Goodnight returned to Texas. In 1866 he worked with cattle ranger Oliver Loving to to drive a herd of 2,000 cattle Northwest, creating what would come to be known as the Goodnight-Loving Trail.

It was a long trip. Here, see for yourself: 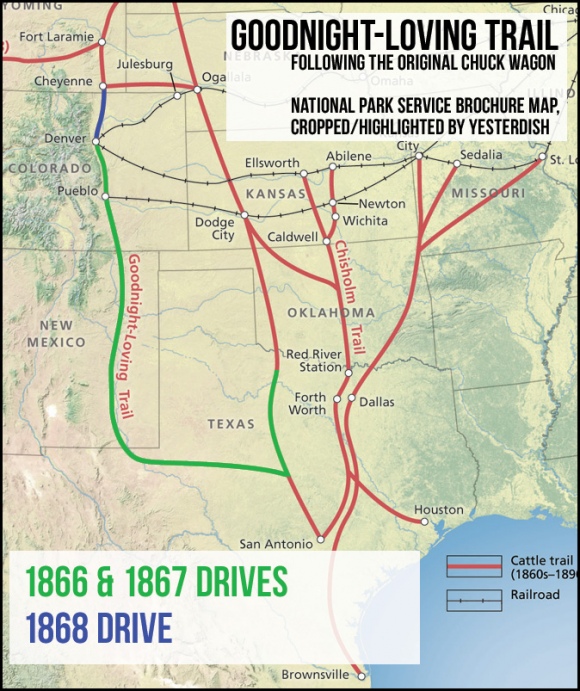 To accomplish this ride, Goodnight decided there was a better way to carry provisions than what he’d been accustomed to. Before the chuck wagon, trail food was whatever a cowboy could fit in his saddlebags, which tended to mean a lot of jerky and dry biscuits for the 12 to 16 week trip.

To improve life on the trail, Goodnight created the chuck box, a tall collection of shelves and drawers covered by a hinged piece of wood. The shelves and drawers would carry dry provisions. When loaded on the back of a wagon, the hinged cover folded down and legs folded out to form a table upon which the wagon cook could prepare meals.

The original chuck wagon was a U.S. Army Civil War surplus wagon built by Indiana’s Studebaker Brothers Manufacturing Company, better known for manufacturing cars from 1905 to the mid-1960s. The inside of the wagon was used for storage, and while the chuck box was the focal point of the wagon, its entire function was converted to logistics and support for the cattle drive. Kindling would be suspended on a tarp underneath the wagon; water would be kept in barrels carried alongside; cupboards toward the front would carry tools for fixing everything from a horse’s shoes to a human’s bite.

A water-resistant cloth would be stretched over the top of the wagon to protect the provisions inside. When making camp, this would typically be peeled off for easy access to the contents of the wagon; in some configurations, it could be peeled back from the front bows and supported with legs behind the wagon to become a lean-to awning over the food preparation area. And when it was in this configuration, it was, in essence, the beating heart of the camp, the position around which all other decisions were made.

The wagon needed its own fire, so a flat, dry, and clear section of land would be required. That part was typically easy. But then, the entry of the camp had to be far enough from the chuck wagon that no dust would be kicked up and enter the food. No horses could be hitched too near the wagon (let alone to it) in case something spooked them and the wagon was spoiled. 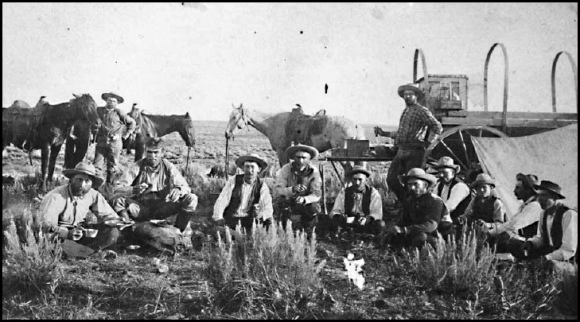 But once all of those requirements were satisfied, the food produced from the wagon would be whatever could be made from things carried along the trial. All of that said… what did the Cookie have at his disposal?

Cornmeal, coffee, lard, tobacco, dried beans, dried beef and salt pork were omnipresent essentials–if any of them wasn’t available, the drive would likely wait to stock them before moving onward. If white flour was available, that’d be stocked, too, along with a sourdough starter; this tended to be more common on the Western portions of the trail and less common in Texas. Dried raisins, dates, and prunes would be around, along with “airtights”–canned goods, most frequently tomatoes.

Along the way, cowboys would sometimes happen upon game birds or rabbits, but it wasn’t a priority and there wasn’t a great deal of organized hunting going on. If a town was available, other than restocking the wagon, the most frequently obtained “treats” tended to be milk, buttermilk, spices, and beef.

(Another strange assumption people make is that there was a lot of beef on cattle drives. There was dried beef, it’s true, but it’s not like anyone was butchering a calf along the trail. This was almost entirely because of the extra time it would take–actually, in the early years of drives, a calf born en route was killed and left just to avoid having it slow down the herd. Eventually, Goodnight developed a wagon specifically to carry the calves to market.)

By the way, Charles Goodnight had a long life after this invention, and would ultimately come to outlive it. He became an employee and partner in the JA Ranch, the first ranch in the Texas panhandle, which at one point covered over a million acres, before starting his own ranch. He’d use some of his wealth to start a school, Goodnight College, which would close in 1916, and the now-abandoned town of Goodnight, Texas was named after him.

After his wife’s death in April 1926, he took ill. He’d been corresponding with Corrine Goodnight, a distant cousin who was a nurse in her 20s, which started because they noticed they had the same name. She came to take care of him. In March of 1927–two years before he died–Charles Goodnight expressed the desire that Corinne inherit his estate, so the 91-year-old Charles married the 27-year-old Corinne, giving her the improbable name of Corinne Goodnight Goodnight, which sounds more like a Bond girl than a deeply religious nurse.

So, given all of this information, how does this recipe fit in?

Looking at the recipe on this card, very few of these items were available to a chuck wagon. In fact, one of them in particular didn’t even exist in the States until there weren’t any wagon trails: corn chips.

By the end of the 19th century, long-distance cattle drives were unnecessary; enough rail had been laid that move cattle by railroad was cheaper and easier. Meanwhile, corn chips made from fried masa (which we’ve talked about a lot, most recently in the post for Yesterdish’s Hot Tamales) entered the U.S. market in 1932, when San Antonio’s Elmer Doolin bought a local recipe for the snacks from Mexico-born Gustavo Olquin, who called them little fried things, or fritas. Doolin named his company the Frito Corporation… but that’s another story.

Separate biscuit dough into 10 biscuits. Place a cheese cube in the middle of each biscuit; fold in half; firmly press edges to seal. Dip biscuits in milk and coat both sides with crushed corn chips.