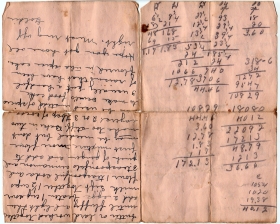 The note was written on a piece of paper folded in half, like a greeting card; on the inside back “cover” of the card, written upside-down, were some math problems. Figuring out the household budget, maybe?

I’m guessing from context that the thing that looks like a seven in the upper right hand corner is the letter F, so that the letter is written from Powell, Ohio, R.F.D.1. “R.F.D.” stands for Rural Free Delivery. In the days before mail was delivered right to your door, you’d go and pick it up at the post office; in a lot of towns, the post office was also a general store. (In the West, it wasn’t uncommon for the post office to also operate a saloon.)

Some of that has to do with how post offices were created in the 19th century. Formally speaking, the Postmaster General appointed local postmasters (except in the big cities, which were usually picked by the President, in much the same way someone becomes an Ambassador now), based on recommendations. Those recommendations could come from the outgoing postmaster, or political figures, or wealthy landowners.

Postmaster was a part-time job, and the only requirement in setting up post offices was to post a bond, to live in the community where the post office was to be located, and that the post office should be along a mail route. Because everyone went to the post office to pick up mail, it didn’t hurt if the postmaster located the post office near his full-time business, whether that was selling cracked corn or slinging whiskey.

After the Civil War, the post office started free hand-delivery of mail in cities (which created its own obstacles, because until 1912, the mail had to be physically handed to a person to be delivered–after all, nobody had a mailbox or mail slot until someone started to bring them mail–meaning that carriers would wait at each door for someone to show up, or try again later). Rural customers, who made up about 65% of the U.S. population, still had to ride into town.

That started to change in 1890, when Congress started to test carrying mail out to rural customers. (Congress dragged its feet, supposedly because of the fear of the high cost of delivery, although it was just as likely because they liked having postmaster jobs to dangle in front of potential donors.) Limited tests continued until 1896; by October 1897, Rural Free Delivery reached 29 states. Then, in late 1899, the post office decided to try offering the service nationwide.

In 1901, the First Assistant Postmaster General prepared a report on the success of this pilot program. Among the places which had R.F.D. routes in place, there was Powell, Ohio, which was small enough that it only merited one route:

The experiment was deemed a success and rural free delivery became permanent in 1902; while the word “free” was formally dropped in 1906 (because it was implied), the name persists even today in some mailing addresses. (While the post office makes it easy to change your address when you move, changing your address when you’re in the same place is not so simple, and when you have institutions like schools, nobody’s particularly interested in devoting the time.)

The last time most of us encountered R.F.D., however, was when Andy Griffith left the Andy Griffith Show, and it became Mayberry, RFD.

I forgot to write down that recipe for meat loaf so I will send it to you.

Make into loaf and bake 1 hour. 1 cup tomato juice can be added after the first half hour.

2 cups brown sugar and 1/2 cup butter or lard worked together until fluffy and light. Then add 2 eggs beaten, 1 cup sour milk. Sift together 1-1/2 cups flour, 1 teaspoonful soda and 3 teaspoonfuls cinnamon and pinch of ginger and add to first mixture. More flour may be needed but don’t make too stiff. Bake in two layers.

2 or 3 Tbsp. of cocoa may be used instead of spices to make Devil’s food cake. I usually put a handful of raisins that have been floured in the spice cake.

Hope you got home all right. Must ring off.

sour milk
Milk that has either started to turn or has fully turned sour (as in, expired). Imparts a tangy flavor to the end product in baked goods. Substitute buttermilk if you find you can't bring yourself to intentionally use sour milk.
sweet milk
Fresh whole milk, so called to distinguish it from sour milk.