Have you ever noticed that prunes are black, but plums aren’t? Prunes being dried plums, you’d think they’d resemble each other. But there’s a reason for that. 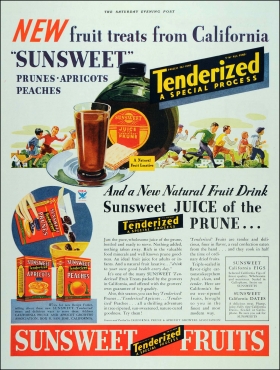 Prune cakes like this one were especially popular during times when sugar was rationed, but the types of prunes you’re likely to get today aren’t entirely interchangeable with the ones you got in the past. Until the 1930s, the typical prune you’d encounter was a plum that had been dried until it was at a moisture content of about 20%; these prunes tend to be purplish-red or gold with golden flesh. Y’know, like plums.

The down side is that, at 20% moisture, a prune is a bit like a fruit leather–sort of like dried apricots. Turning them into something you could bake into a cake requires a long period of cooking, or stewing.

In the 1930s, companies started selling “tenderized” prunes, which were dried plums with a bit of moisture added back to bring them to about 30% moisture. As the ad above says, these cooked “in half the time.” One slight side-effect: to prevent the partially rehydrated plums from molding, an acidic salt is added–potassium sorbate. It turns the prune black.

Here’s a similar recipe from the October 19, 1916 edition of the Spirit Lake (Iowa) Beacon:

For more on rationing and prunes, see the recipe for prune cake from Canby, Oregon.

Put together with a white boiled frosting.