The state of the art of pineapple around the turn of the last century. 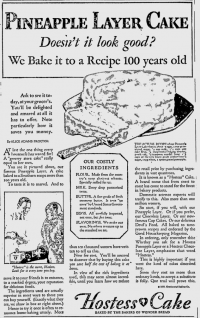 Did you ever get a new haircut and look in the mirror and it suits you so well that you have trouble remembering what your hair looked like before? Well, recipes can be like that, at times. Sometimes, an ingredient can become so associated with a particular preparation that we have a difficult time thinking of it any other way.

That’s kind of the effect that pineapple upside-down cake had on pineapple. If you asked 100 people, Family Feud style, to name pineapple recipes, the top five answers would look something like this:

But here’s the thing. Pineapple was well known long before it was generally available to Americans; George Washington enjoyed pineapple in 1751 in Barbados, for example. Additionally, pineapples started to become regularly available to the American public around 1880, when steamships started carrying pineapples (sometimes preserved in glass jars, sometimes fresh) from South Asia to American shores.

(Don’t misunderstand, we knew what pineapple was before the 1880s; but it was like the McRib. Sometimes they had it, sometimes they didn’t, and it was out of your control.)

So if we had pineapples decades before the top five things we can think to do with them, what did we do? Based on this table, we made pineapple syrup, we ate them from cans, and we ate them fresh when we could get them.

But we did quite a bit more, including pineapple shortcake, pineapple beignets, and of course, the now deposed king of pineapple desserts, the pineapple layer cake.

Here’s a very fancy version from the June 11, 1890 edition of The Vermont Watchman, created long before its inverted, brown sugar-enriched cousin was a twinkle in James Drummond Dole’s eye:

Of course, just because you could find a pineapple didn’t mean you knew what to do with it. Consider this helpful educational blurb from the April 30, 1909 edition of The Ogden Standard (from Ogden City, Utah):

So what changed? The cost of pineapple, for one; in 1910 a two-pound can of pineapple cost about 30 cents, equal to about seven and a half dollars in modern currency. At the same time, an entire pineapple cake could be had for about a quarter from a bakery, and a pound cake for a dime. Once the price of pineapple started to decline, we could afford to put more pineapple actually in the cake.

But the other major change was when the Dole company invented a machine to slice the pineapple in 1911. See, canned pineapple until that time came crushed, chopped, or in solid blocks. Once the pineapple could be had in attractive, geometrically perfect rings, it seemed a shame to chop them to bits and hide them inside the cake.

Put pineapple on top, while soft.