A recent addition to a long Italian tradition. 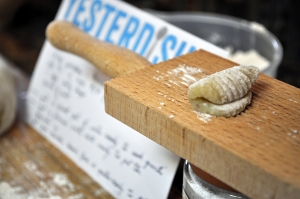 When we talk about brilliant innovations, we tend to focus on the large strokes of genius, like the invention of television or the jet engine. And while those are impressive accomplishments, this shouldn’t diminish the accomplishment of small flashes of genius that have a big impact, like the remote control or the in-flight beverage service.

The evolution of gnocchi most certainly took the second path. But before we talk about that, I should mention that this is one of two kinds of gnocchi we typically eat, the other being ricotta gnocchi.

At least, my mother and I call it gnocchi. Dori insists it’s something else.

The distinctive thing about gnocchi is the shape–curled over with ridges on the exterior, providing surfaces to catch and hold sauce.

Mmph. Well, ricotta dumplings existed a couple hundred years earlier than this version. Potato gnocchi (a name that’s either from the Germanic word for knot or Italian for knuckle, depending on who you believe) didn’t exist until the late 18th century, but it’s helpful to understand a little bit about the evolution of dumplings and pasta in Europe before we get to that.

Deep breath–the history of dumplings in Italy is going to take a little while to explain.

In the post for Yesterdish’s pantry fideos with clams, I mentioned that the Arabs, the Greeks, and the Etruscans all had forms of pasta (that is, dough made from wheat flour and eggs). So why is Italy so associated with pasta?

Because the Italians thought to do something nobody else in the West had done: they boiled the pasta. 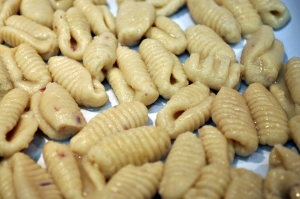 Seriously. The Ifriqiyan Muslims fried their pasta; the Greeks grilled theirs on hot stones; and the Etruscans baked theirs. Until the Middle Ages, boiling food, then removing it from the liquid and serving it dry, wasn’t used as a form of food preparation.

While that seems like a shock to us in the modern world, think of it in terms of the concerns of the Medieval world: water generally wasn’t good for you. There wasn’t really a clear concept of sanitation, and for the most part, people who had enough money drank beer. If you were lucky enough to find a source of clean water, you weren’t generally inclined to use it in an application that requires you to discard it at the end.

(Note that while the Chinese traditions of boiled noodles and dumplings started at least twelve centuries earlier than the Italian efforts, in those cases, they were cooked in soup, and the soup was consumed as well. Typically, noodles or dumplings to be consumed without soup were steamed–a practice that the Chinese were exceptionally familiar with, given that it was an essential step in the processing of tea from ancient times until the 13th century, when roasting dry leaves became more common.) 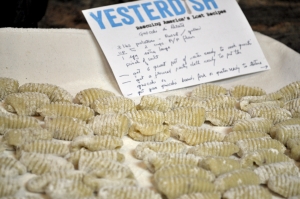 It was sometime around 1000 A.D., give or take a couple centuries, when the Italians boiled their flour and egg paste, or maccheroni (a word of uncertain and contested origin).

While pasta would be made with fresh flour, the early dumplings were made with stale bread.

Around 1465, chef Martino da Como (who would go on to be chef for the Vatican shortly thereafter) wrote his Libero de Arte Coquinaria, or the Art of Cooking, where he included a recipe for zanzarelli dumplings (the name’s origin is likely a mishearing of a vulgar form of a dialect phrase meaning “to chew”). These dumplings were made from stale bread, Parmesan, and egg, and served in soup.

Martino included three versions: a red, flavored with saffron; a green, flavored with herbs; and a white, made with almond milk. There’s also a version where the dough is stirred into the soup without being formed–eventually, that evolved into stracciatella, sometimes described as Roman egg drop soup. But we’re talking about dumplings today. 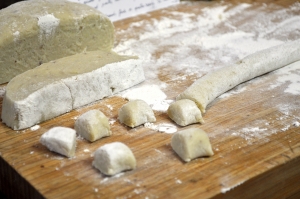 In Trento, zanzarelli evolved into canederli, bread dumplings made with speck, herbs, and nutmeg. Many sites claim that canederli are derived from knödel, the German-Austrian equivalent dumpling, but there’s really no particularly strong evidence that I’ve seen to support that notion. (If you care, click here and I'll explain why I don't think there's evidence that knödel predate canederli. If you don't care, move on...) By the 16th century, ricotta came north from Sicily. In 1570, Bartolomeo Scappi wrote about ricotta-stuffed pasta like tortellini in his Opera dell’arte del cucinare. By the 1600s, when filled pastas were now traditional in the North of Italy, a variety of dumpling called malfatti (meaning badly made) emerged in the South made from Parmesan, ricotta, egg, spinach or chard, and enough flour to make dumplings. Later, Tuscans would call them gnudi, meaning naked–as in, filled pasta with the exterior removed. 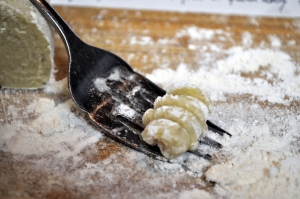 Which brings us back to Dori’s position: that there’s no such thing as ricotta gnocchi, there is only gnocchi from potatoes and gnudi from ricotta.

I disagree. The distinctive thing about gnocchi is the shape–curled over with ridges on the exterior, providing surfaces to catch and hold sauce. You can use a fork, but there are gnocchi boards that make even more ridges. (In a pinch, rolling a whisk along the rolled dough before cutting can work.) That shape is what makes gnocchi special–that, and the light texture and subtle flavor when properly made. The two tricks are to remember not to over-work the potato (else it becomes glue-y) and to use as little flour as possible. Because the moisture content of potatoes vary, you’ll need to trust your fingers.

Don’t be upset if it’s not perfect the first time. Potato gnocchi is a skill it takes a long time to master. (As opposed to ricotta gnocchi, as we’ll see soon…)