A component we tend to either under-think or over-cook. 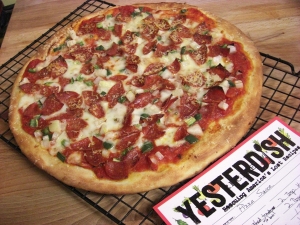 When I shared the pizza dough recipe a few weeks ago, I made a potato pizza, which doesn’t use sauce. I could have tacked this recipe onto that post anyway, but I wanted to talk about pizza sauce at length. I think people tend to focus on mastering pizza dough, then don’t think about the sauce.

I’ve thought about it a lot, and this is where I am, at present: I used canned crushed tomatoes and season them, without cooking them again as an intermediate step.

When you find you’re tasting it three times in a row because it’s so good you want to eat it with a spoon, it’s done. 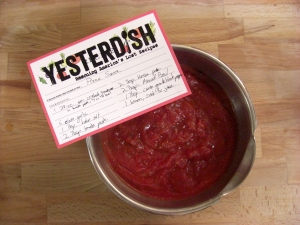 Could you make a sauce from fresh tomatoes? You can, and I have, lots of times. I started by scalding them to peel them; seeding them; salting them to soften the flesh; and sauteing them with, among other things, tomato paste. At which point, I’ve managed to recreate about what’s happened in the can so far.

Could you cook a sauce starting with canned tomatoes? You can, and I have, lots of times. I would saute the garlic in olive oil, then pour the tomatoes in, reduce them in the heat somewhat, and add a little less tomato paste. But the tomatoes were cooked in the canning process, and they’re going to be going into a 500-degree oven in a thin layer for a few minutes. Why cook them a third time? 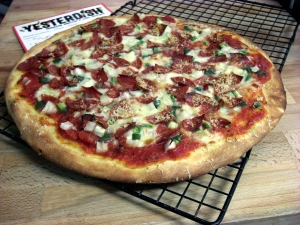 The only ingredient going into the sauce that would benefit from being cooked is the garlic, which can give people an upset stomach in its raw form. To avoid that, I cream the garlic with the salt (the picture of the garlic above the recipe discusses the technique). The salt breaks down the starches that people can have trouble digesting. Between that and the trip in the oven, there shouldn’t be any digestive issue.

A few more notes on this recipe. Harissa paste is an ingredient, originally from Tunisia, made of hot peppers, coriander, caraway, garlic, and salt. If you can’t find it, you can substitute any hot pepper paste (even sriracha would work). And if you don’t like the heat, you can omit it entirely. Also, I like a sauce with pieces of tomato; if you don’t, a few seconds with a hand blender can fix that. I also usually don’t put oil in pizza sauce; I tend to give the pizza a quick brush/spray/drizzle, so oiling the sauce and the pizza feels like overkill.

The best thing about a recipe like this is that you can taste it as you’re making it. That makes it easy to tell when you’re done. When you find you’re tasting it three times in a row because it’s so good you want to eat it with a spoon, it’s done.

Mix all ingredients together and taste for salt. (More salt will be needed if you aren’t using salty toppings like anchovies, capers or cured meats.)

If a less spicy sauce is desired, omit harissa. Don’t replace with tomato paste; it’ll get too sweet.