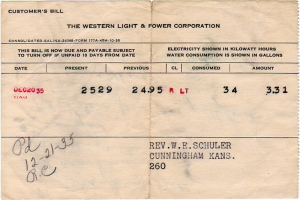 Here’s the front of the bill this was written on. Interestingly, in April of this same year, the Western Light and Power Company held a cooking school.

While it may seem odd to have a power company teaching people how to cook, the lower cost of electricity in the 1930s (as compared to prior years) led to the popularization of a technology that had existed for a few decades, but had been cost-prohibitive: the electric stove. And as anybody who has worked with both gas and electric stoves can tell you, they are indeed very different, and you need to learn to use them.

Even decades later, power companies (and gas companies, for that matter) would circulate pamphlet-like “cookbooks” to encourage the use of electric power. I’ve got a few I’ll dig up later, including “Beef-o-Rama Recipes 1967: From Polly Pacific’s All Electric Kitchen,” put out by the Pacific Light and Power Company. 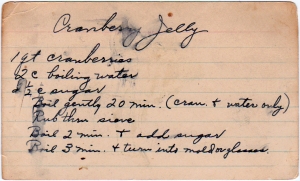 Here’s another copy of the same recipe from the box, with slightly different instructions.

Put in stew pan and boil gently for 20 minutes.

Rub through a seive.

Boil 3 minutes and turn into mold or glasses.